The Pain Game An exhibition project by Ellen Blumenstein 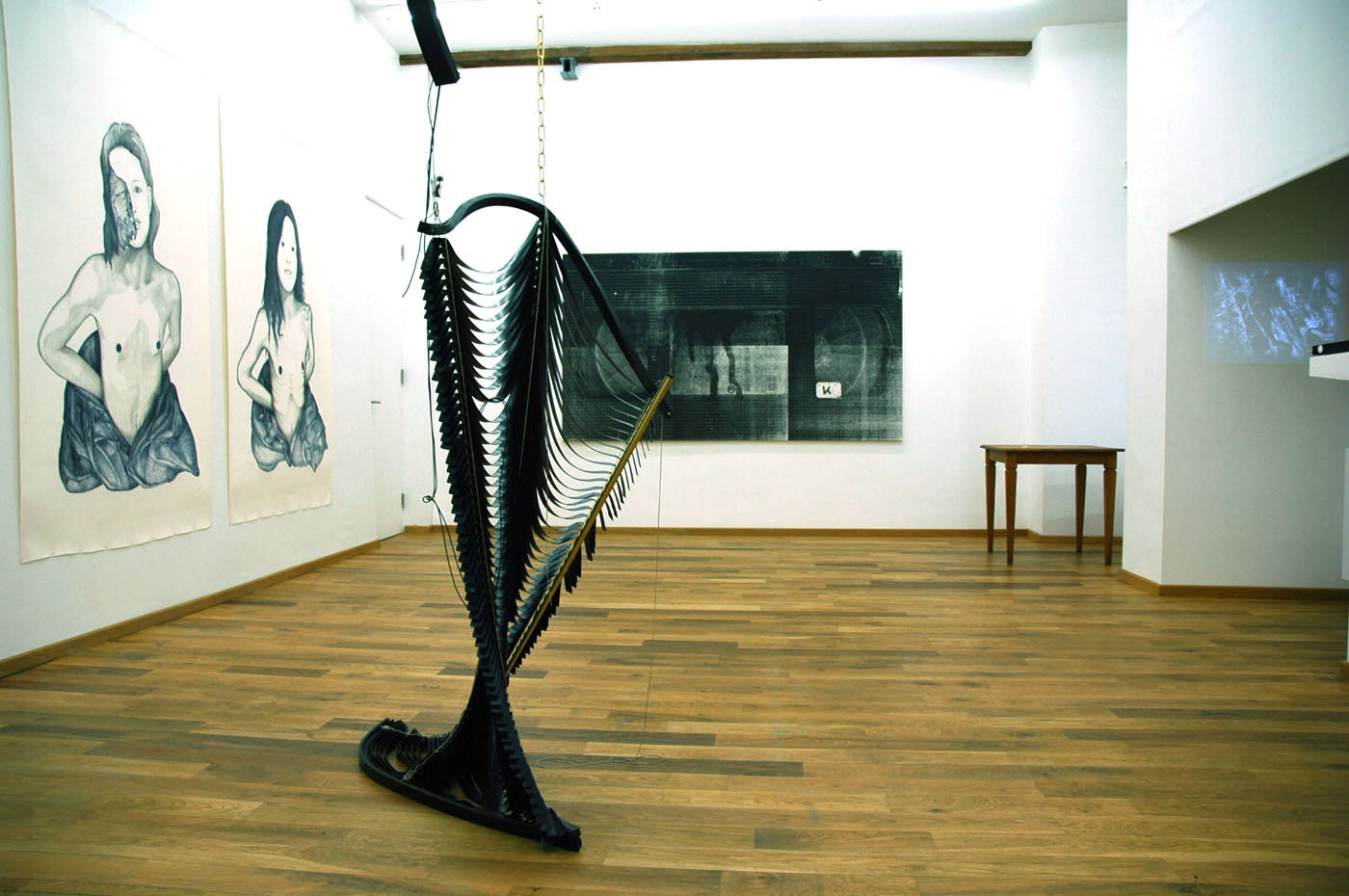 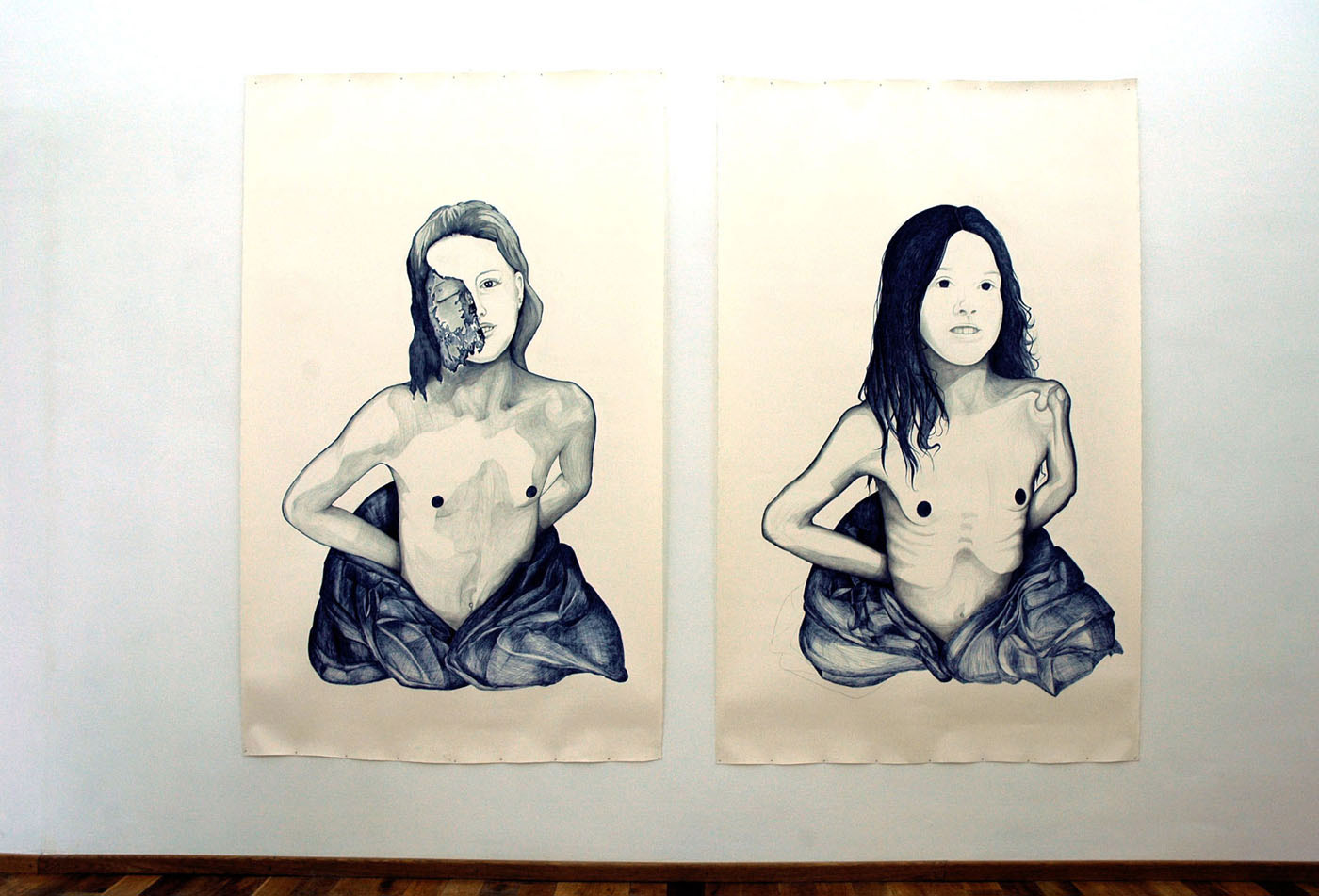 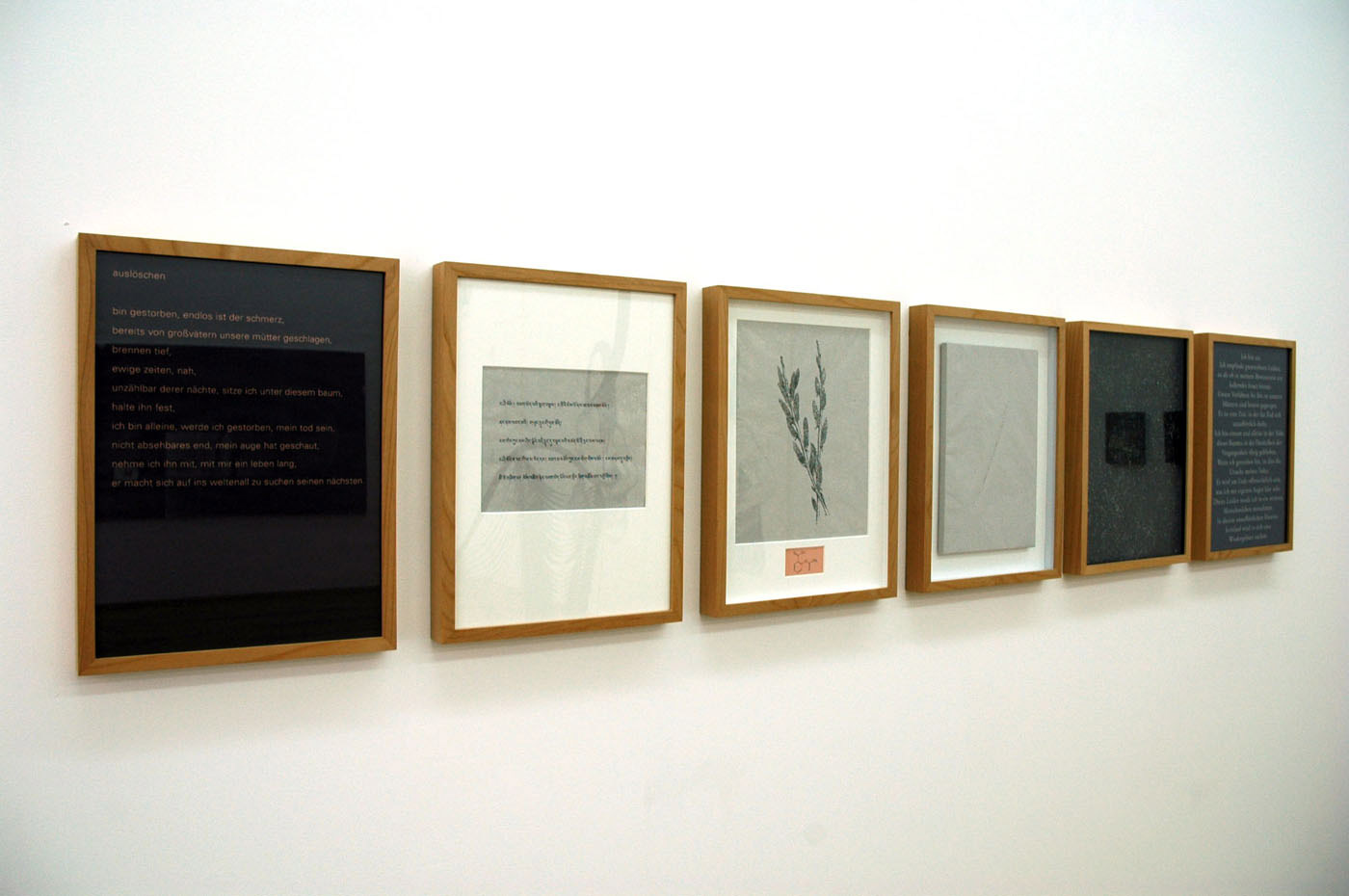 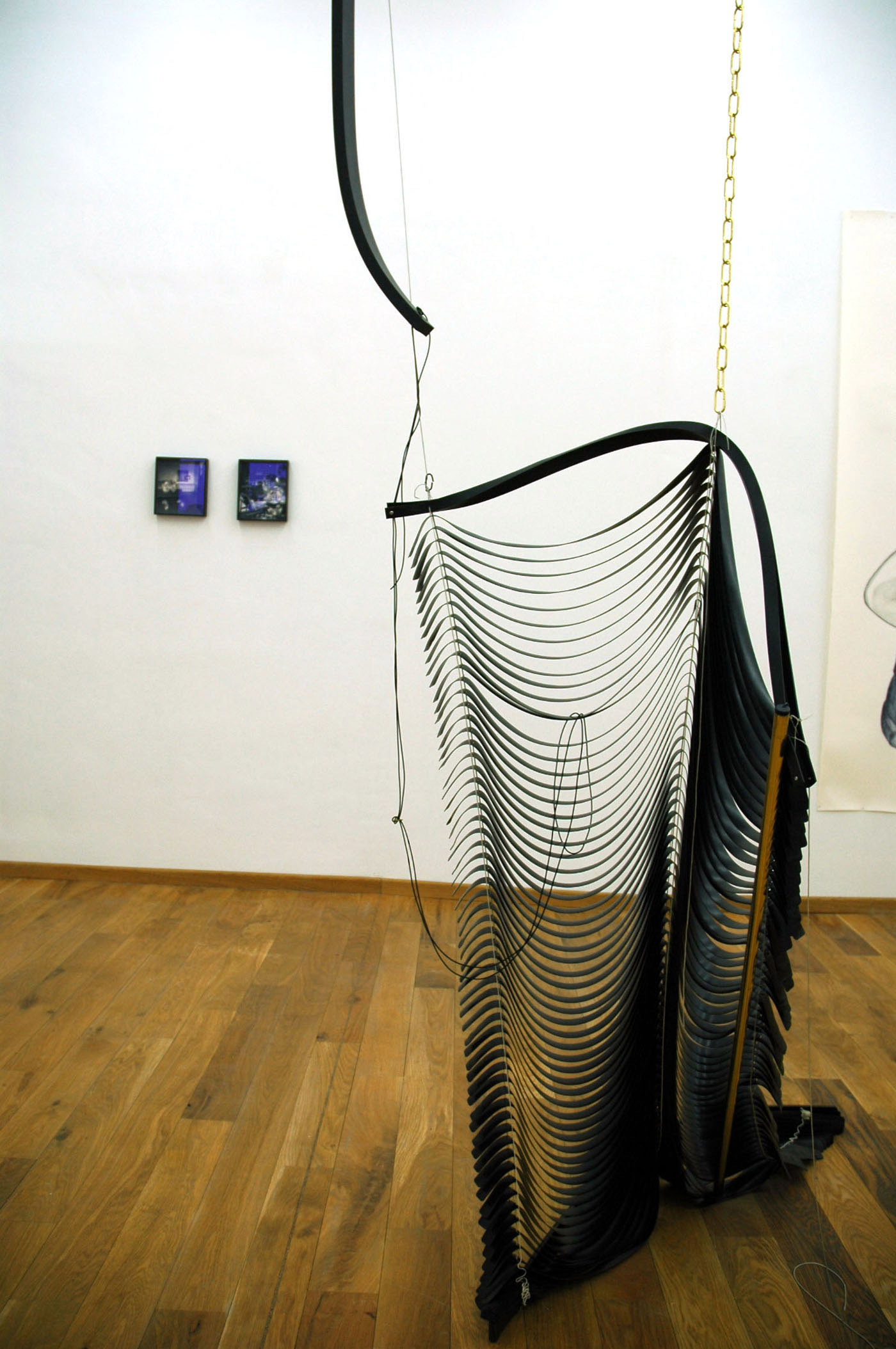 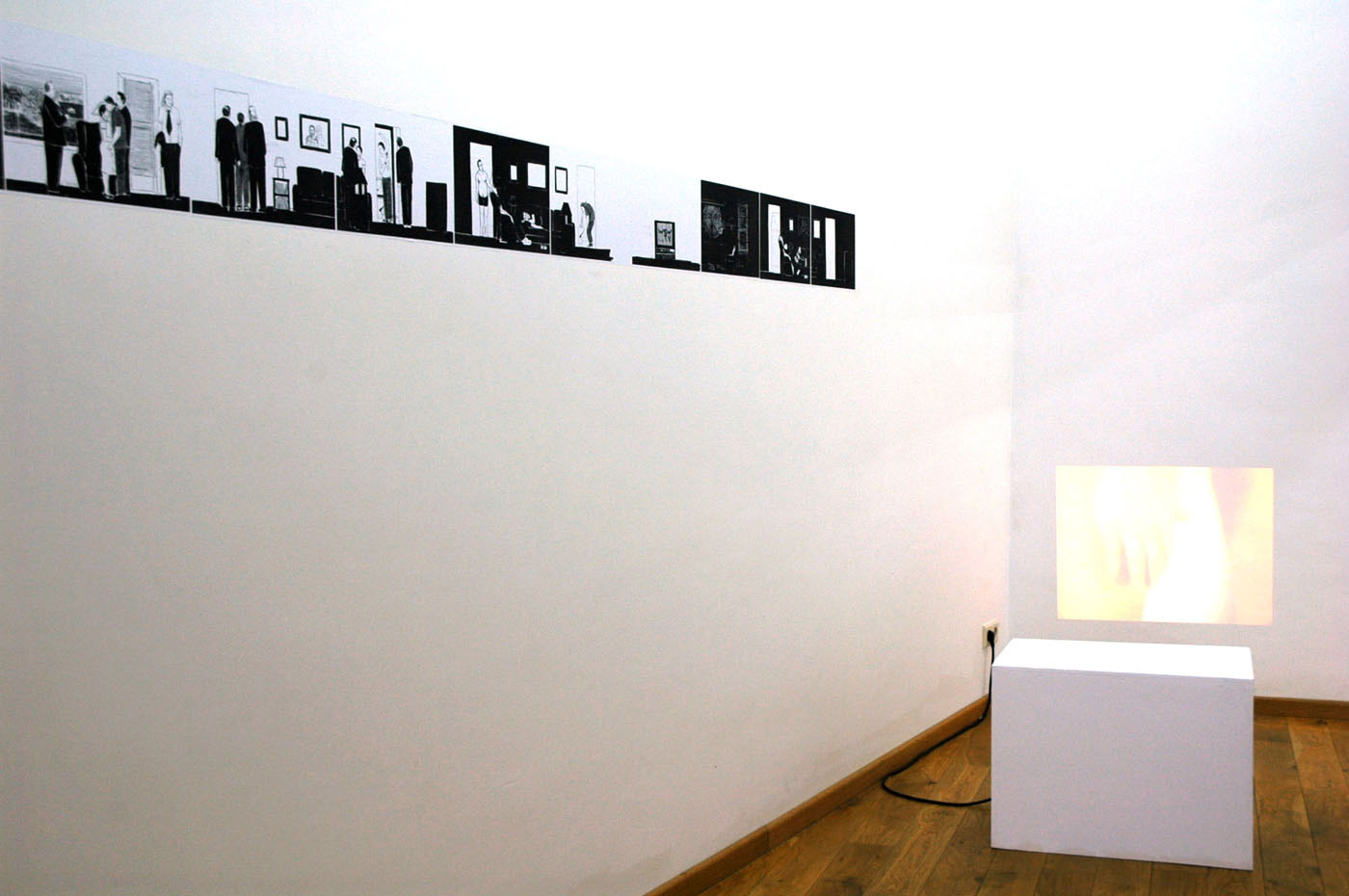 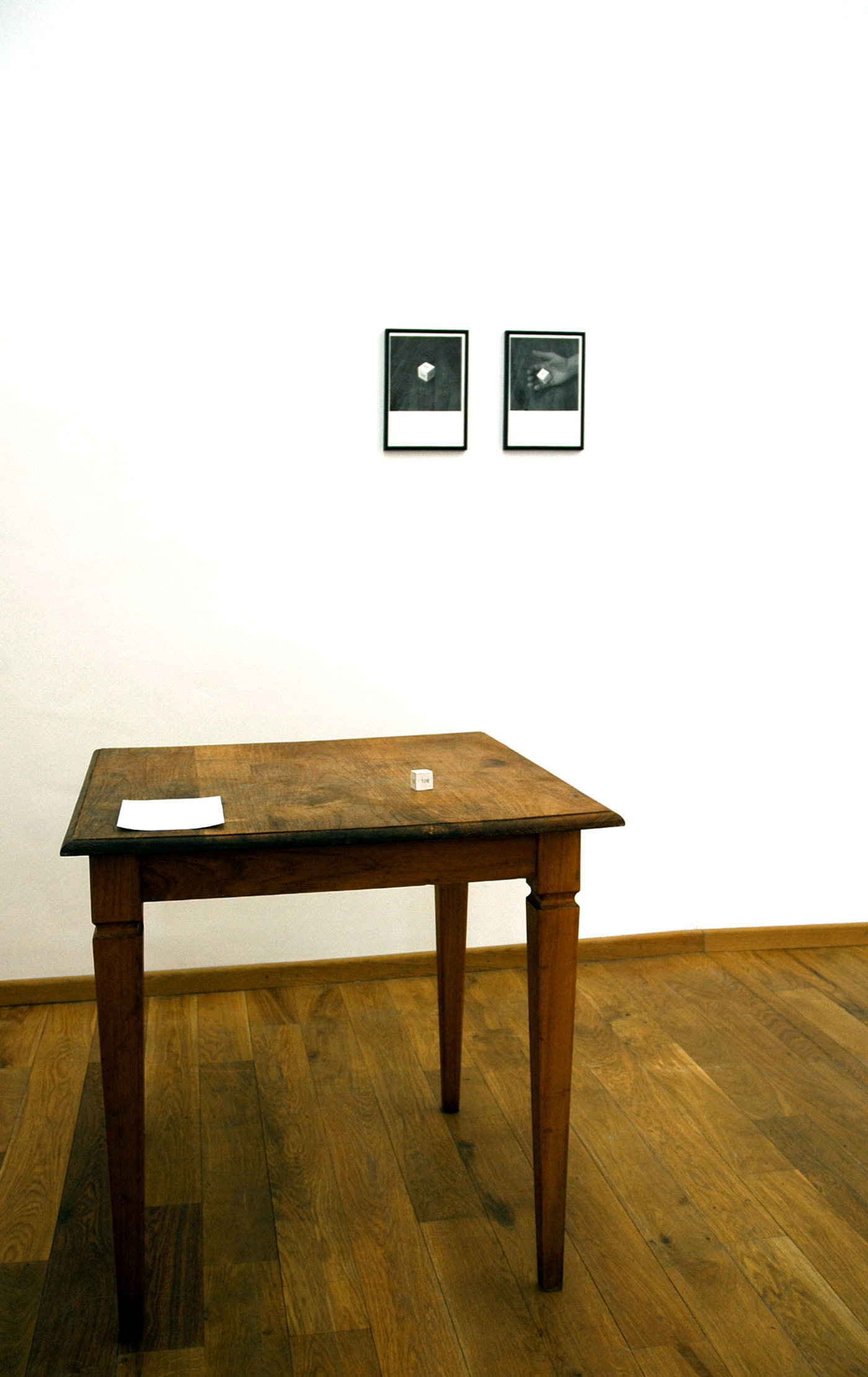 The Pain Game is the title of a work by Croatian artist Mladen Stilinovic (born 1947 in Belgrade) from 1977. The piece consists of a photograph of the palm of a left hand with a white cube on it, which has the word PAIN inscribed on each of its surfaces, and a printed text which reads: “Only one player, the die is cast according to its own rhythm, the game lasts 7 minutes.” The work can be displayed next to a table on which a die, identical to the one in the photograph, has been placed, along with an instruction sheet containing the rules of the game.

Taking this work as an inspiration and a starting point, the exhibition project The Pain Game is exploring the role of pain as a subject and as an image that has been taken and is again taking on in contemporary art production. In the late 1960s and 70s, violence and physical harm against one’s own and the bodies of others (exhibited as videos, photographs and/or performance) were mostly employed as a way to express the perception of the individual’s and its subjectivity’s repression by the state and politics. Today – and this is the initial thesis of this project – the notion of the matter has been extended, and pain is not only a medium of protest and resistance, but also a way of both evoking and provoking feeling and emotion.

Just as an increasing number of many female teenagers today scratch their forearms with razorblades or knives in their inability to express sadness, anger, aggression or rage (but also insecurity, affection or even love) in any other way, the tendency to hurt or attack the other is not only growing amongst young people. The boundaries of one’s own body, as well as the image of the other as an intact physical organism (which actually suffers real damage if intruded – life is indeed NOT a computer game) seem to become virtual, losing the direct connection between emotional and physical components of experience. Artists react to changes and there are a number of artists who express societal discomfort through pain and stress-induced processes.

The Pain Game explores both the continuous political implications and conscious applications of pain and the possibility of a more intuitive usage of the topic on the level of emotions and subjectivity. The show ranges from positions from the 60s to contemporary artistic production and from society as a whole to the private, creating a space full of suspense for the visitor.

Sue de Beer (1973 born in Tarrytown, NY, USA) produced the Trost polaroids in the context of her video installation entitled The Quickening. Set in the oppressive environment of Puritan New England and drawing inspiration from the ecclesiastical texts of contemporary writers, the narrative is seemingly simple: a young woman is stalked, violently attacked, and finally hanged. Layered upon the themes of sins of the flesh (female sexuality) and their punishment, de Beer contrasts Puritanism’s strict control over the members of its society, and its very loss. Trost depicts a young, pregnant woman who has been stabbed into the stomach. Surprisingly, she seems to be in good health, nevertheless, thus blurring the possible reading of the scene as an act of (probably male) violence against female self-determination.

In her often nearly life-size pencil and ball-pen drawings, Marlene McCarty (born 1957) investigates the underlying structures of power and control, as well as of violence and perverted love within families and comparable social contexts. Always starting from an already happened tragedy caused by the collapse of interpersonal relationships and resulting in dead bodies, McCarty makes suppressed or unrealized sexual desires in family configurations and the consequences of religious fanaticism in her images visible and accompanies them by explanatory texts. SUESAN MARLINE KNORR - July 17, 1984, SHEILA GAY SANDERS - June 21, 1985, 1816 Auburn Blvd., Sacramento, California, 1995-97 analyzes the escalation in the mother-daughter-relations of a Californian family, in which violence early on had become the only means of dealing with each other.

Michael Müller’s (born 1970 in Ingelheim, Germany) six-part work Schmerz (Auslöschen/Übertragen) [Pain (Erase/Transmit)] comes from a text that he wrote several years ago, in which he deals with the themes of loneliness, suffering and death. Referring to the cultural context of the buddhistically coined Tibet, in which dying is understood as part of the eternal cycle of life, Müller commissioned a Tibetian translation of this text. As pain and death don't have a similarly anxious connotation like in Western cultures, this process of transference also is one of non-understanding. Translating the text to its original language again, therefore brings with it a remarkable shift of its contents. Two drawings of a branch of a willow catkin - from which the active component for aspirin is extracted - and an image of the stars at a night's sky, which refers to the Western ideas of "heaven" and eternity, complete the cycle.

Francesc Ruiz (born 1971 in Barcelona) uses the métier of the comic to report incidents from his personal life, which he transforms into examinations of the mode of operation of the world around us. In WARSAW, IN Summer 2000, he reprocesses the witnessed murder of the father of his former boyfriend while jointly visiting the family in a rural area in the USA. Being accidentally present at a tragedy, Ruiz remains a helpless observer of the scene who nevertheless becomes involved in the necessity of each family member to get hold of the situation and deal with the loss, pain and mourning that it brings with it. Oscillating between comforter and spectator, Ruiz used his creative possibilities to master the situation and thus makes it accessible to a public.

Made during the ‘Prospekt ‘74’ exhibition at Kölnischer Kunstverein in Cologne, the video performance Sorry, Mister by the German artist Ulrike Rosenbach (born 1943 in Germany) consists of one single, repetitive action. To the rhythm of Brenda Lee’s pop song “Sorry, Mister,” she repeatedly beats her own inner thigh with her right hand, until a dark red hematoma appears on her skin. Lee’s crooning about refused love and leaving a man is painfully enforced by the artist’s constant (auto-) aggressive punches. This video was produced in the context of Rosenbach’s long-term investigation about the images of the woman in the patriarchal and sexist society of the 1970s. The correlation between psychical and physical violation can be interpreted both as the exhibition of the female body as a passive object and as deliberate self-injury as a refusal to fulfil role clichés.

Joep van Liefland (born 1966 in the Netherlands) was long-time best known for his project of the Video Palace, a fully operational video rental store that the Dutch artist has been setting up illegally in abandoned buildings around Berlin over several years. Whether watching Wrestling Super Stars in the VP Test-Corner, enjoying Cannibal Holocaust, the video of the month or listening to the tulles of Burger King Beats – van Liefland’s work derives from collecting the slops of the film industry. While presenting an array of second-rate videos, van Liefland added his homemade brand of "splatter porn" tapes and other kinds of found footage. The video Major meat was shot in a factory for decayed meat, and is not showing much more than the camera’s wandering through piles of leftovers from the meat industry. The meat, though, filmed in black and white, turns into an almost abstract entity, remotely reminding us of human flesh – in the style of von Hagen’s Körperwelten – carrying with it a slight scent of disgust.

Geerten Verheus’ (born 1965 in Amsterdam) sculptural installations and collages mostly function not through any narrative content, but through rather intuitive associations to the unorthodox materials he uses and the interrelations he creates between them. Latex and brass, for example, apparently belong to his favourite resources, from which he created Venice in Fur, an abstract sculpture that alludes to a typical sunblind, only that it is done with the wrong material and hangs in the middle of the exhibition space. Latex commonly is associated with sadomasochistic sex toys and equipment, combined with shiny, polished brass it also transmits a combination of an air of luxury and aggression.

Ellen Blumenstein, born 1976 in Kassel, lives and works in Berlin. She has organised a lot of national and international exhibitions and art projects, among others Zur Vorstellung des Terrors: Die RAF-Ausstellung an den KW ˆ Institute for Contemporary Art (Kunst-Werke), Berlin (2005), Zwischen Zwei Toden im ZKM ˆ Zentrum für Kunst und Medientechnologie in Karlsruhe (2007), The Human Stain - Conceptual Art from the Collections of CGAC at the Centro Galego de Arte Contemporánea in Santiago de Compostela (2009), as well as in different museums and galeries throughout Europe, South America and USA.