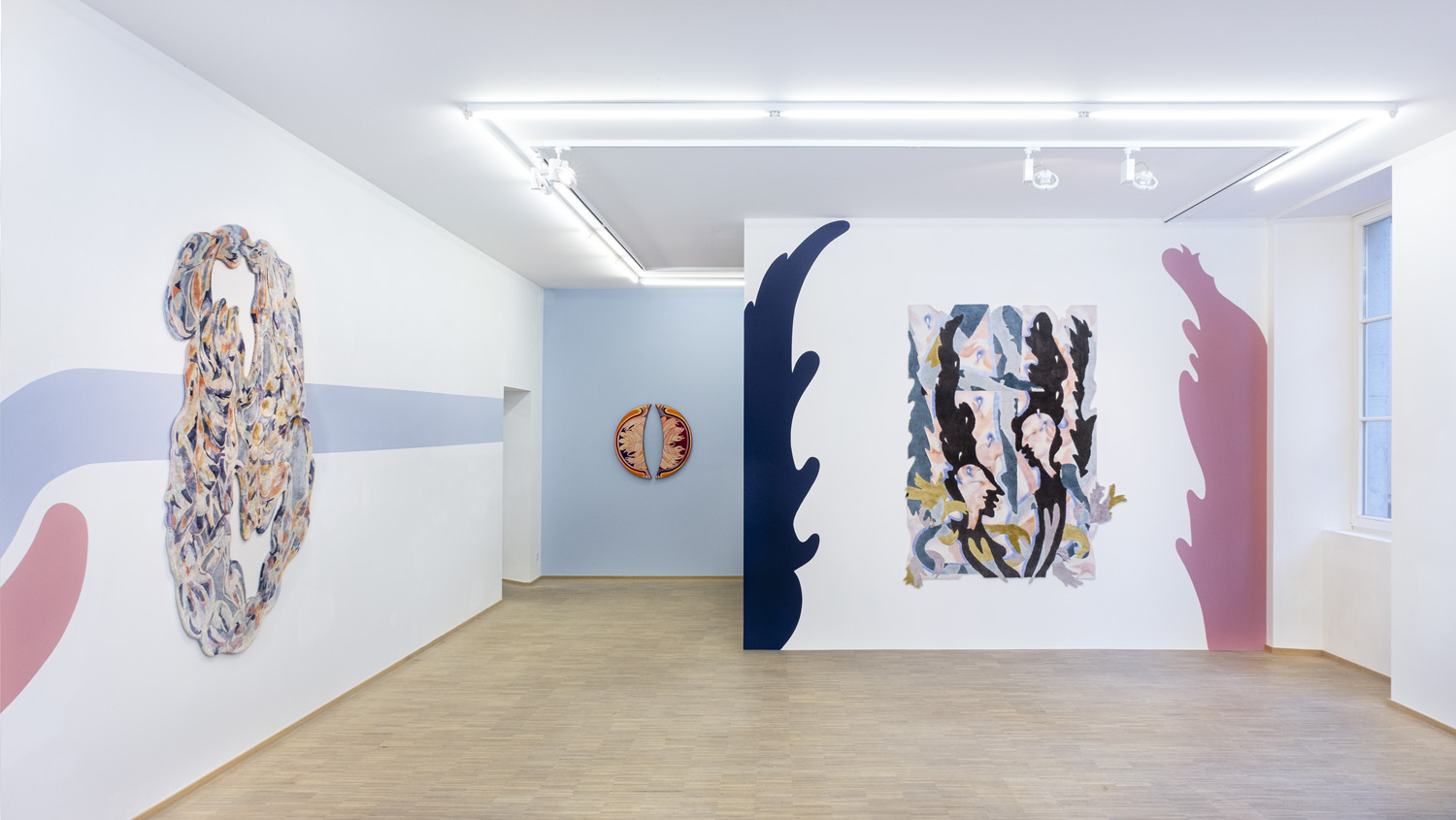 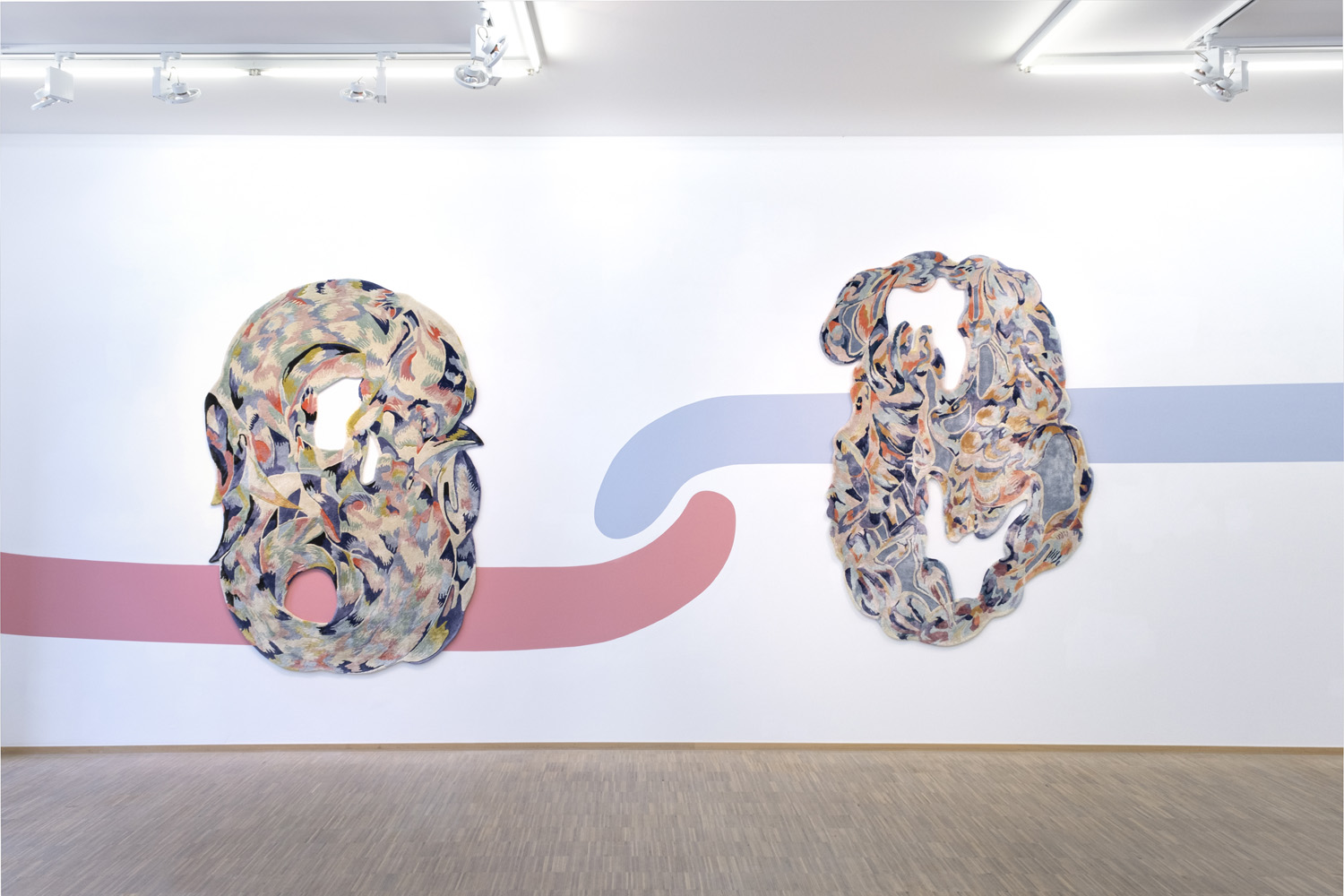 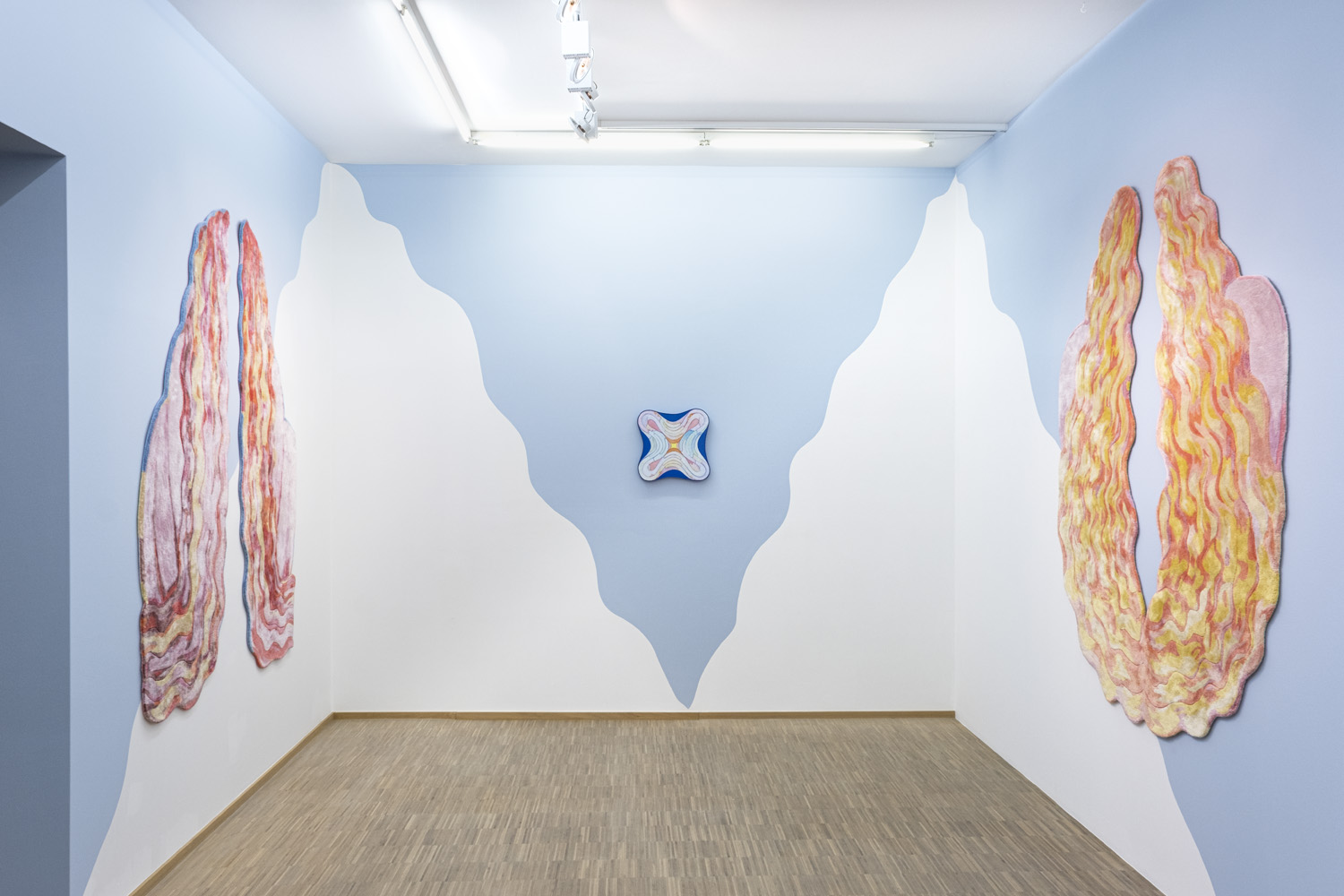 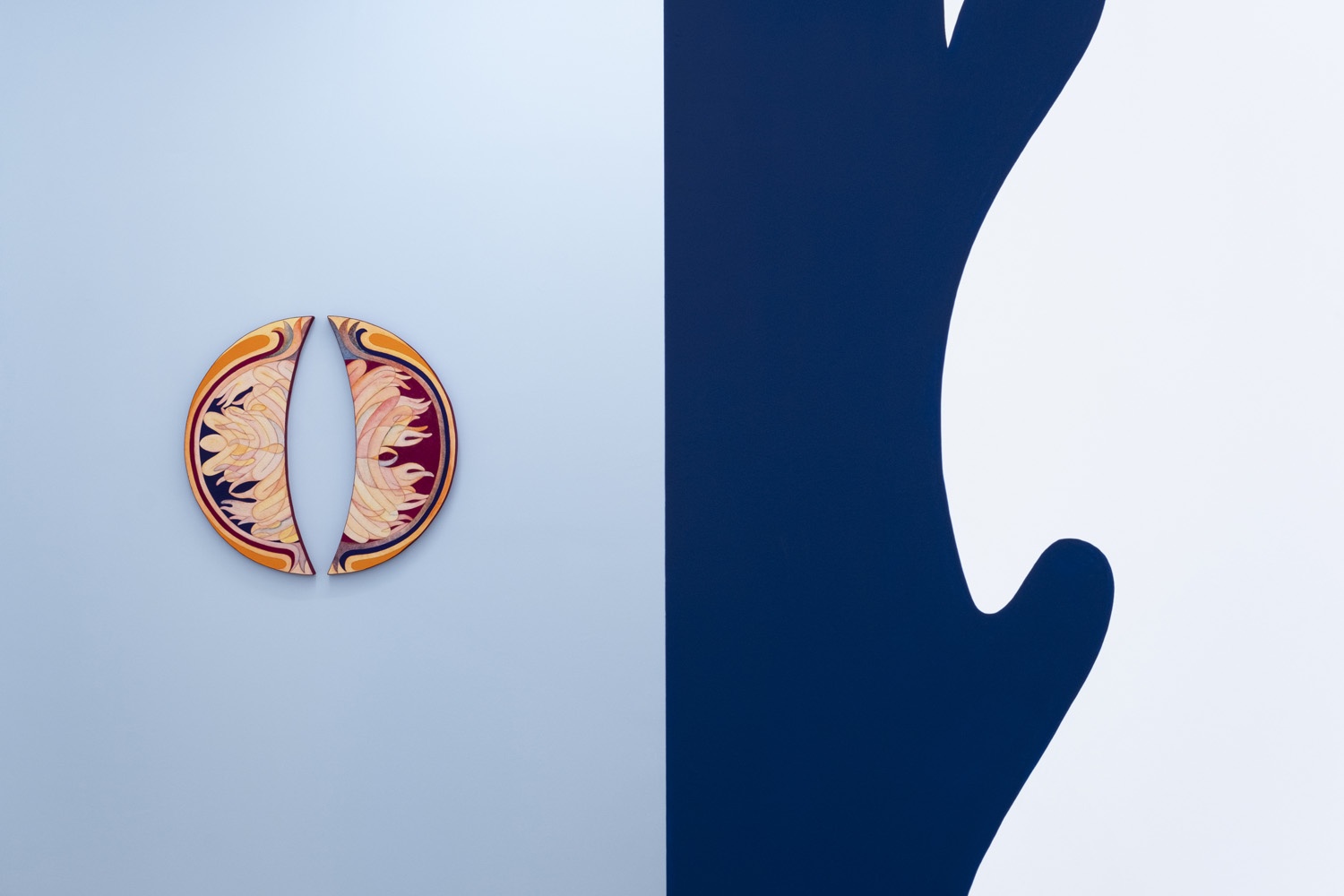 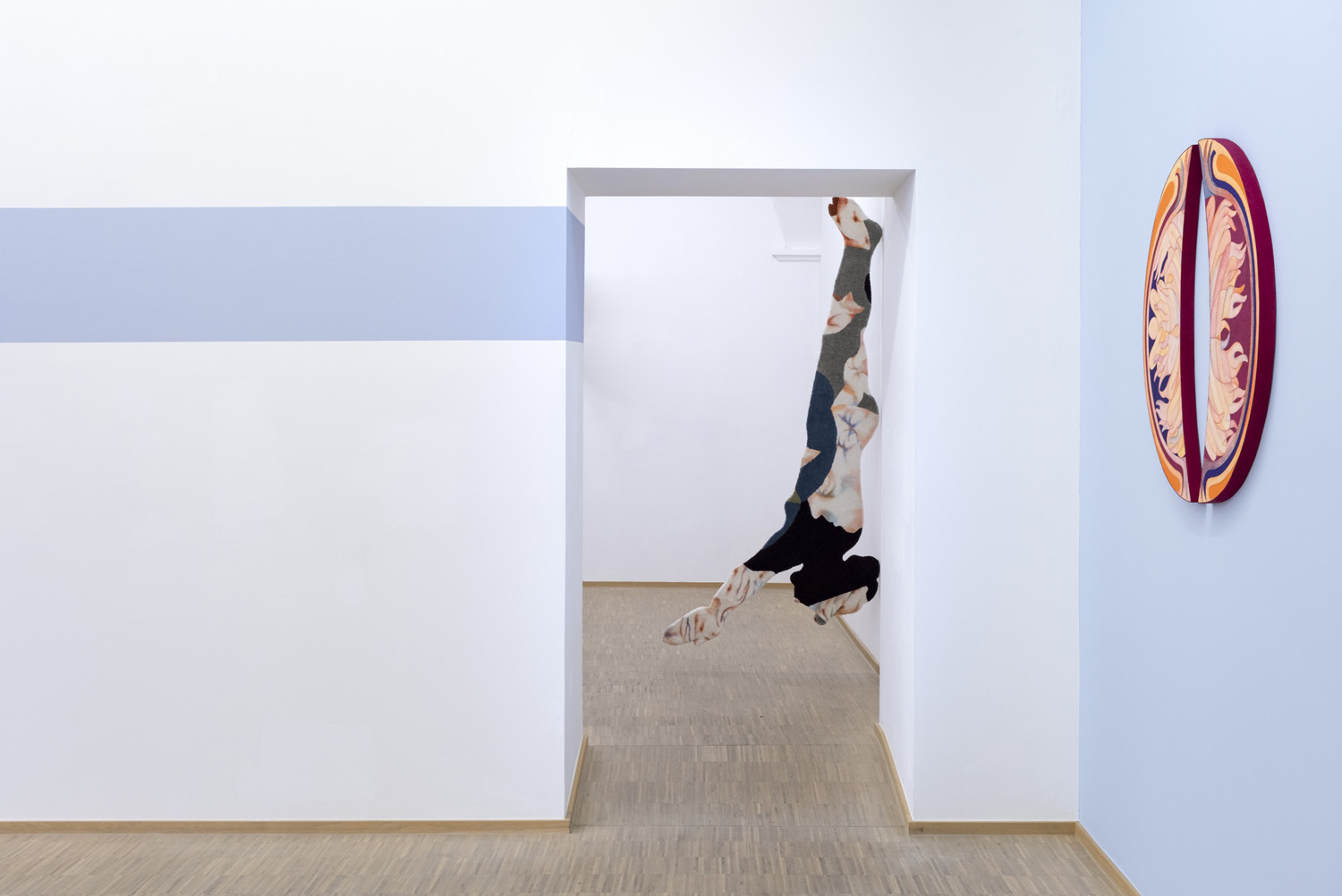 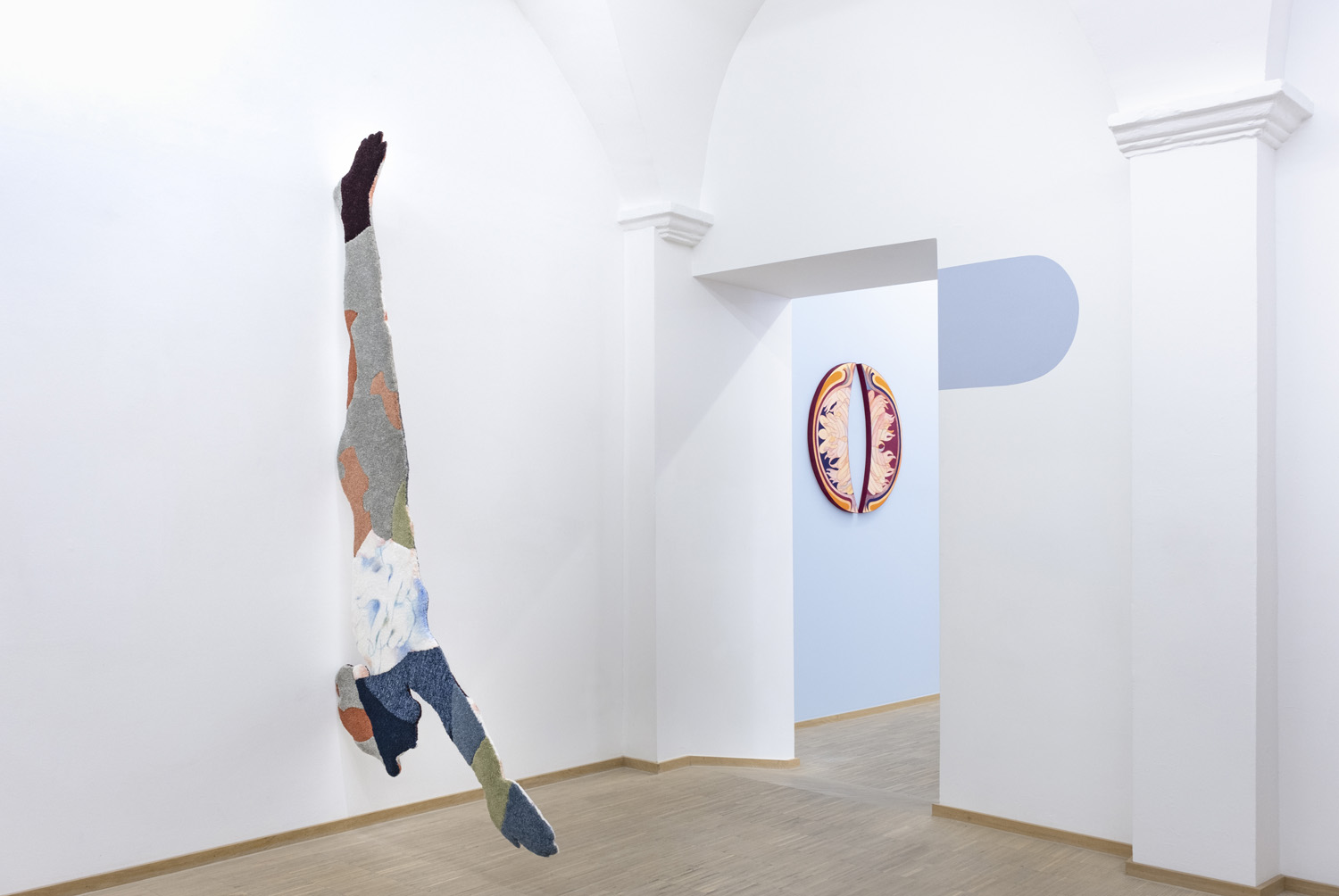 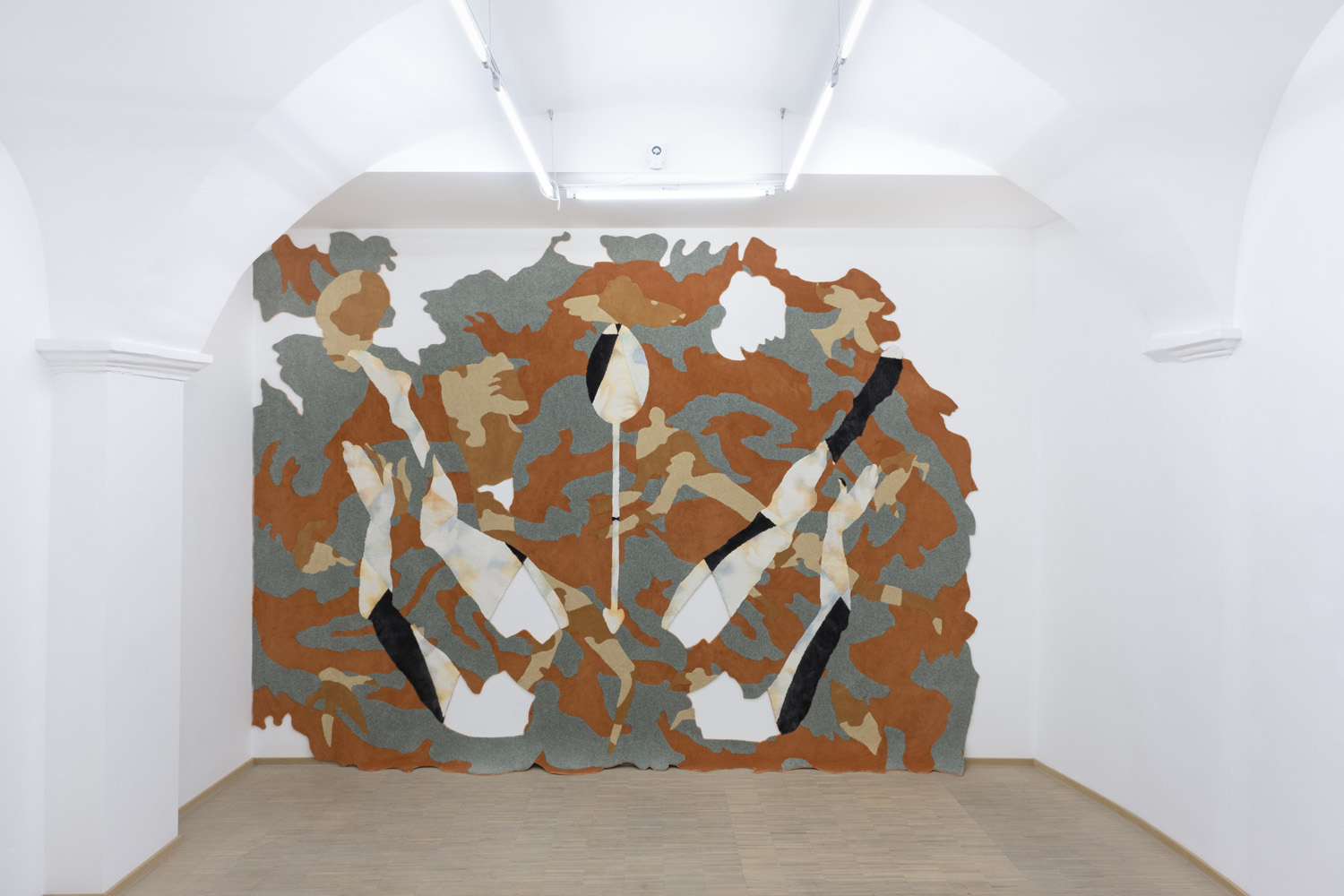 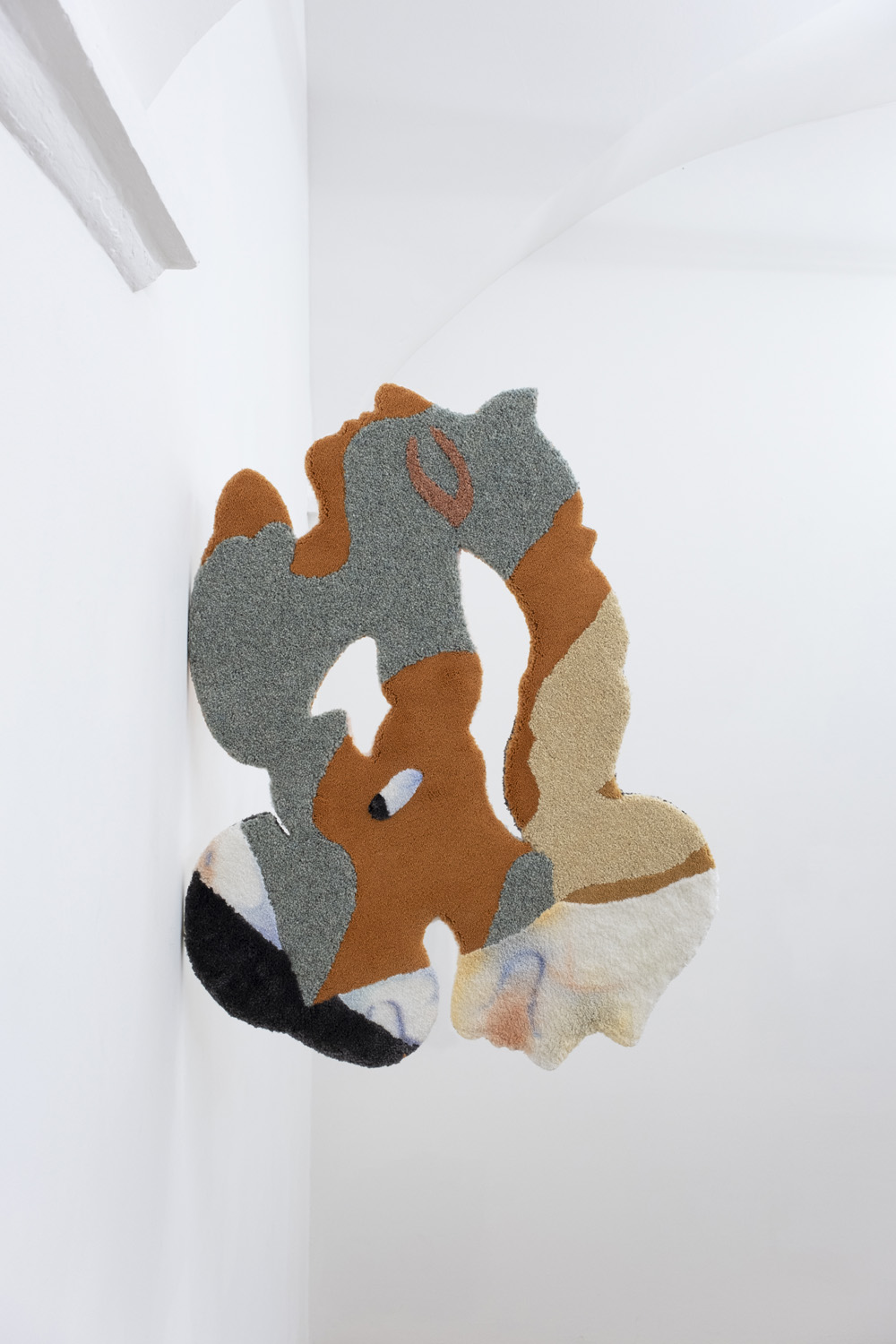 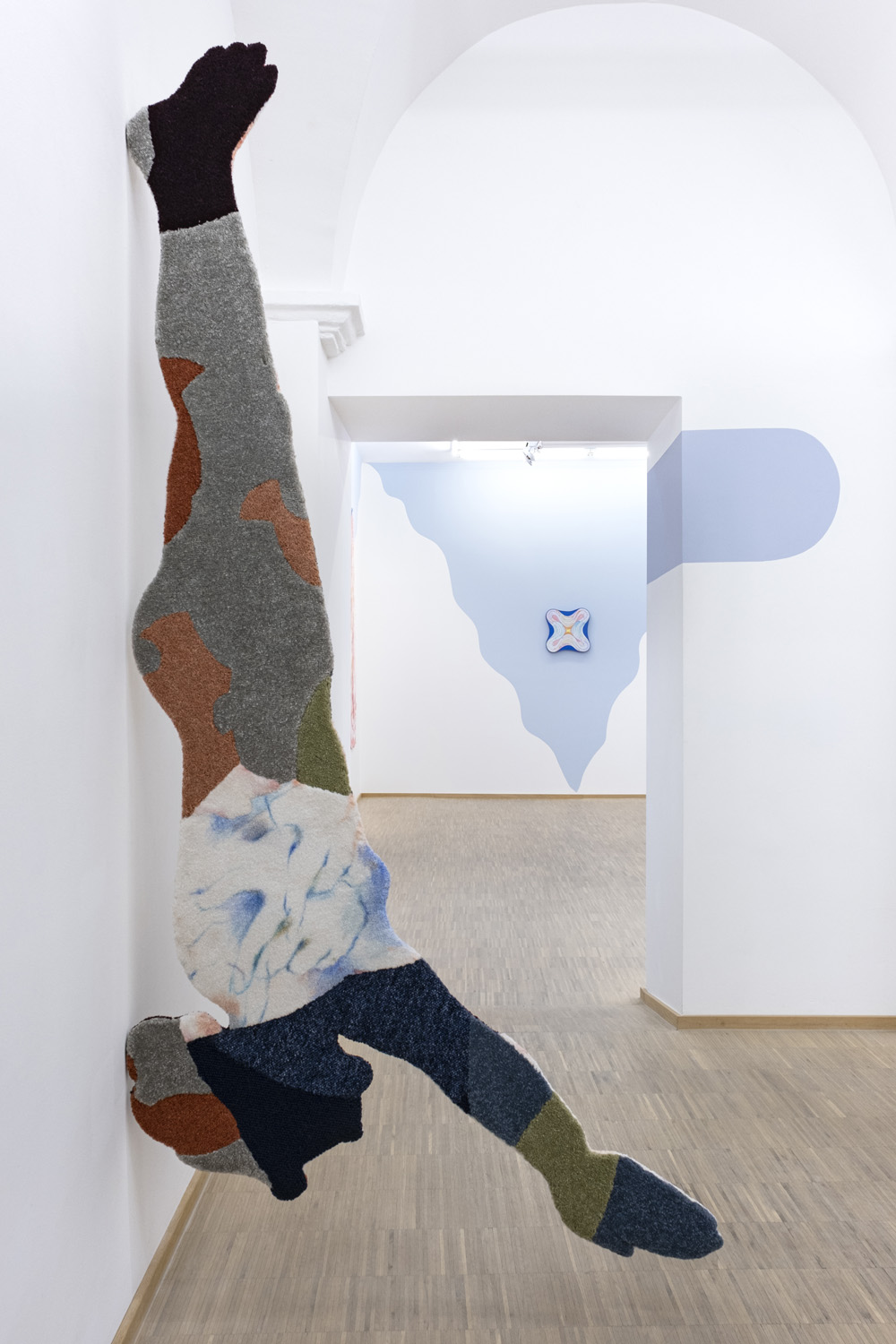 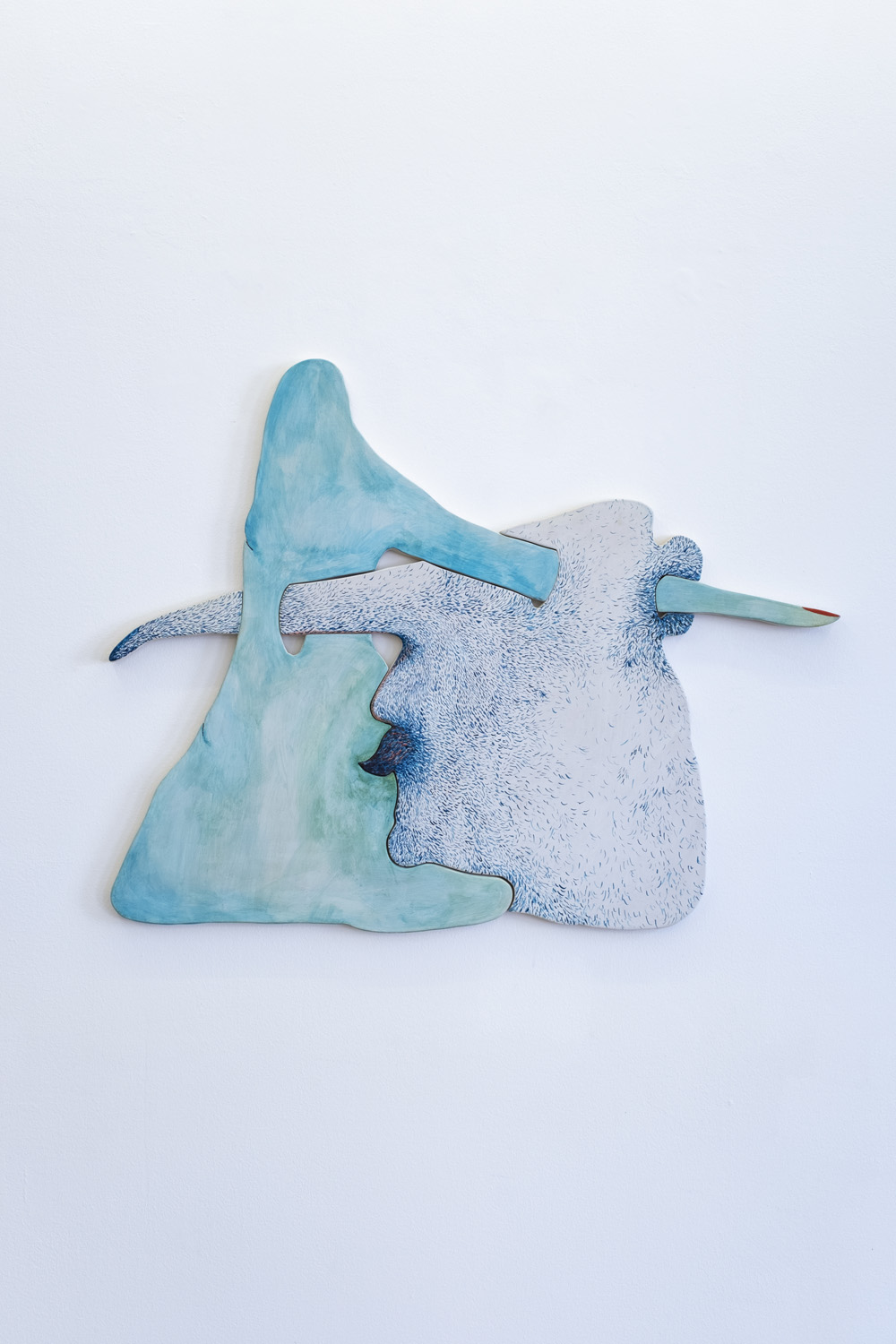 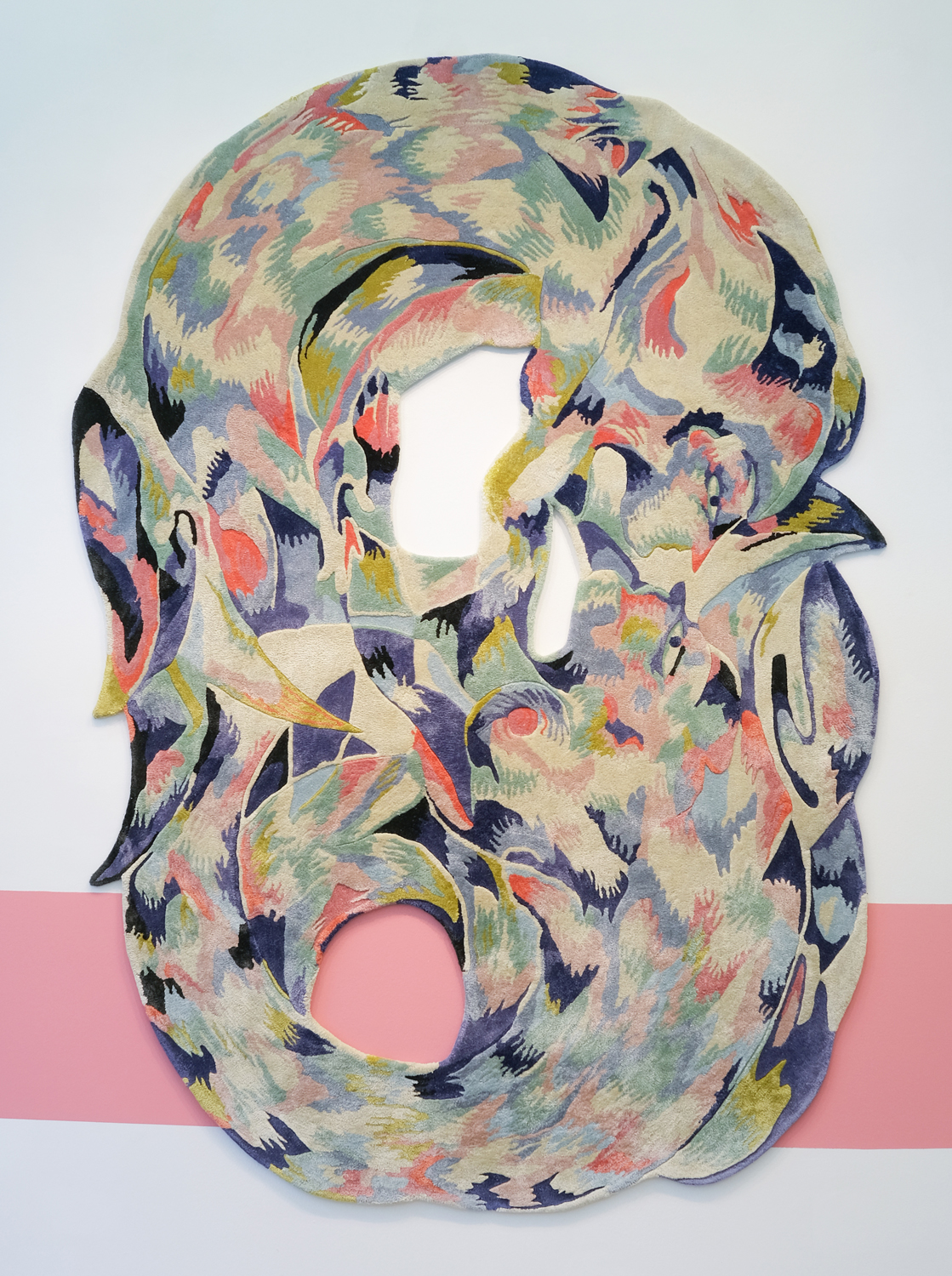 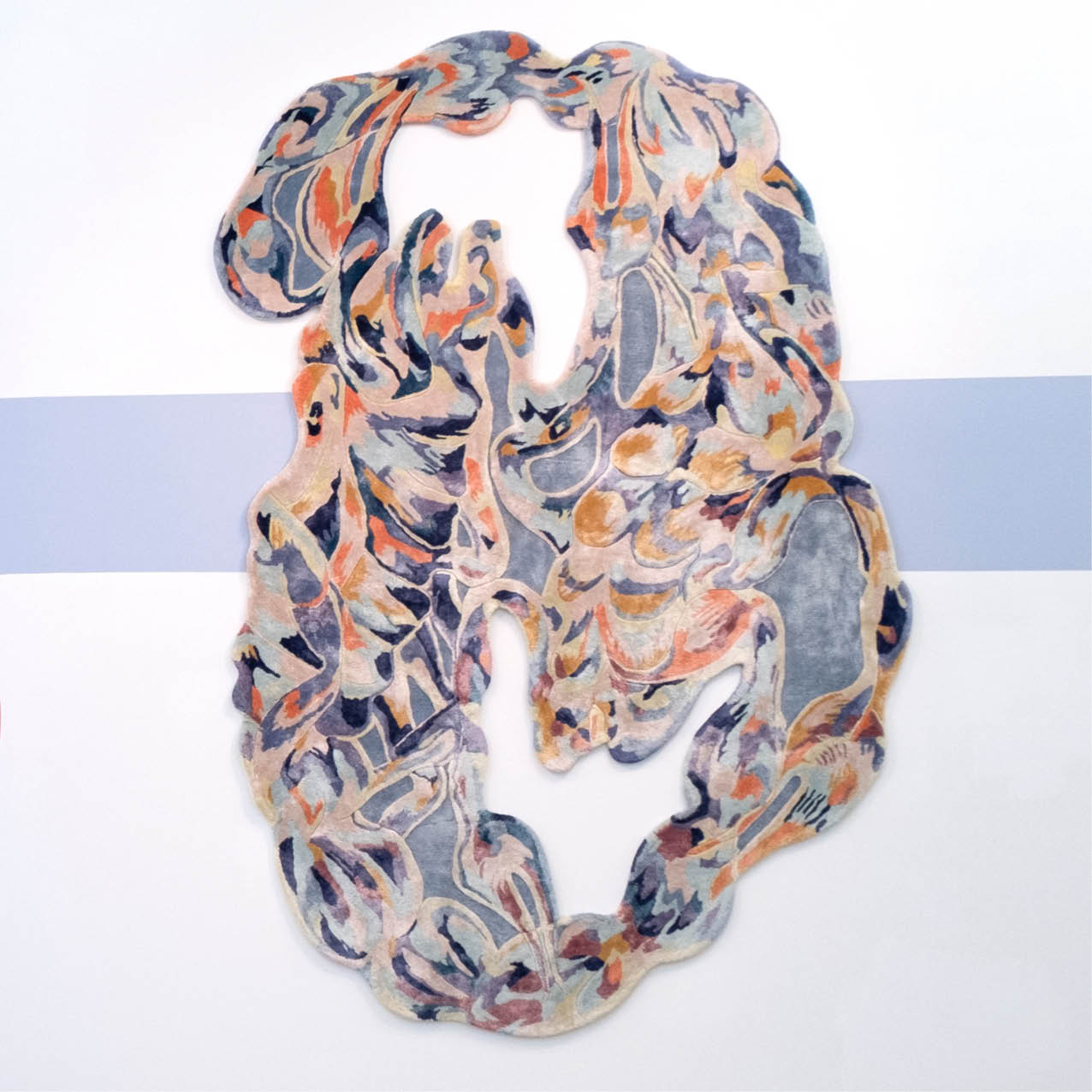 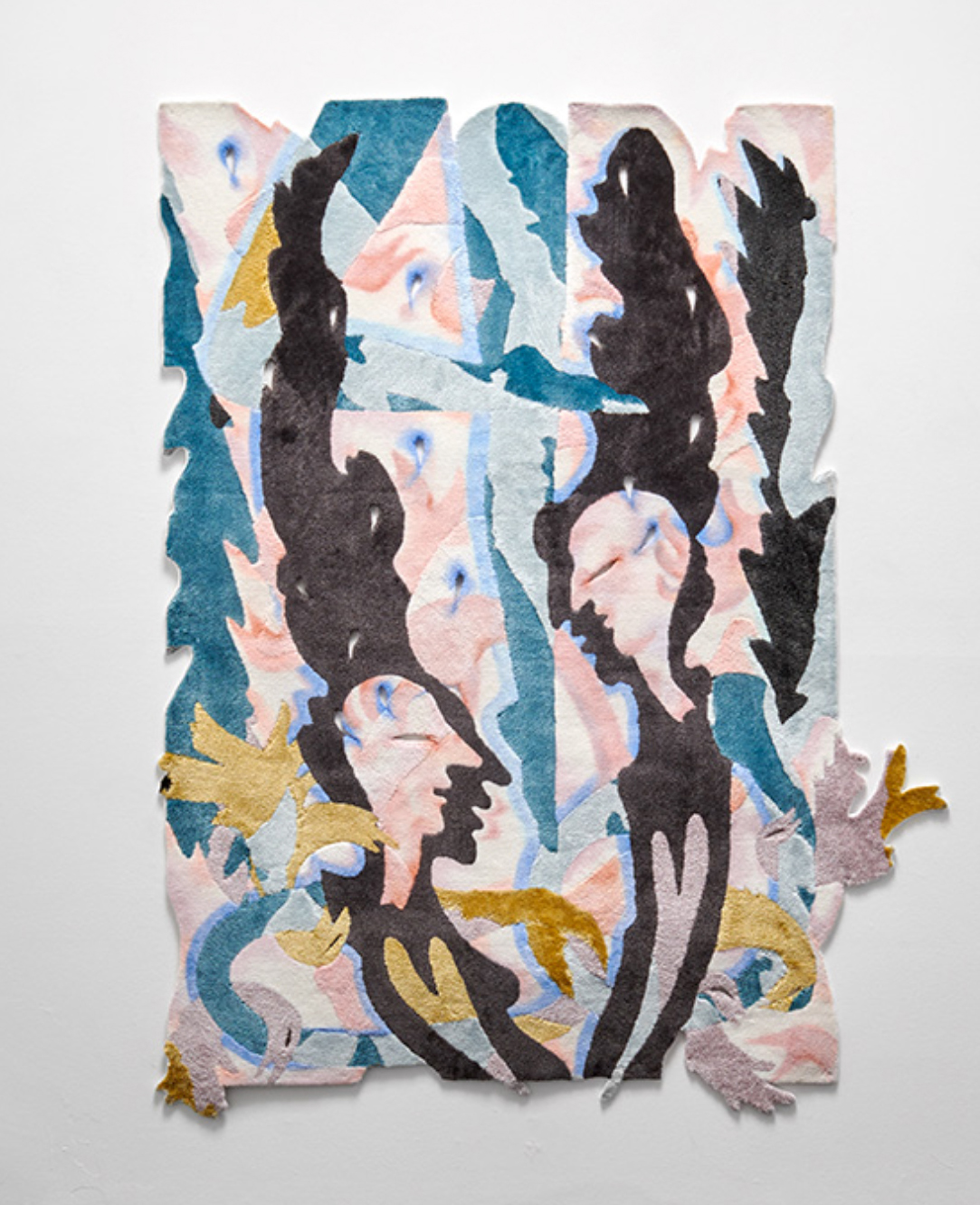 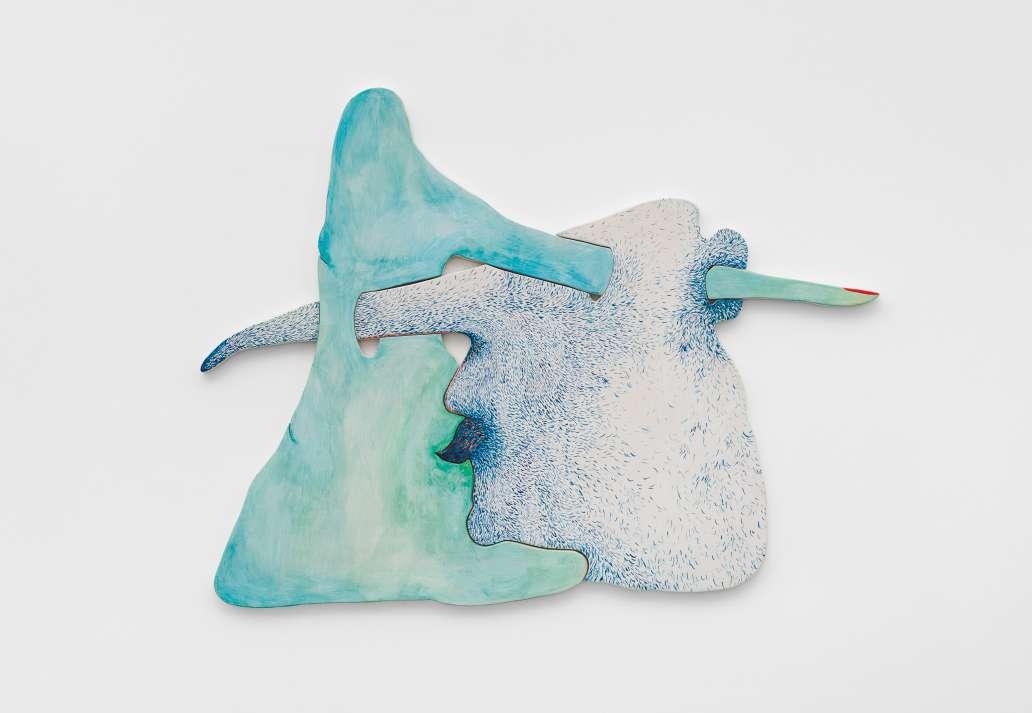 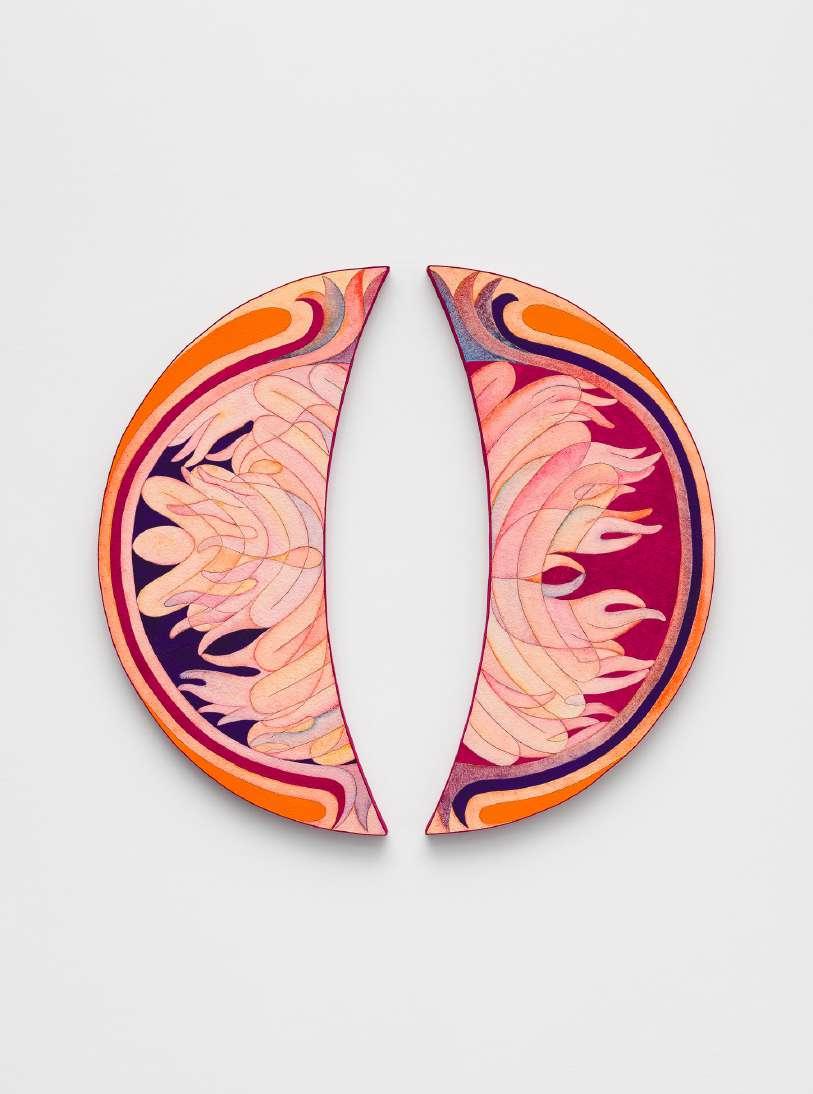 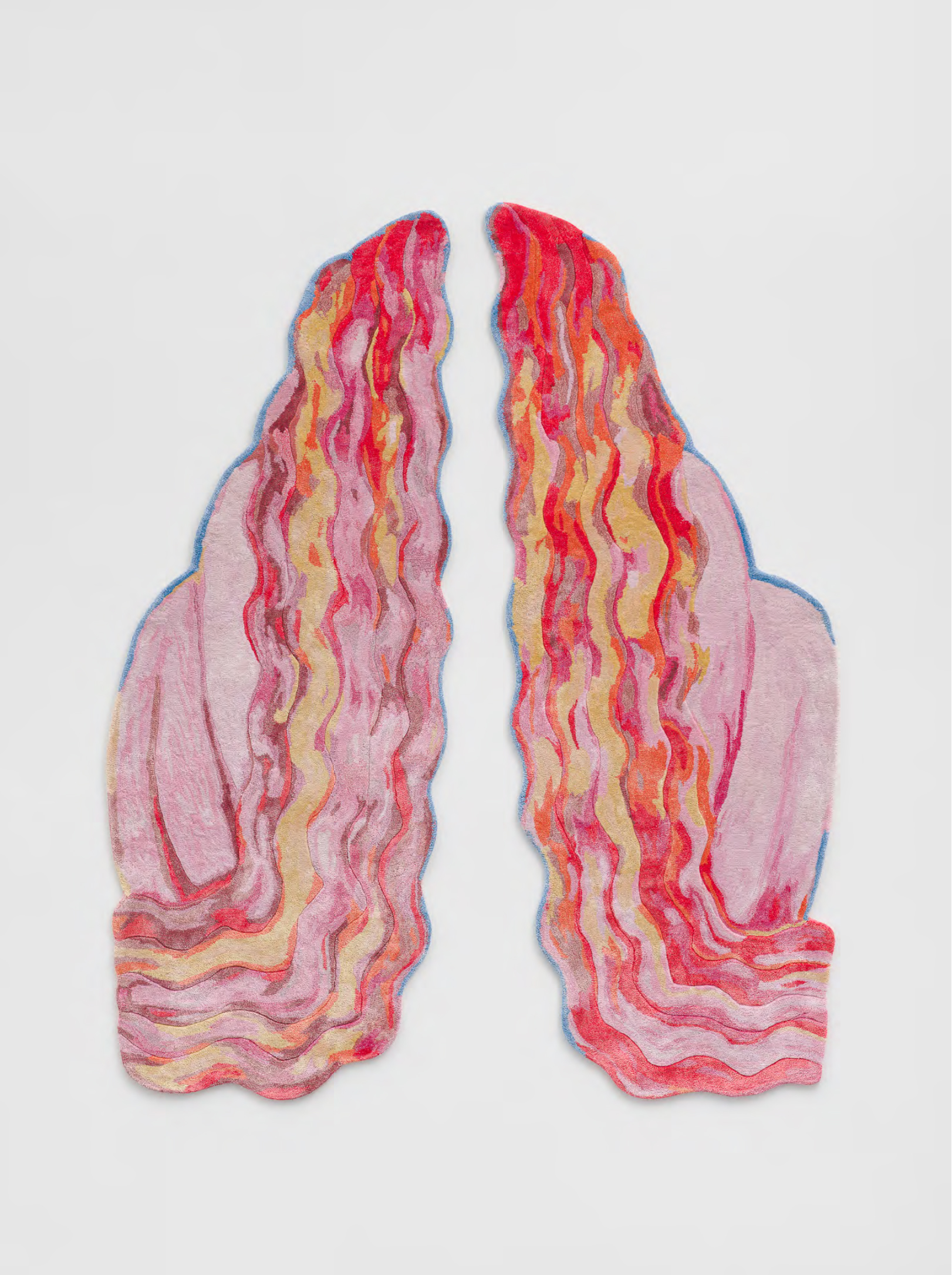 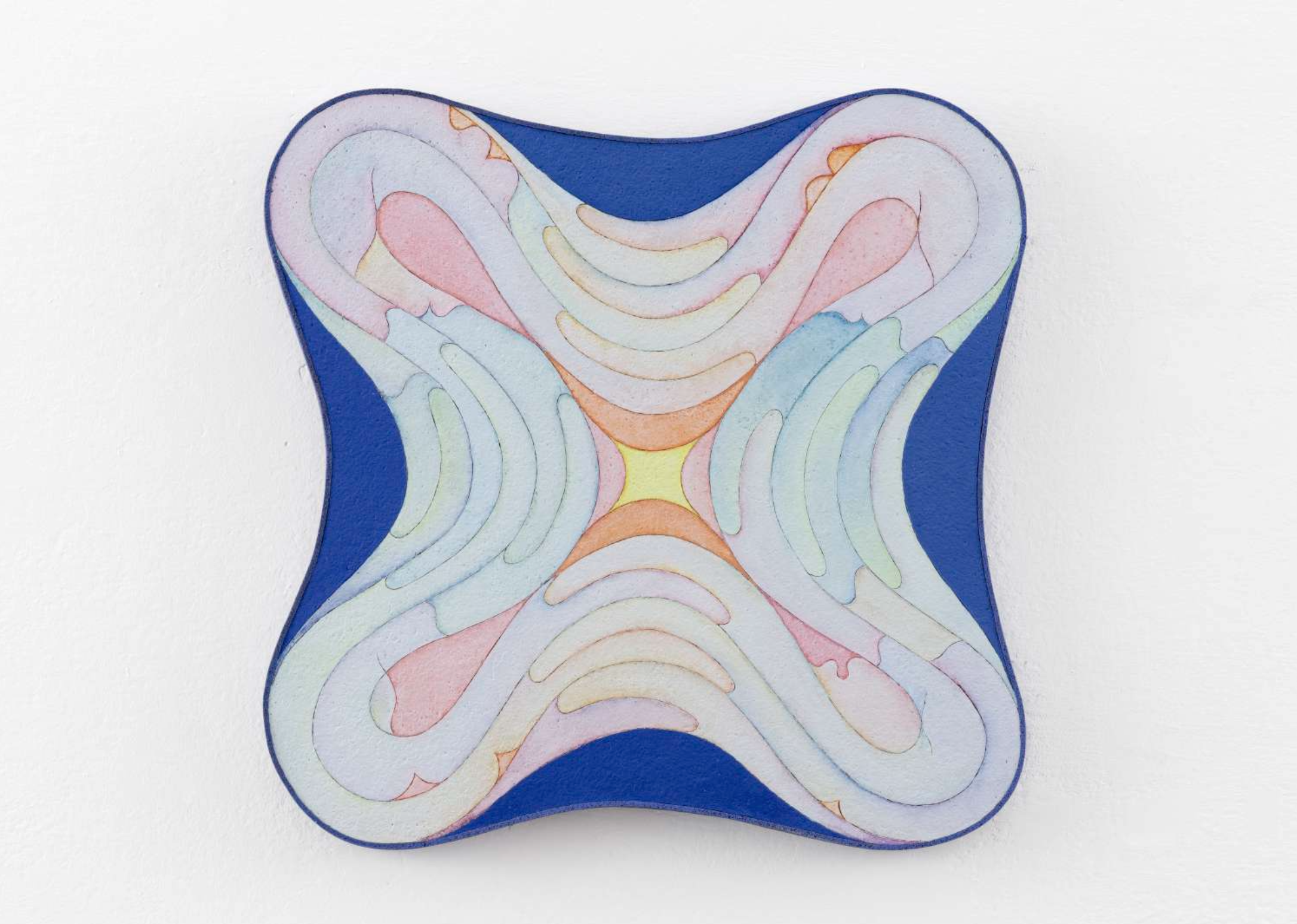 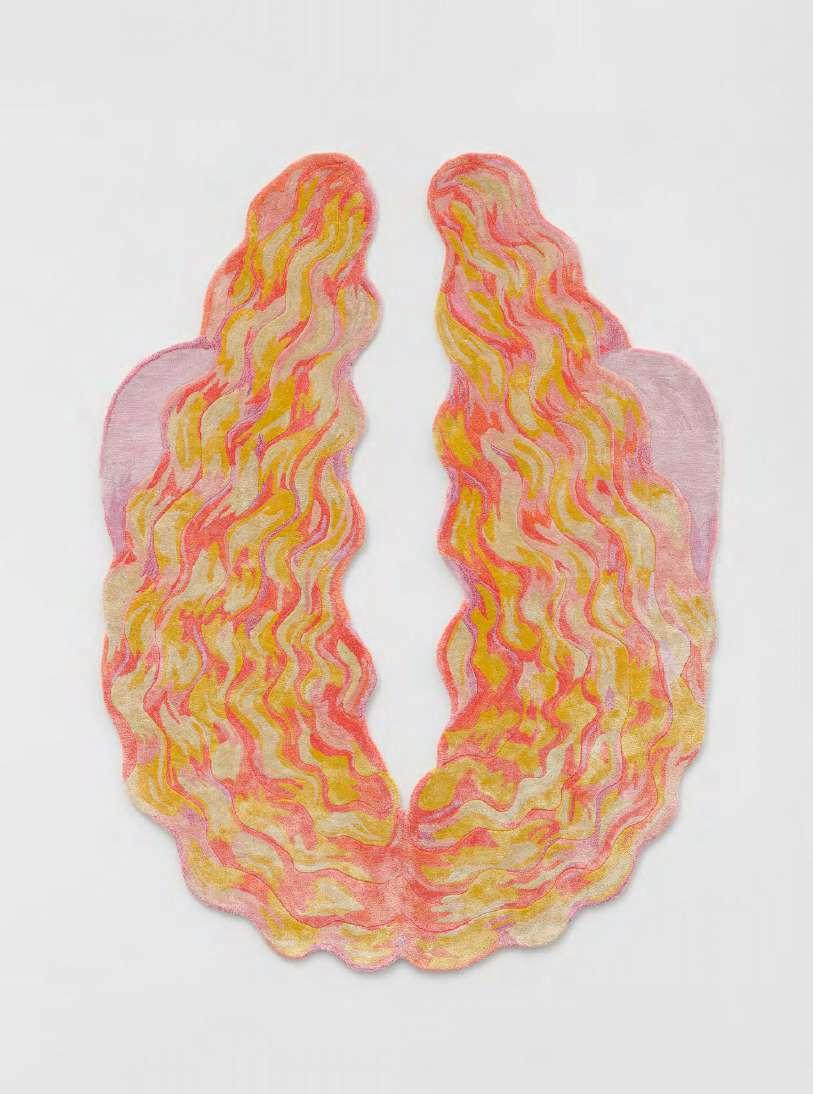 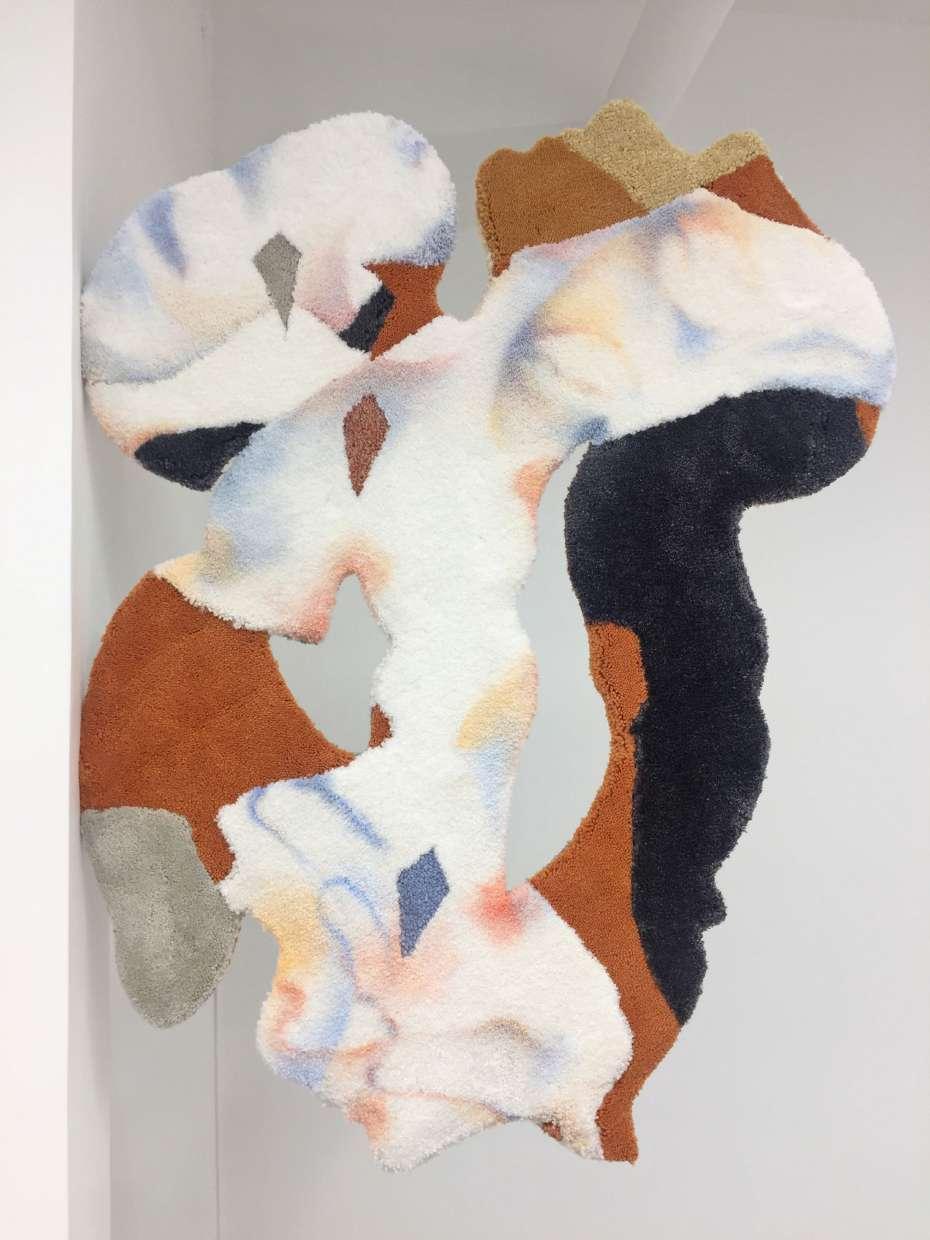 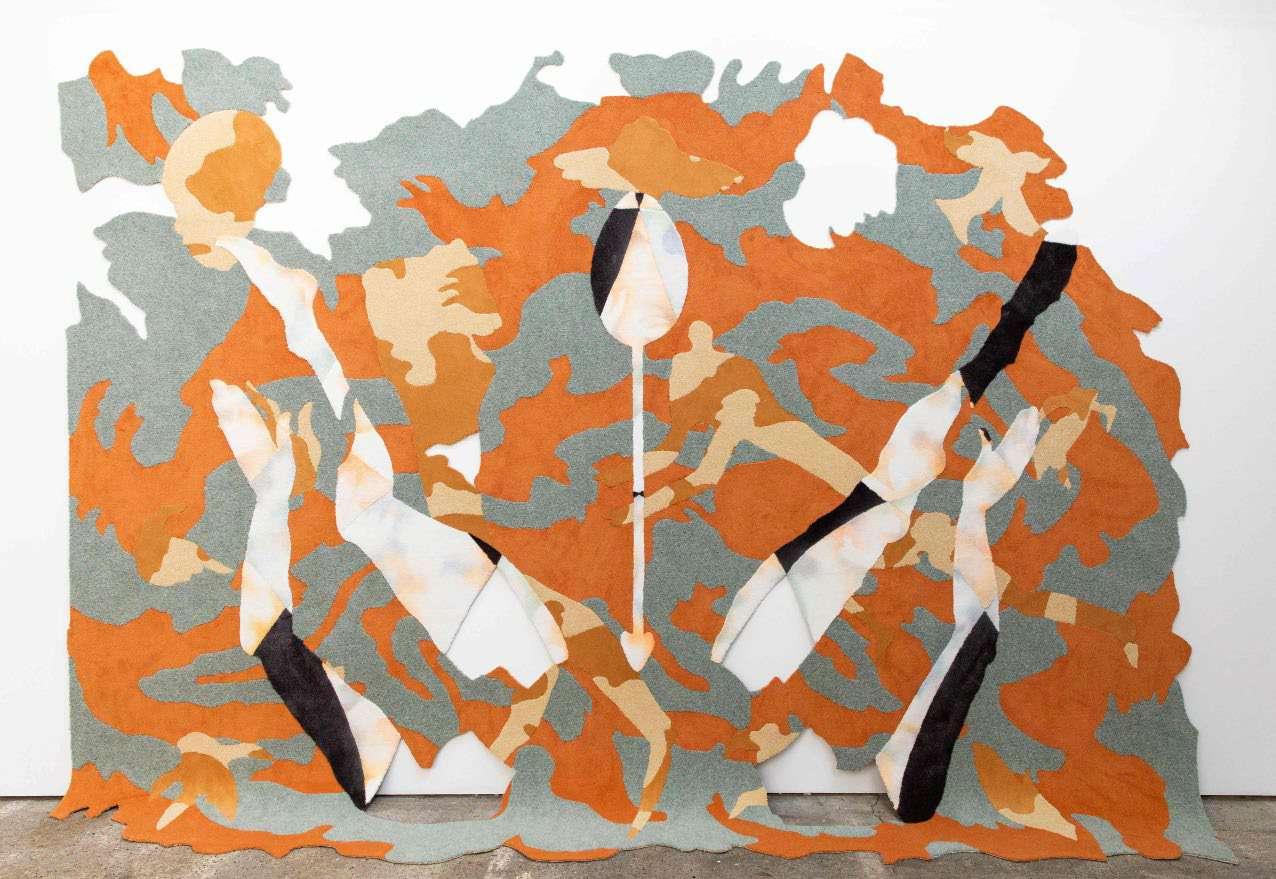 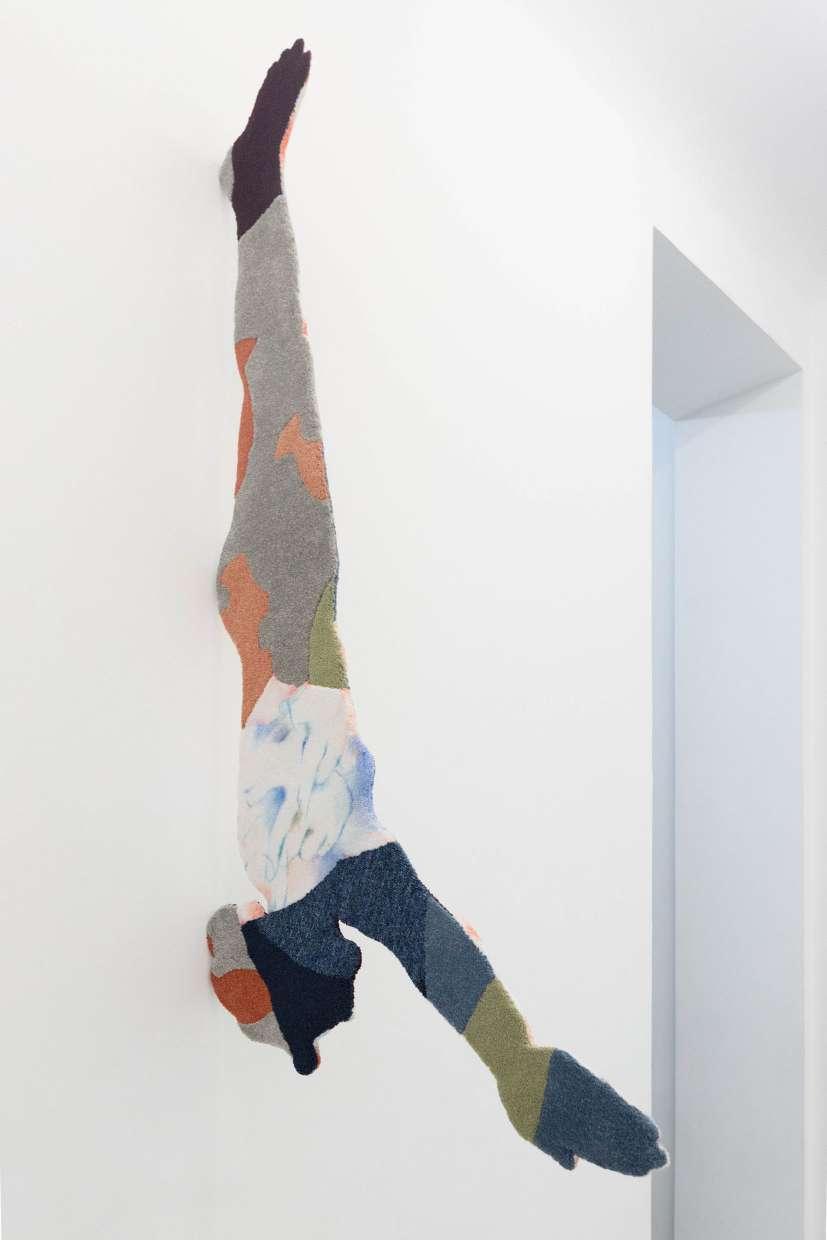 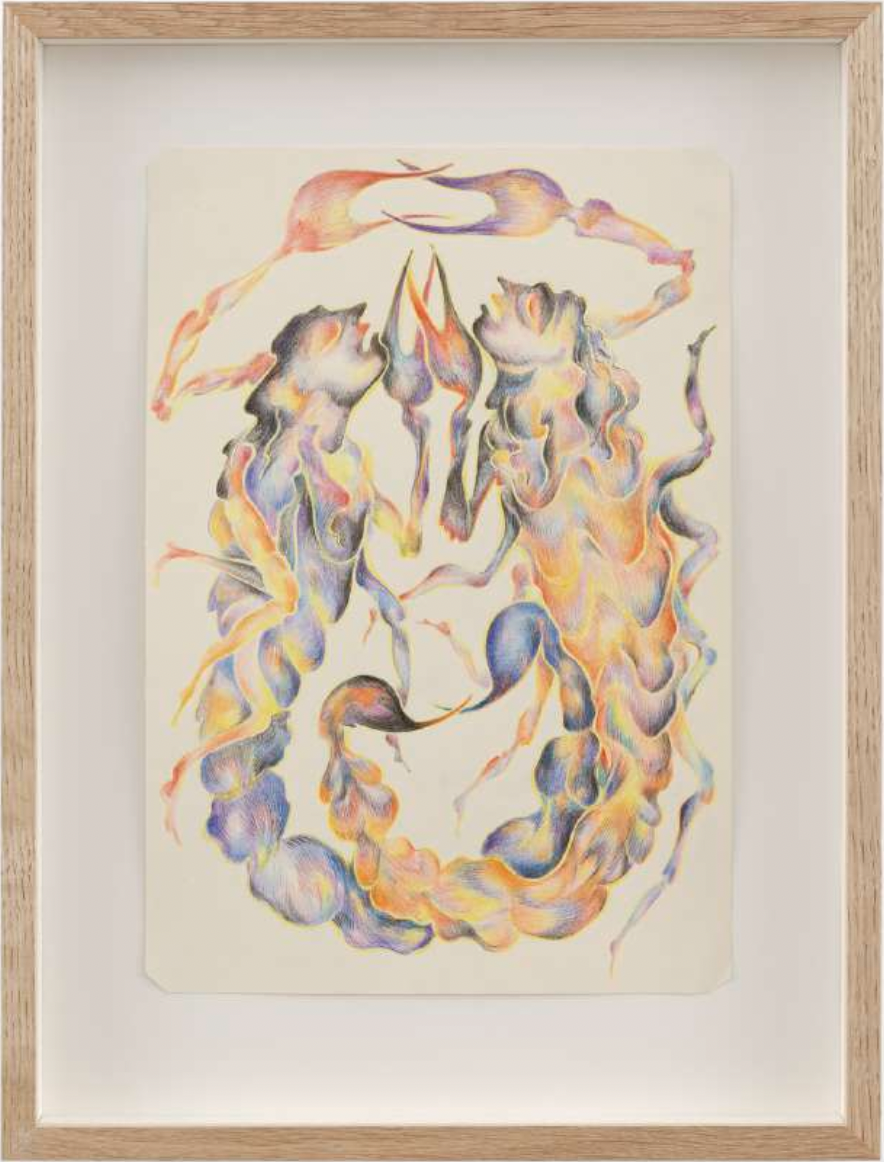 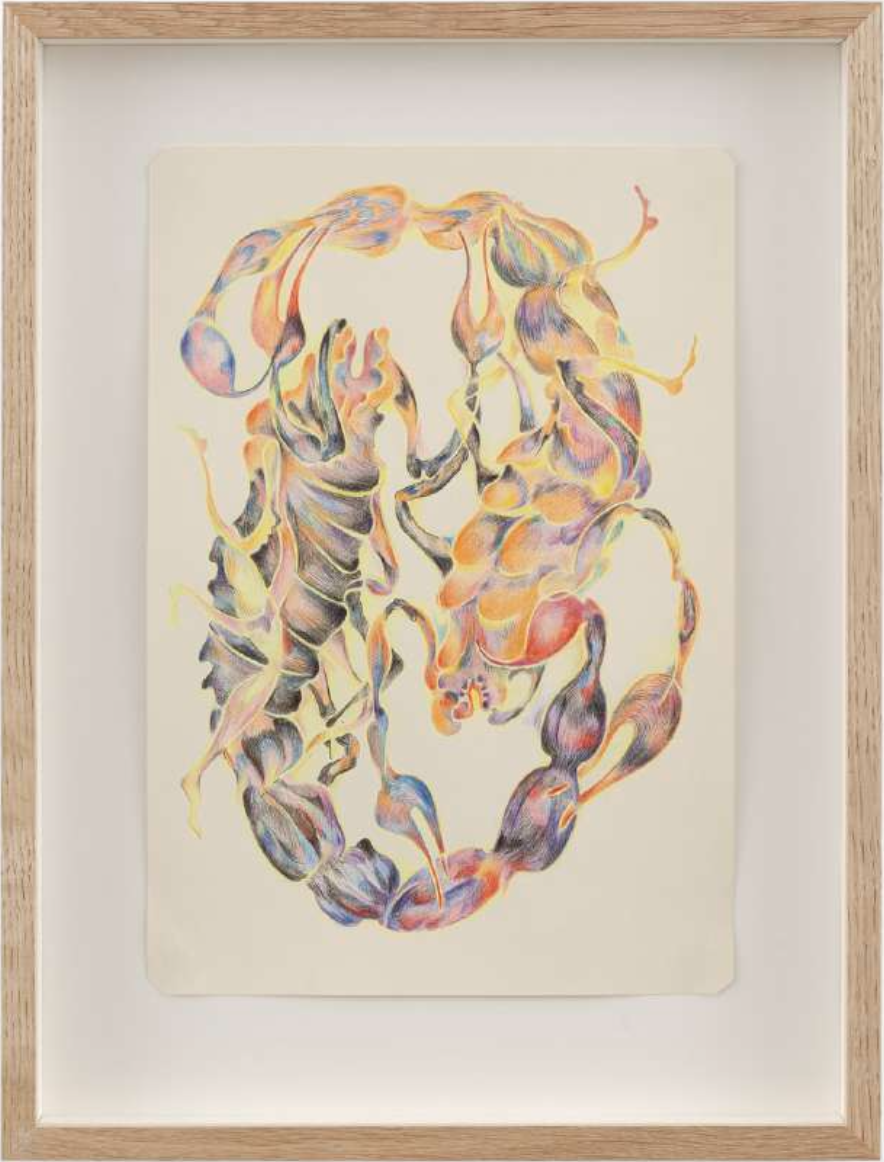 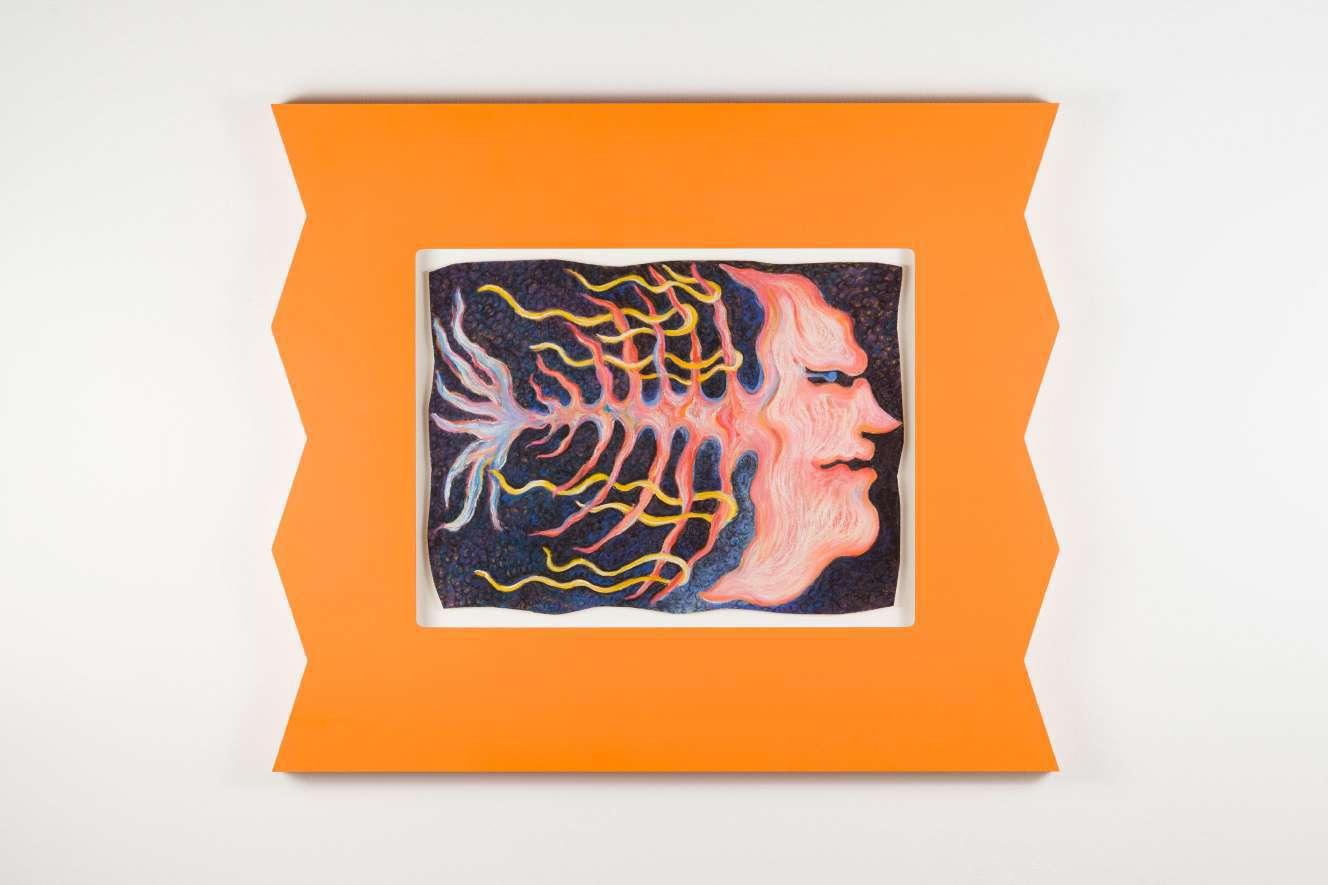 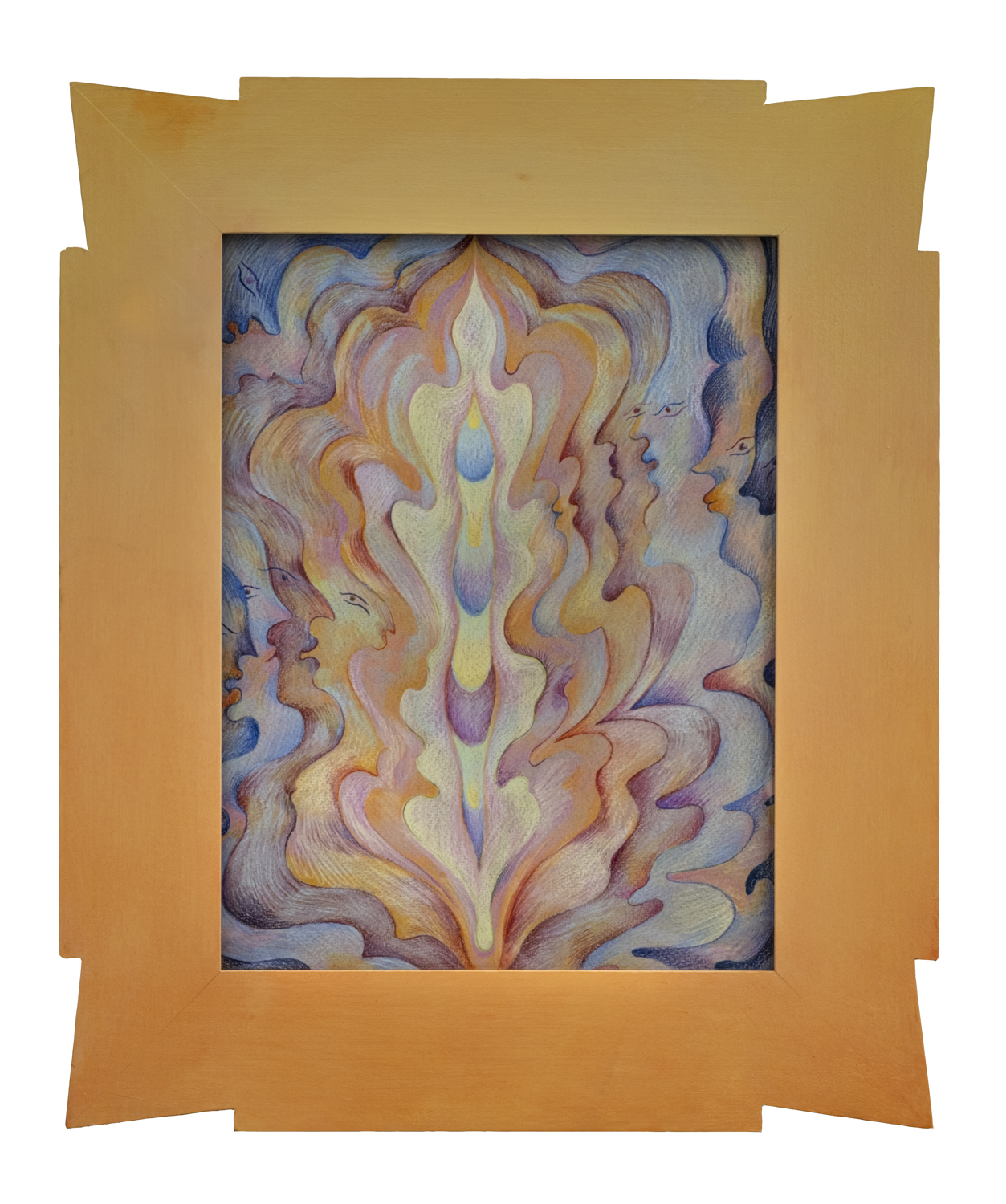 Bea Bonafini is a Rome and London based artist whose interdisciplinary practice draws from oneiric visions, overlapping personal and ancient mythologies. Her tactile, intimate worlds centre around sensuality, vulnerability and fantasy, forming swirling scenarios that are fragmented and multi-layered. Figures are evanescent and transcendental, referencing spiritual imagery where fluid bodies collide, disperse, swim, fly and fall. Bonafini’s work expands the possibilities of painting, tapestry and sculpture and their interrelationships. Holistic perspectives are developed in close dialogue with architecture, where space is approached as an extension to the work to envelop the viewer. Acting as protected spheres, Bonafini’s installations are openings to encounters between the earthly and the otherworldly.

THE POETIC TAPESTRIES OF BEA BONAFINI

‘Speaking of nirvana, it was there / Rare as the feathers on my dash from a phoenix'

The work of Bea Bonafini expands from painting into media and materials commonly associated with textile arts and pottery. But her use of age-old techniques that have accompanied humanity since the dawn of time lends them a contemporary turn. Especially the art of carpet-making – or, in her case, making art with carpets – is reinterpreted into a subtly feminist stance. While her carpet inlays refer to the once female-dominated art of weaving, they are, quite literally, razor-sharp incisions into this tradition. Bonafini is not so much fascinated by the craft itself than by the handling of the products; the industrially manufactured carpets that are the starting point for many of her works thus become the material for a confident process of appropriation that can be seen as a defining feature of her work.

At first glance, all her works are characterised by a harmonious colour palette and a flowing imagery that is often described as sensual, intimate, tactile and eye-flattering. The painterly aspect of her work cannot be denied – she makes it explicit through her choice of motifs, her use of colour and her forays into various painterly domains, such as gouache with watercolour in Cosmic Fruit (2022) or pastel on mixed textiles in Shape-Shifting V[1]  (2018). In interviews, the artist, who is often hailed as a shooting star, repeatedly describes herself as a ‘hybrid painter’ who tries to free herself from the straitjacket of academic painting without betraying her love for it. In her own words, ‘my work spirals out of painting discourse, taking it for a ride through different worlds’.

If one were to look for a key to her work, the concept of pictorial effect (Bildwirkung) might come in handy. This does not merely refer to the effect her art has on visitors, who are regularly enthralled by her exhibitions, but also to the renewal of an ancient cultural practice that brings together two strands: the history of art and the history of technology.

Etymologically speaking, the concept of Bildwirkung has a medieval doppelgänger, Bildwirkerei, which was used to describe both the action that consisted of incorporating images into woven textiles and the result of this technique, the tapestry itself. In other words, pictorial effect and carpet art have always been closely linked; in fact, tapestry in its heyday brought forth iconographic programmes and works that had a powerful ‘effect’ on contemporary audiences, whose experience oscillated between being immersed and being overwhelmed. This artistic genre reached its early climax between 1373 and 1382 in the Apocalypse Tapestry of Angers, with its impressive 103 metres in length and 4.3 metres in height. Although Bonafini is only marginally interested in the implicit gestures of power of such medieval projects, she likes to reference historic works and does so confidently – in 2019, for instance, she created a complex carpet installation for the Zabludowicz Collection in London, inspired by the historic floors of the Siena Cathedral. She consistently takes into account the specificities of the exhibition space and develops stunning exhibition concepts that push the boundaries of painting into the real space and almost physically envelop viewers.

This approach is further enhanced by the figures in her works, which often appear fleeting and transcendent, evoking spiritual images in which flowing bodies collide, dissolve, swim, fly or fall. In Noses and Holes (2015), two stylised heads lovingly commingle, each sticking its long nose through the other’s eyehole to form a powerful image of infinity reminiscent of ancient myths and stories. In Diver (2018), the artist shows a falling – or maybe floating – figure that has been installed on the wall in such a way that it can be viewed from the front and from the back, and whose connection to painting would be entirely lost if it weren’t for the handcrafted composition of the carpet cut-outs, which were assembled in the manner of a painting.

Bonafini’s installations expand the possibilities of painting, tapestry and sculpture by exploring their multiple relationships. In this sense, her work can be read like a coming-of-age novel where the reader – or viewer, in this case – accompanies the artist in the journey that leads her to outgrow her own idea of painting.

Join us on Thursday 29 September for the opening of Bea Bonafini's solo show at Nosbaum Reding | Luxembourg.

The exhibition will be on view from 29 September to 5 November 2022.