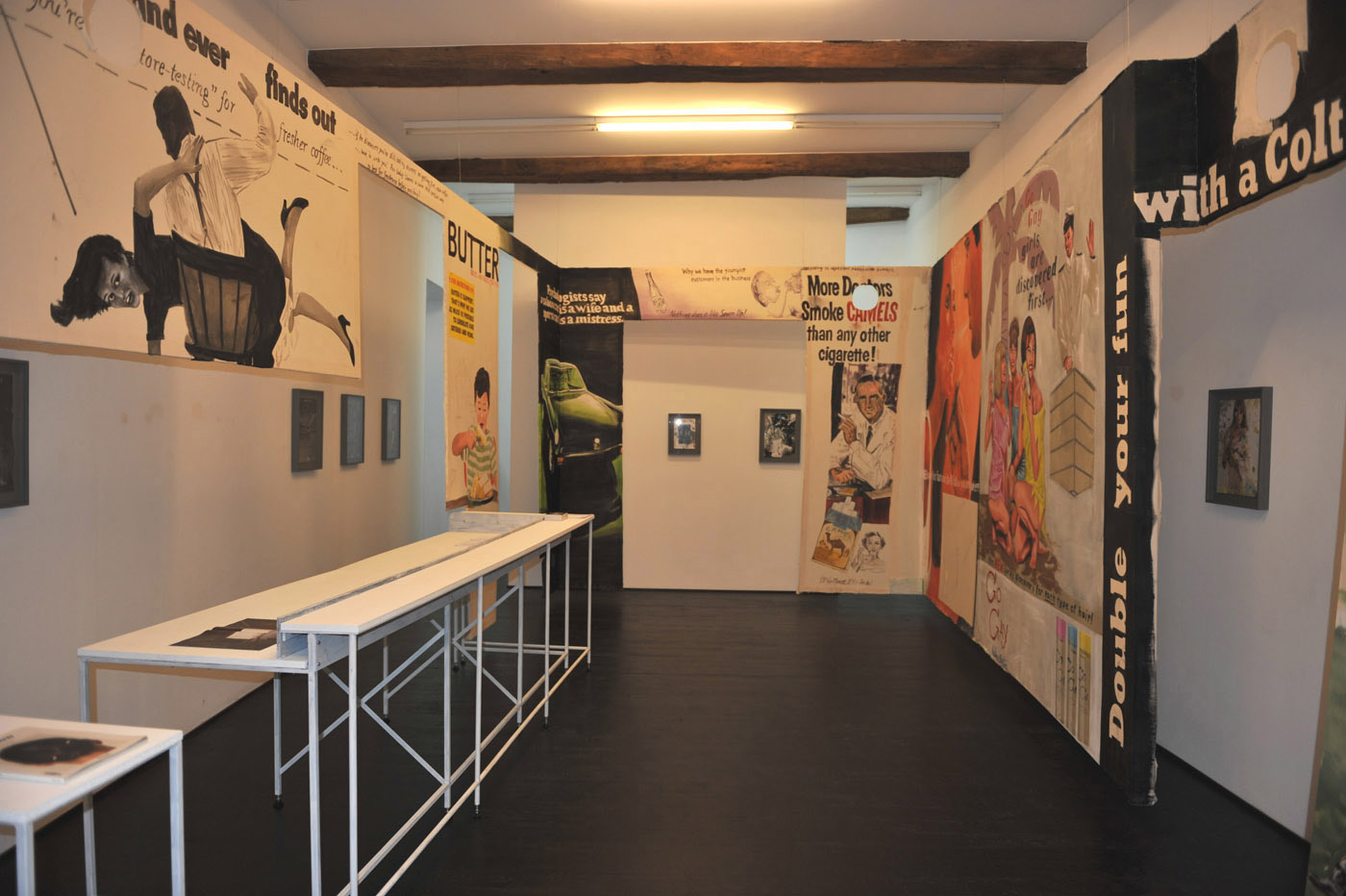 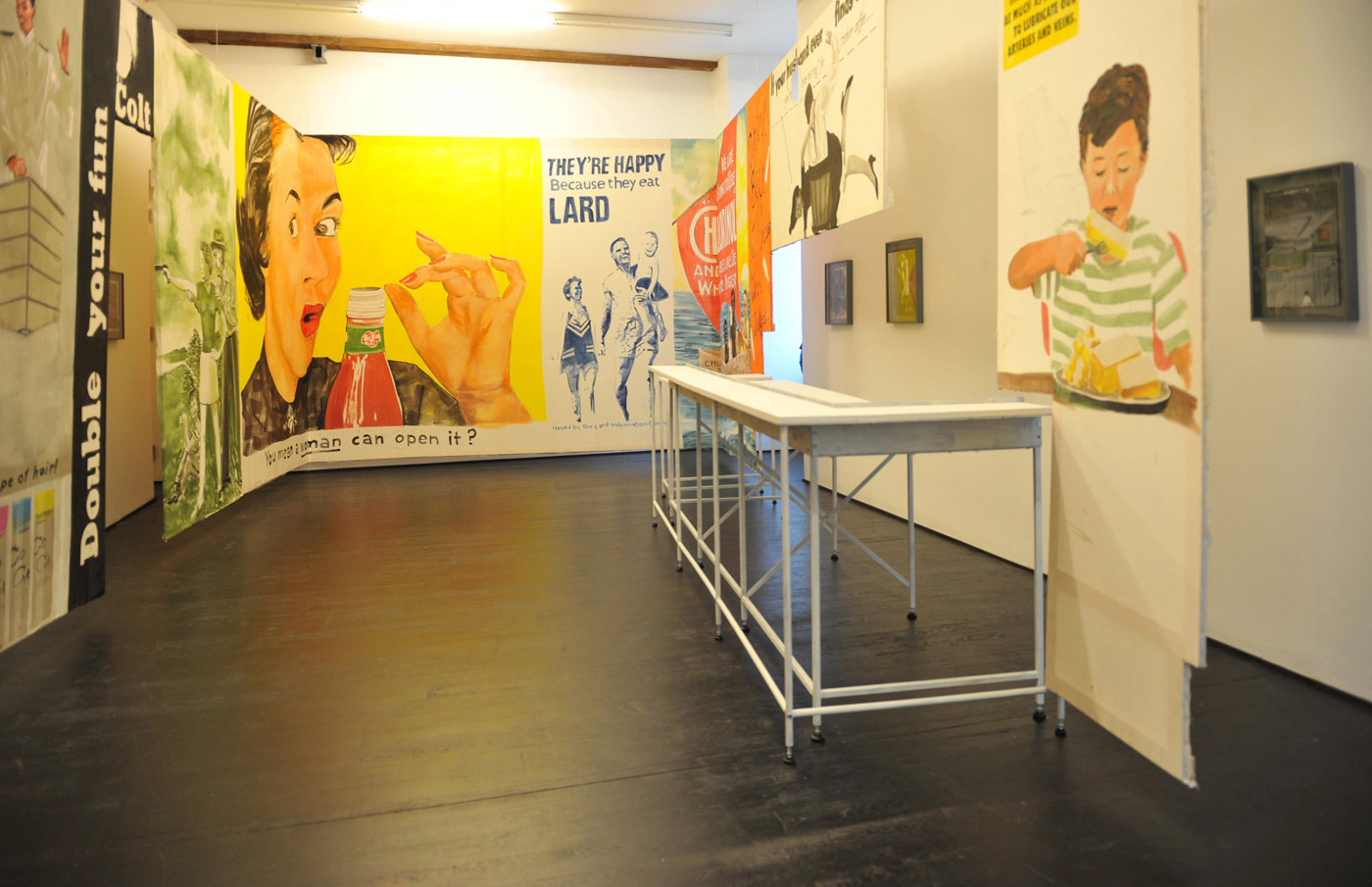 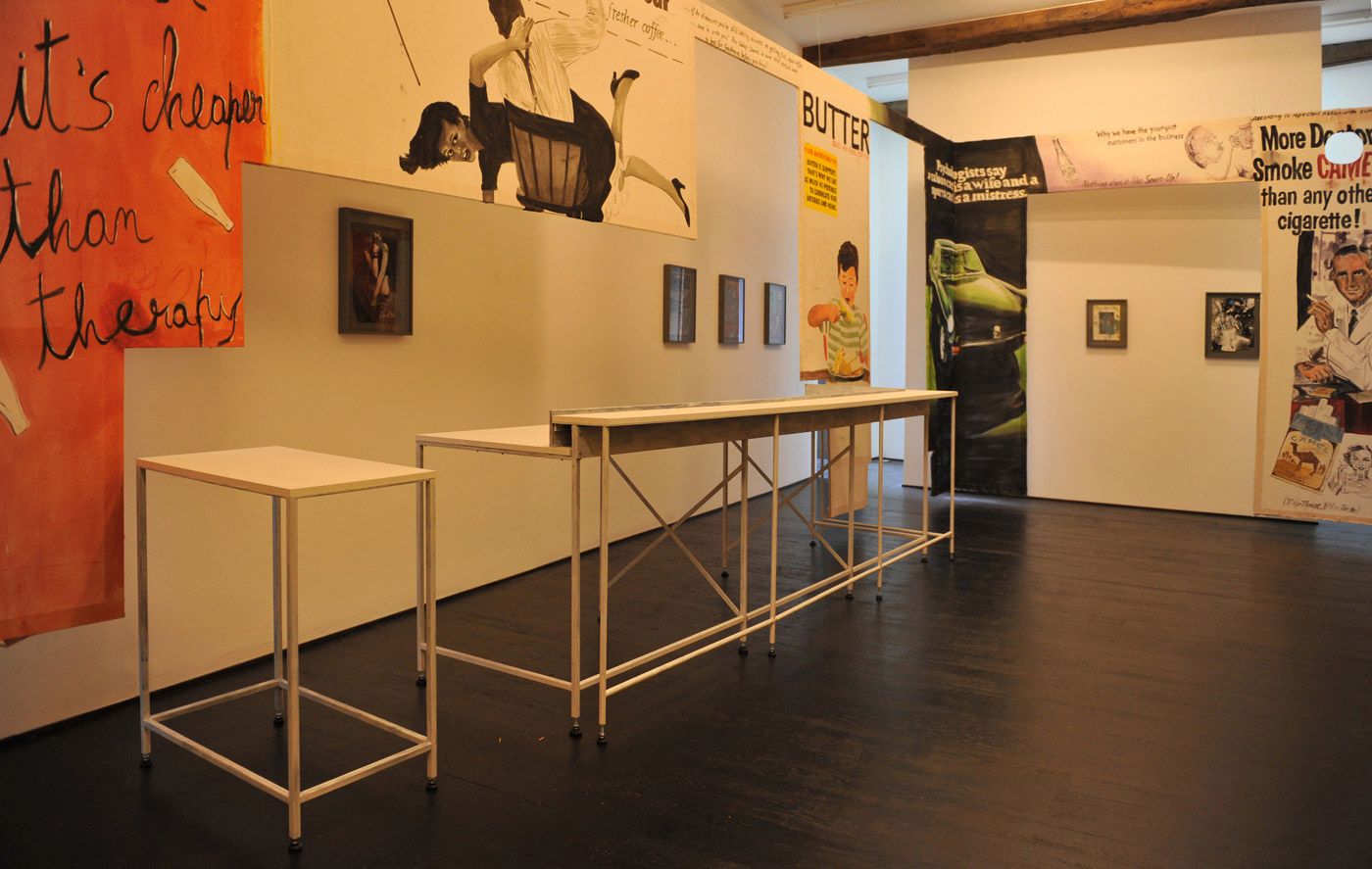 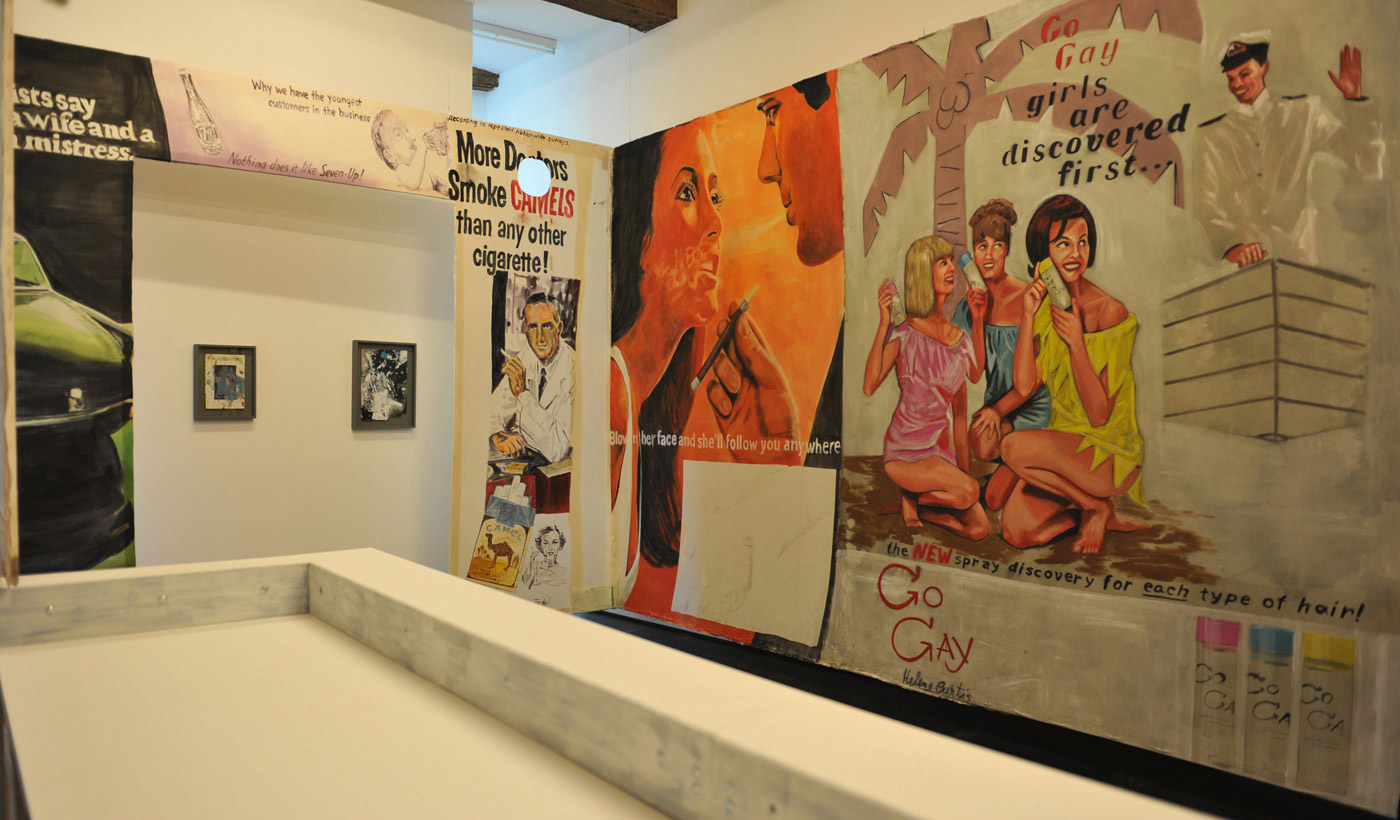 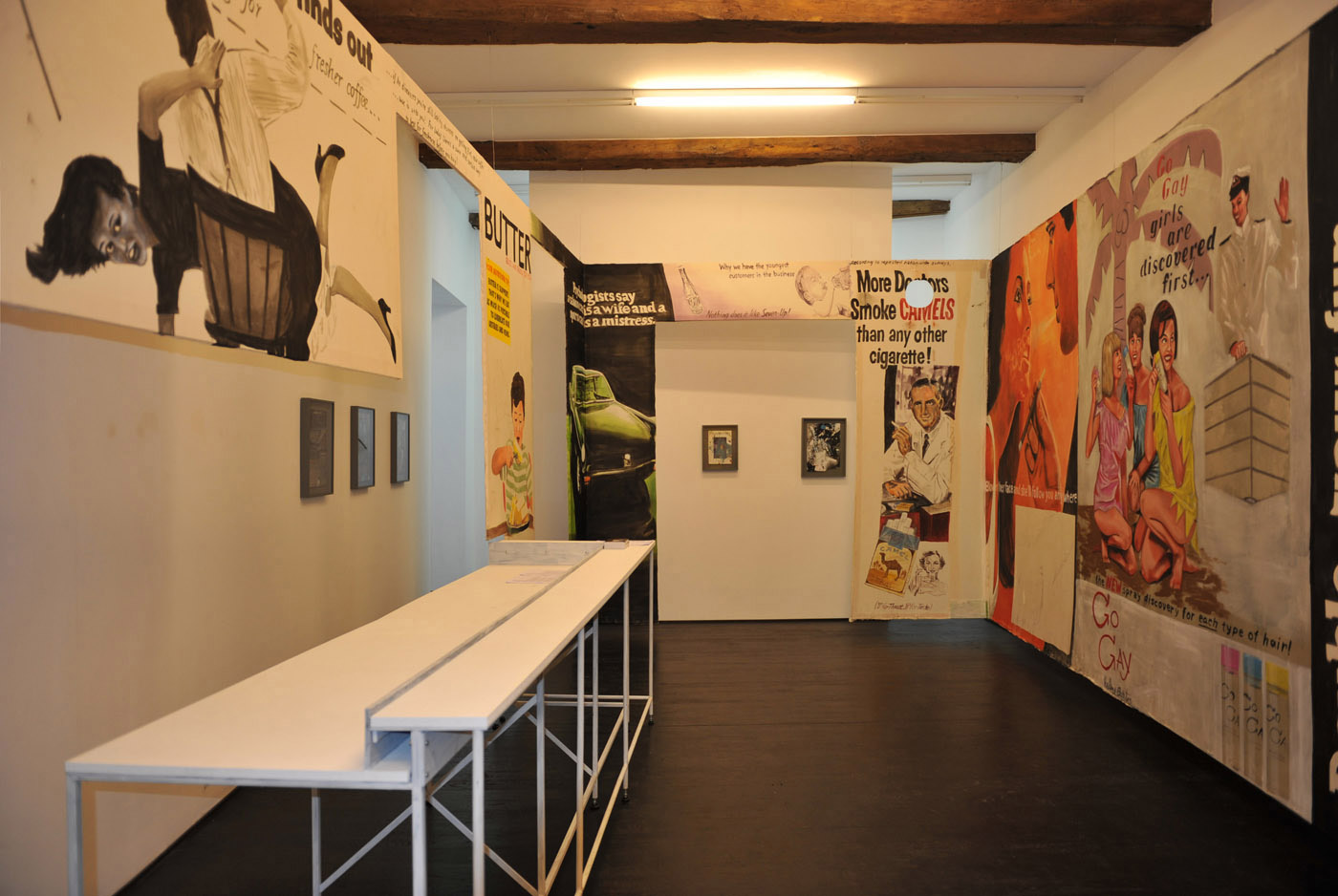 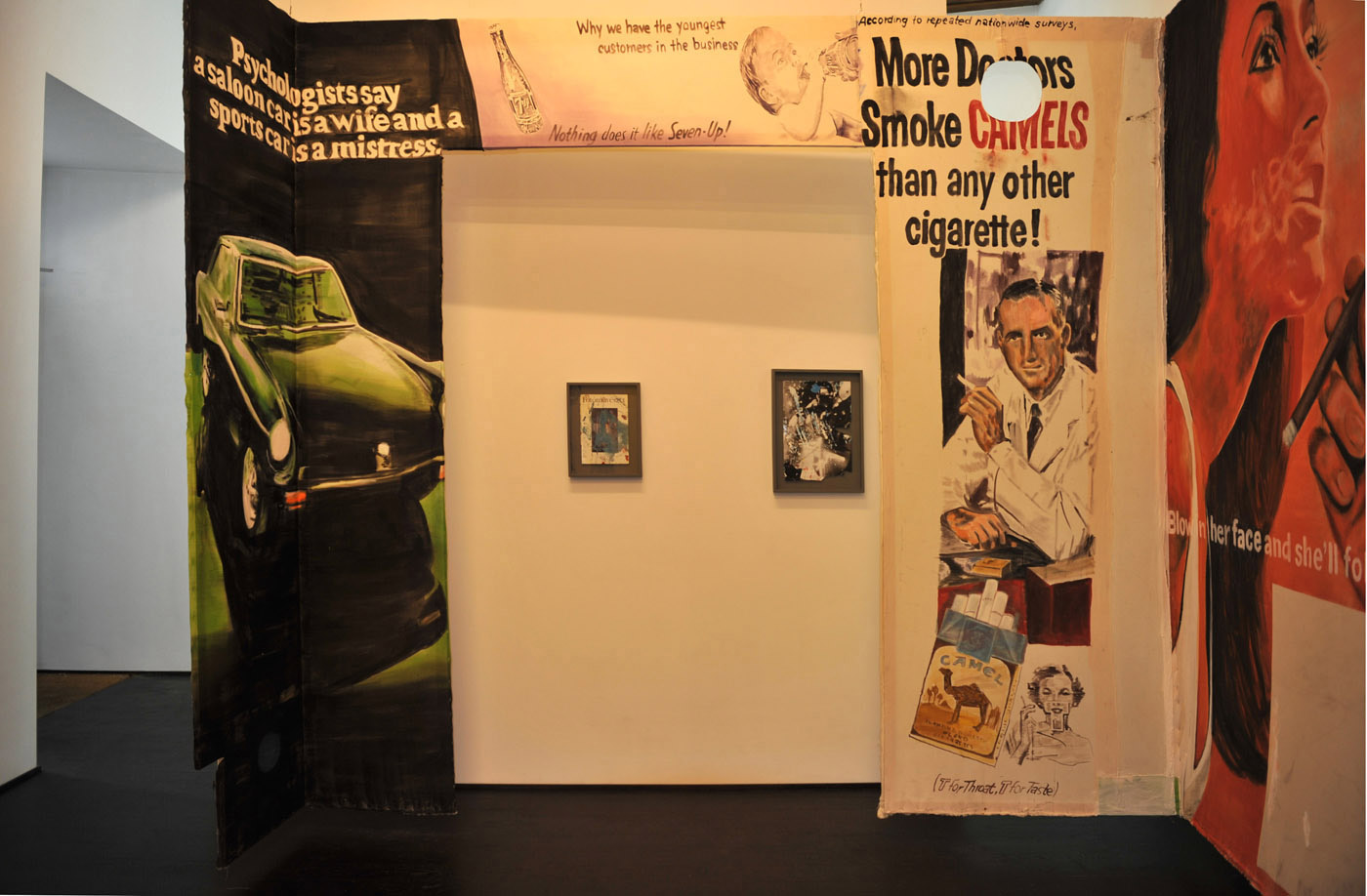 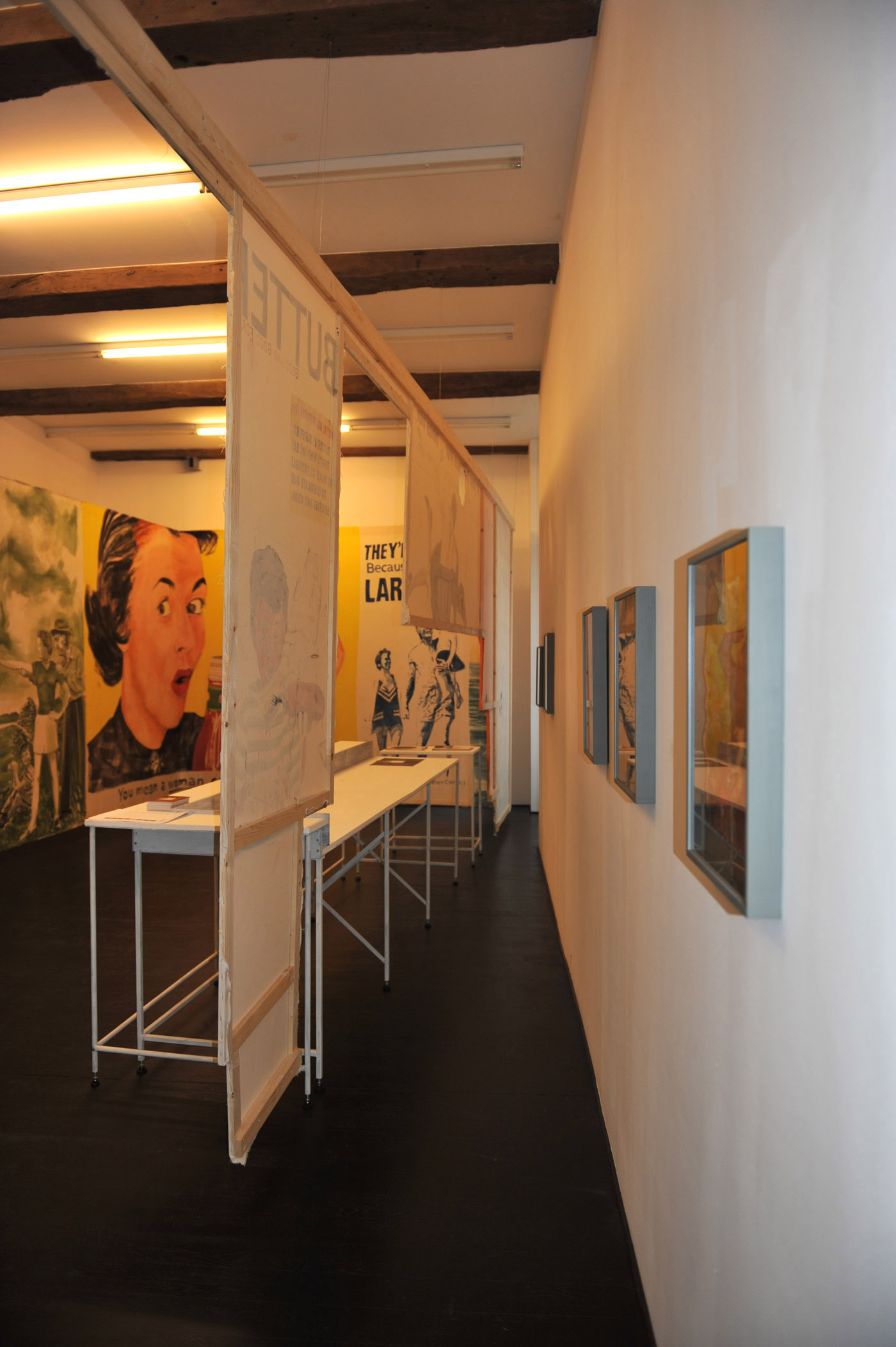 For his third solo exhibition at Nosbaum & Reding the Portuguese artist Hugo Canoilas is restaging a work originally conceived for the artist-run space Ve.Sch (Verein für Raum und Form in der bildenden Kunst) in Vienna. Presented in May this year, this installation inverted the habitual functions of the two spaces that constitute the gallery: a wall-sized painting transformed the bar area into an installation, while the exhibition space properly speaking accommodated the seats, benches and tables from the bar. Visitors were encouraged to use the furniture and thus became actors or performers of a work that highlighted the contextual nature of our perception of art.

Canoilas's painting, in turn, took the shape of a large canvas covering the walls of the bar and played with the idea of passiveness by using historic advertisements found on the Internet. Despite the ads’ political incorrectness - praising the virtues of tobacco, alcohol and guns, among others - their transfer into the medium of painting and the effect resulting from their accumulation eventually undermined their seditious potential and opened a wider reflection on the power of images.
At Nosbaum & Reding Canoilas will show the canvas used in Vienna, suspended in the centre of the gallery like a membrane or skin – the creased remains of a past intervention whose “remastering” is completed by a variation of the Viennese bar designed by Martin Vesely, artist and manager of Ve.Sch. By updating and recontextualising his work, which appropriates the name of the artist-run space, Canoilas invites spectators to reconsider the concepts of originality and functionality while questioning the notion of in situ work. His installation is surrounded by a series of small paintings on newspaper or magazine clippings; resulting from processes in which chance plays a key role, they explore the potential of painting as a mediator of everyday reality.

Hugo Canoilas (born 1977 in Lisbon, lives and works in Vienna, Austria) has participated in numerous solo and group exhibitions in different offspaces, art centers, museums and institutions at international level like the 30th São Paulo Biennial in Brazil (2012), the cultural center Vila Flor CCVF in Guimarães, Portugal (2011) (with the publication of an accompanying monographic catalogue “Paintings against Painting”), the National Museum of Contemporary Art Museu do Chiado in Lisbon (2011), the Espace 1M3 in Lausanne (2010), the Huarte Contemporary Art Center in Spain (2008), the Frankfurter Kunstverein in Frankfurt (2007).