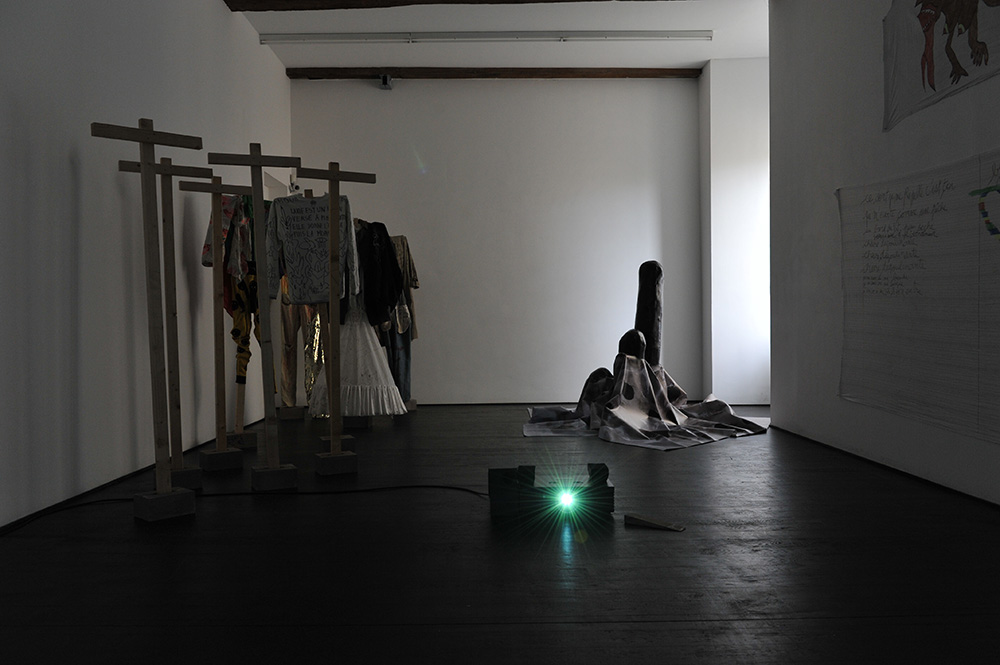 My Legs Up And Exposed To The World My Bottom Under The Jean-Trousers is an accurate mimic description of this exhibition: the V-shaped legs of an individual pushing out to spread the genitals. Underlining an upcoming generation of urbanites, the choral discourse of Bouvy, Dudu and Ots avoids the mere formalities to wander around explicit sex, poetic desperation and destruction to sing an anthem to the underground living.

"I just woke up to a gorgeous morning in The Land of Sculptures; in the office they must be waiting for my last review. The Era of The Denial of The Material has passed away, leaving a green field for us, friends, and those early years of The Era of The Objects Arrangement are witnessing a return to The Classic Form. This is not a big deal, as History delights us with a multiple flux of intercrossing waves, but I happen to be sitting in the very middle of a carrefour and my assignment is wide in scope. From the single window in my apartment, I can see three stone-like erections; they remind every single one of us of the three foundational menhirs from whom this land took its name, who have been absent without explanation since the beginning of The Era of The Denial of The Material. Only now the rapidity of the transformations have forced a temporary solution for The Three Fingers of The Land of Sculptures. Those three fingers are very significantly named The Left, The Centre and The Right. As I am writing this, there are a couple of supervisors throwing themselves repeatedly against The Left, then across at The Right, back to The Left and so on and so forth; each time meticulously avoiding The Centre, where a group of The New Community Helpers collects signatures to ensure those inflatable structures stay as ballooney as they are today. This is no nonsense as three cocks are better than none and two of them would be as irrelevant as marriage, thus the scene makes complete sense. Secretly, I have already heard that these three promptly blown inflatable gadgets will remain, as they are, a symbol of the early vanguard of The Era of The Objects Arrangement.

A clerk from The Ministry of Education phoned me yesterday: they will soon present their new program for The Sculpture Archival Method, with the aim to fill up our galleries with new blood to measure the brand-new objects. There have been serious changes in the standards of documentation; this I am very aware of since I was invited to attend The Measurement Committee that was set up at the time of The Declaration of The Genesis of The Era of The Objects Arrangement. I have always liked students, and it is the perfect time for them to join us because they wave flags and they are difficult to frighten, because they are birds, chemists, doctors, surgeons and dentists. A long life to Astronomy! I like them because they are not afraid of the police.

Someone arrived to the gay street, opened their arms, took a deep breath and said: “THESE ARE MY PEOPLE”. The boy turns back, I lay down on the couch, my legs up, and expose to the world my bottom under the jean trousers."  - Excerpt of Retrospective, a short novel by Alberto García del Castillo edited by Shelter Press.