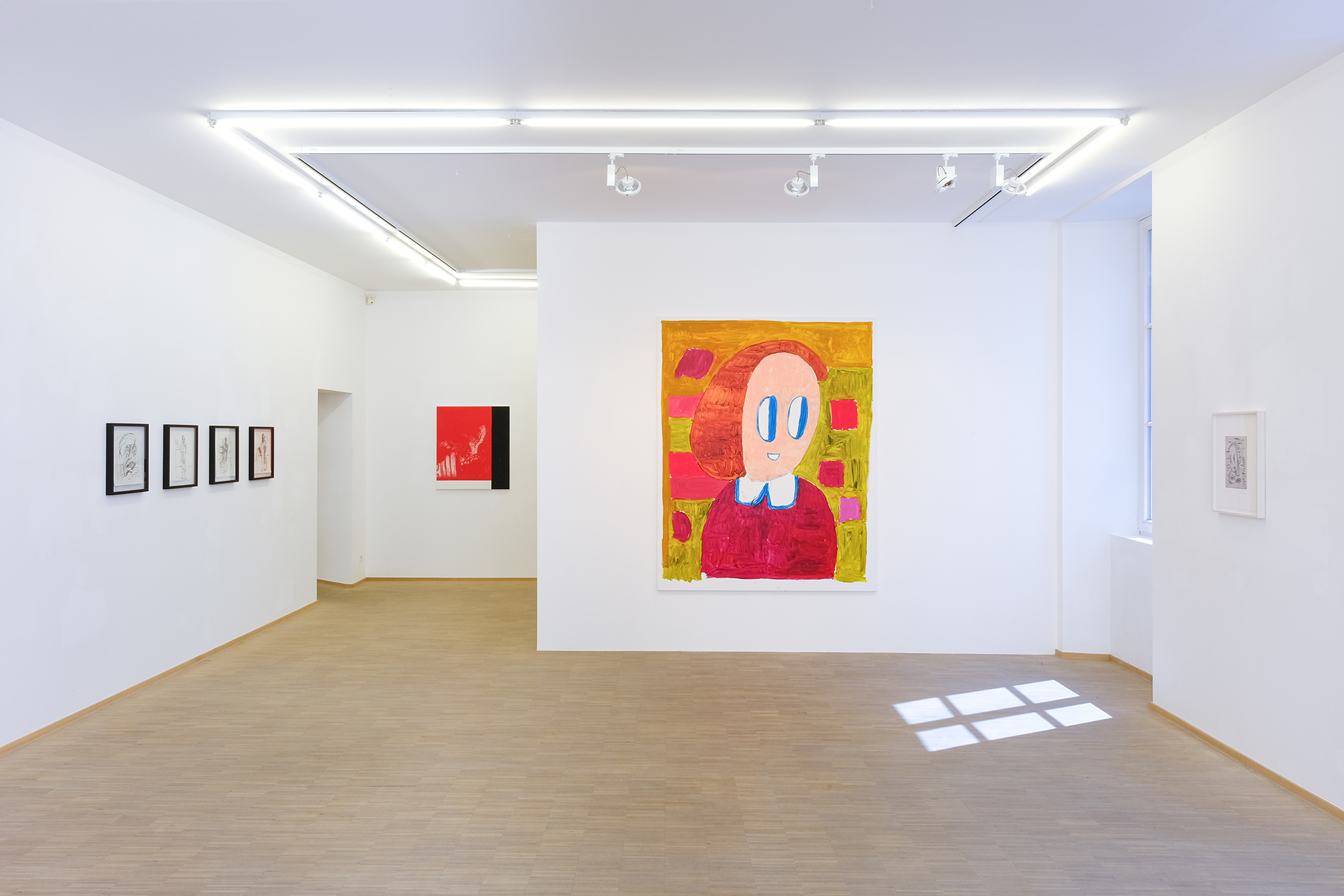 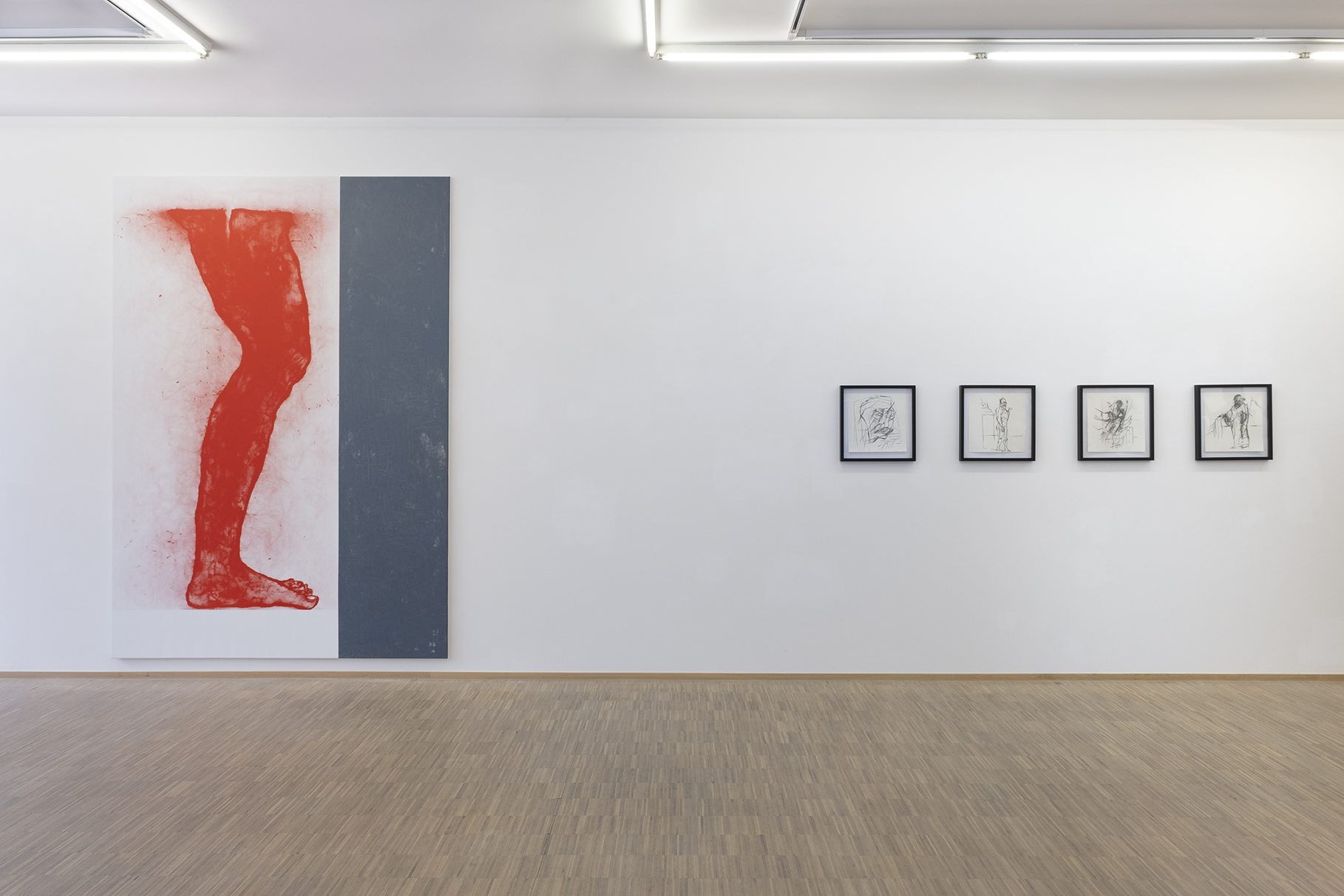 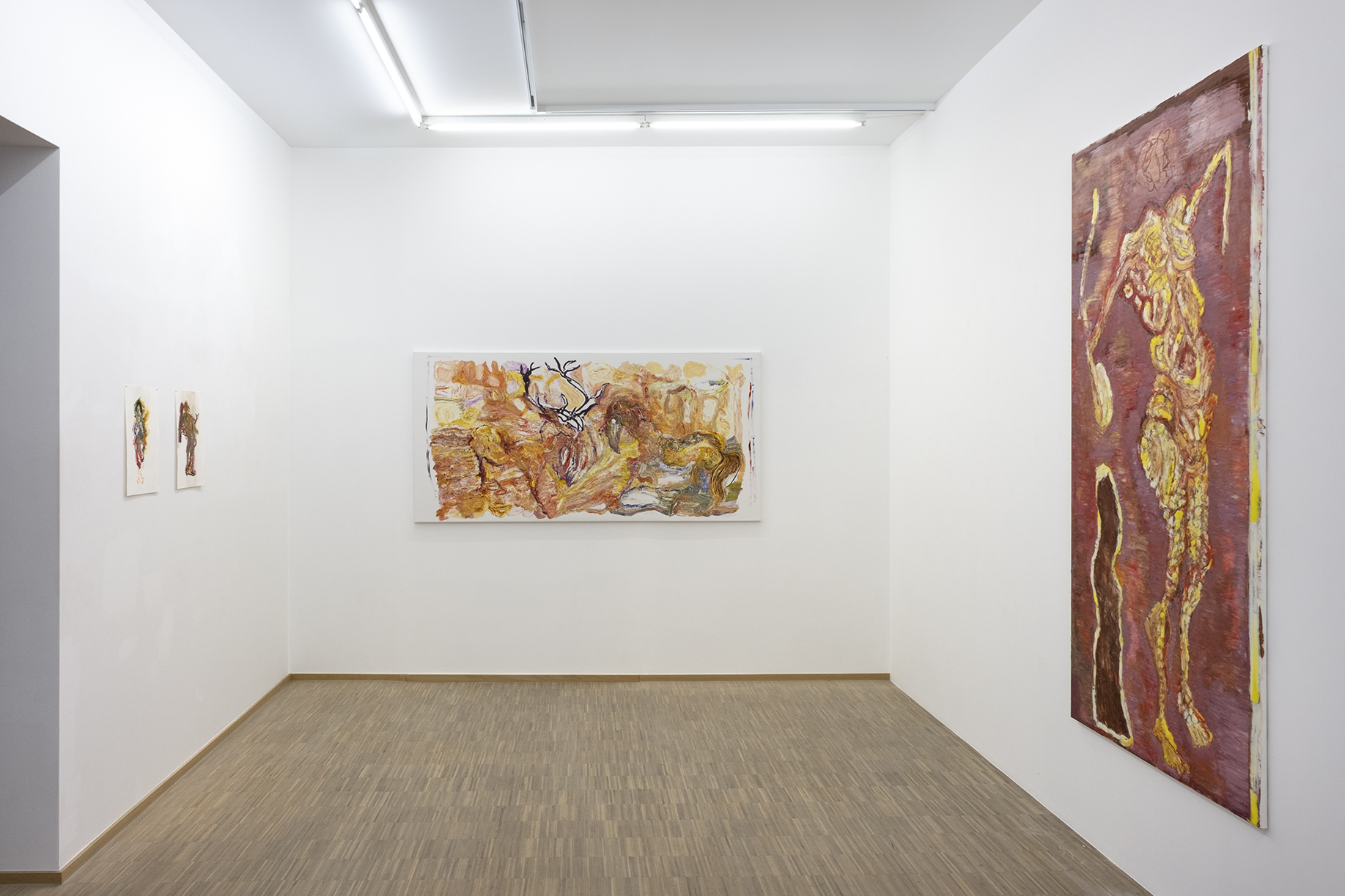 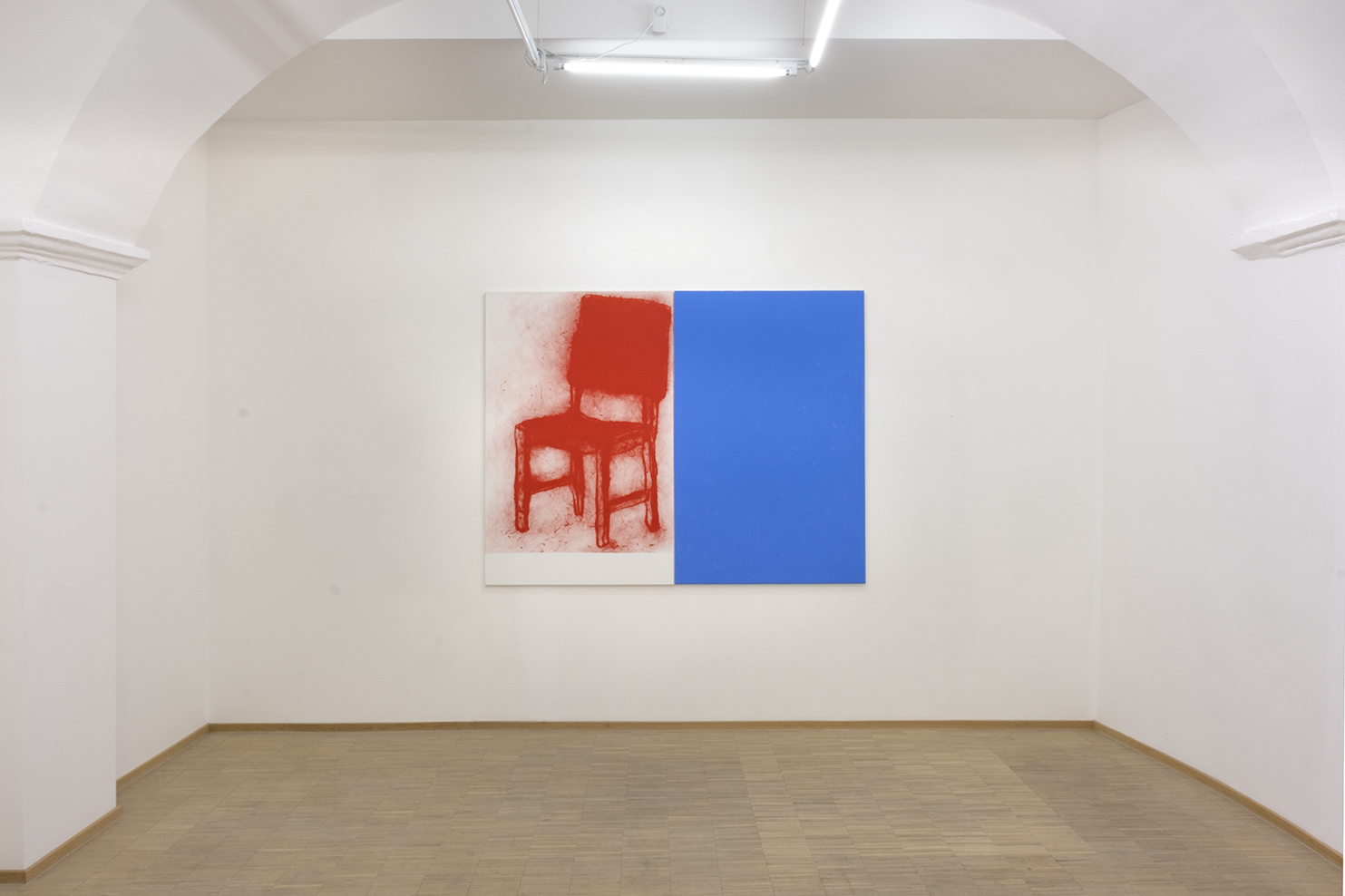 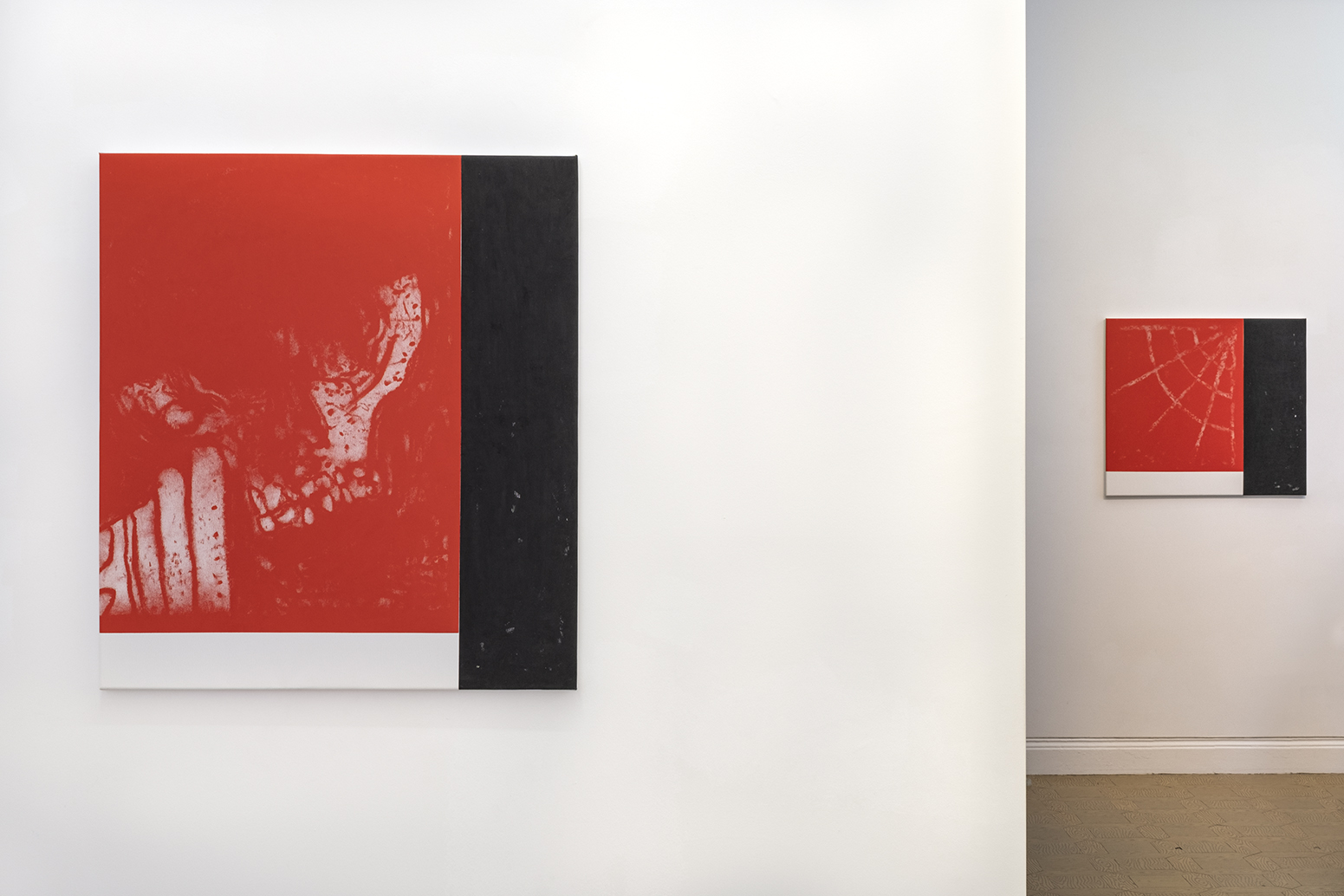 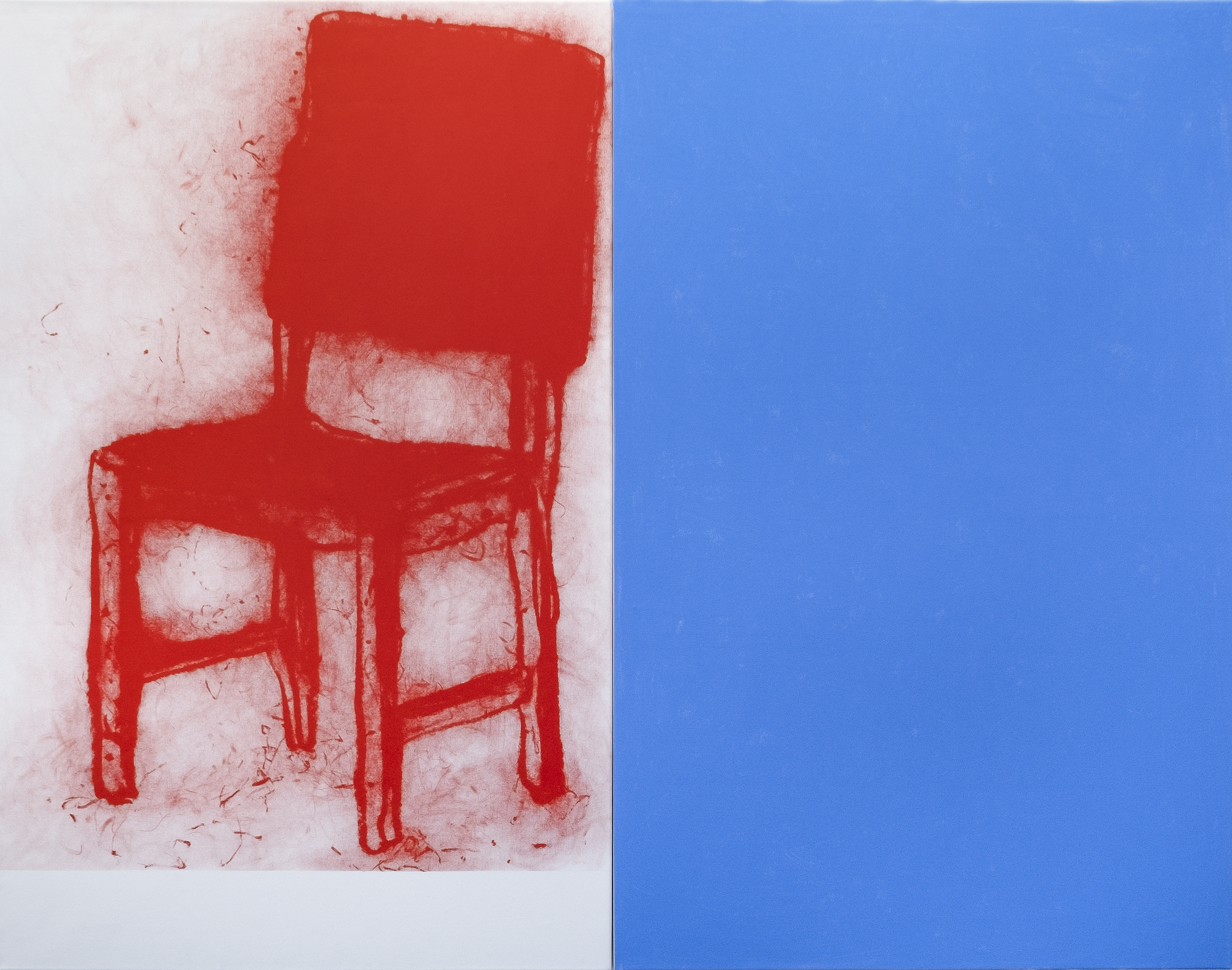 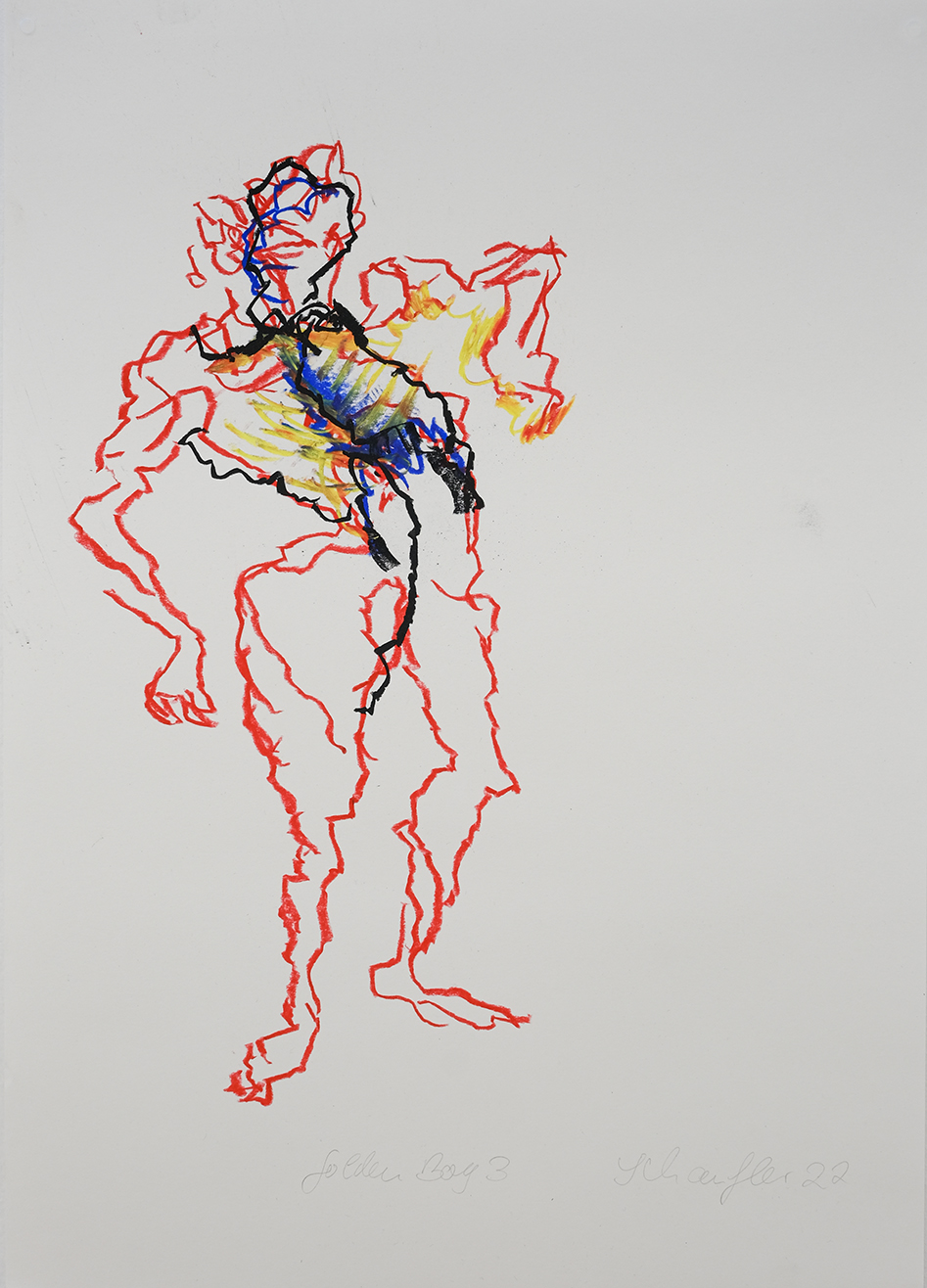 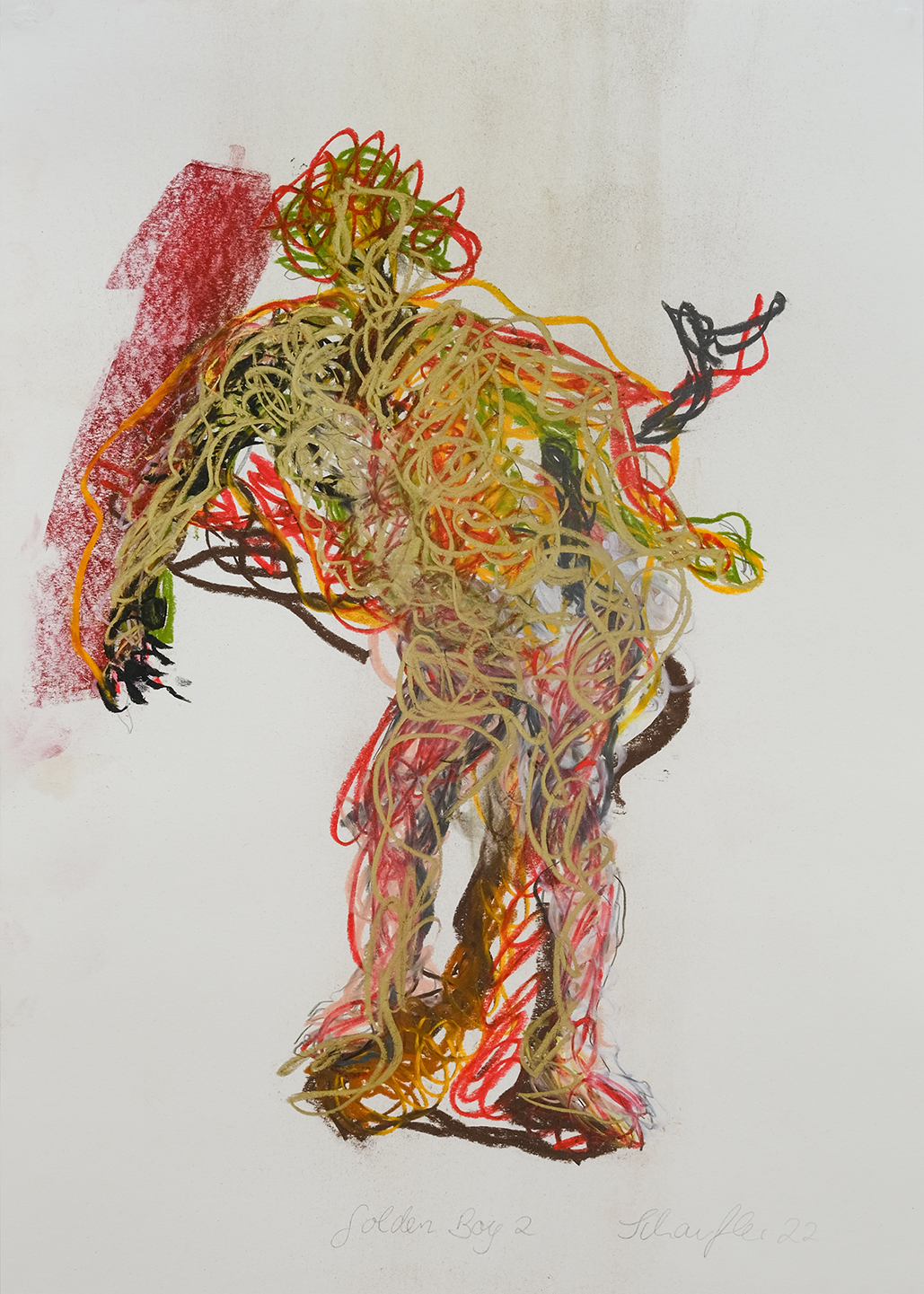 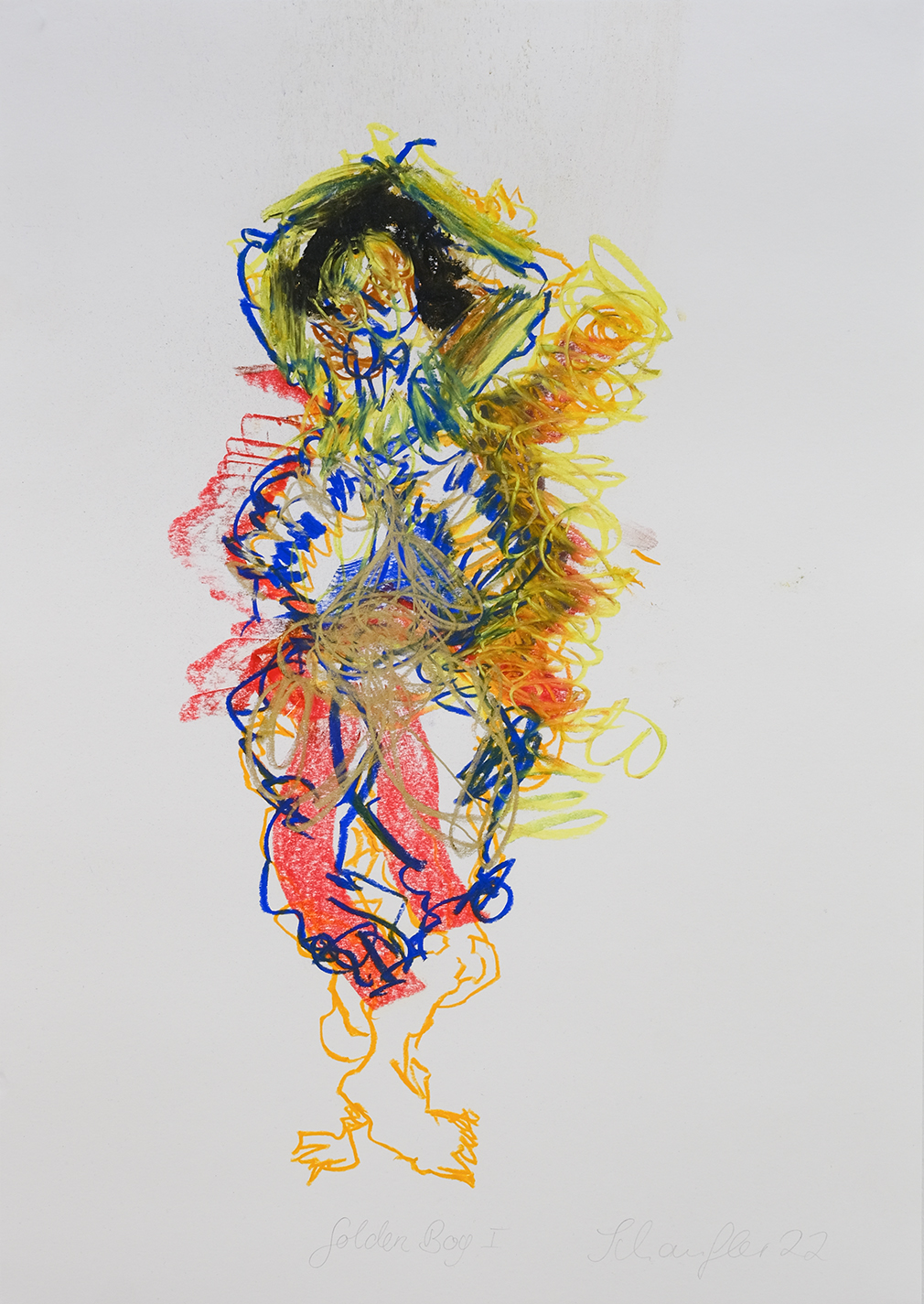 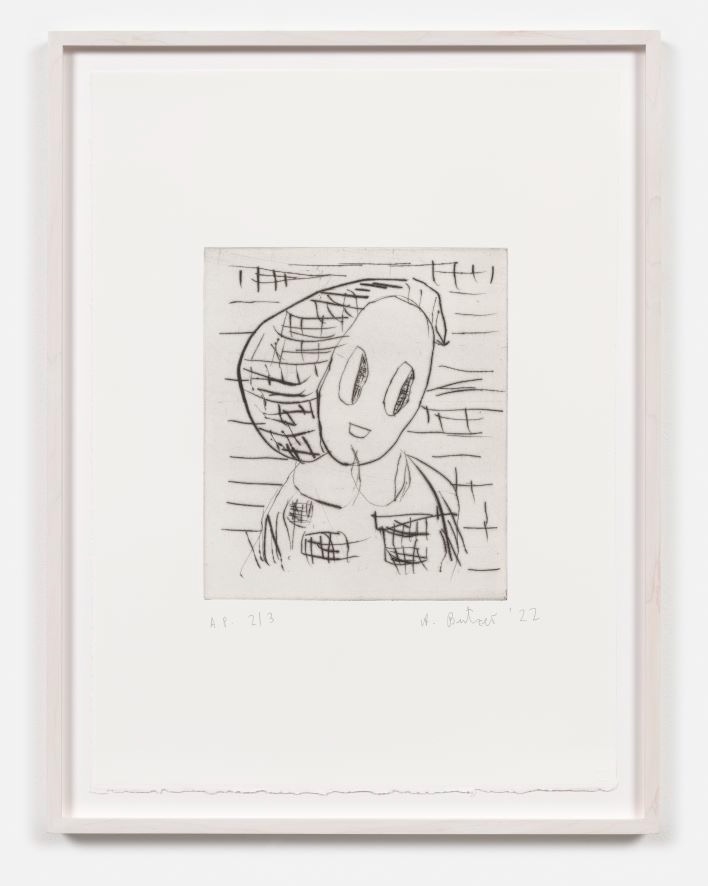 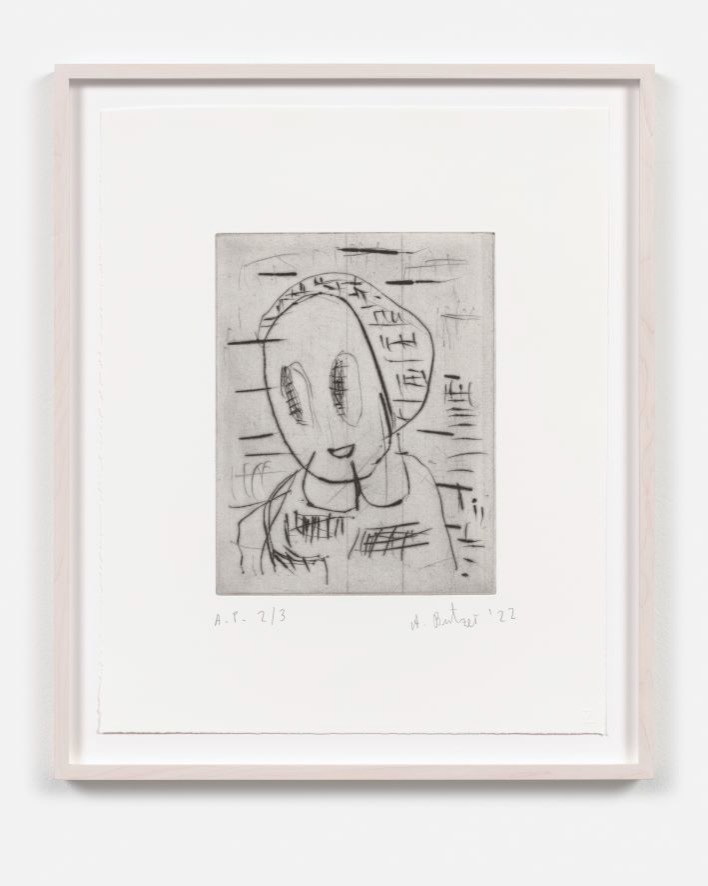 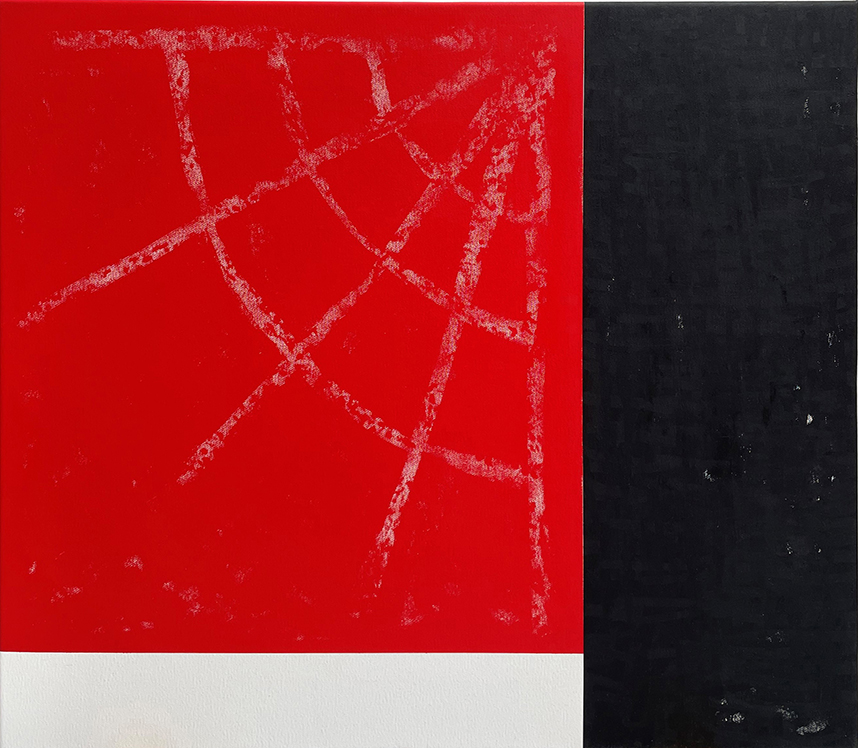 Group exhibitions often become a special think tank for artists, and as art lovers we observe how their thoughts and experiments play out on the walls of galleries and museums. This exhibition, simply titled Malerei or “painting” brings together three German artists, known personally to each other, who have emerged from the 90s determined to push the potential of paint on canvas to the limit.

Martin Kippenberger, who is well-known for innovative reflections and experimentations, was Schaufler’s professor at the Hochschule für bildende Künste in Hamburg. In Schaufler’s case the question of what paint does is explored through a process of deconstruction. His depiction of shepherds (Hirte) subvert the idea of the sublime and the sentimental of 19th century pastoral painting using the abstracted, raw, colourful emotion associated with expressionism. Landscape, emotions, figure, form and colour become one tempestuous swirl; our outer perceptions are deliberately denied clarity so that we can focus on the effect the painting is having on our emotions.

Butzer’s colourful cast of cartoon characters populate his canvasses in a universe that is unique to him, much like Walt Disney’s cast of cartoon characters was unique to his creative world. And yet it could be argued that his figures are placed at the service of his explorations into the potential of colour and light. The paint bounces off the canvas with seemingly impossible brightness. This painterly ability, reminiscent of Matisse and Cezanne amongst others, fused with the vibrant energy of American pop culture has earned him widespread recognition as an artist and his work graces numerous prestigious collections, not least the Saatchi Gallery in London.

Arnolds is completely radical in his pursuit of malerei. Neither the leg you see nor the spider’s web matter, they are an excuse to experiment with layers, lines, light and colours, adding, subtracting, blurring and contrasting them as the artist sees fit. His training as a stone mason shines through each work, which he builds up or cuts down layer by layer like architectural motifs that can be bent to his will. His domination of the canvas is palpable, which, together with his drive to challenge himself, experiment and push painting to its limits make him a popular and important figure in the contemporary art scene.

Willem de Kooning once said in an interview with Anne Parsons, “It was so important, getting together, arguing, thinking”.[1] And in many ways this is exactly what this exhibition, is proposing – a dialogue, shared thoughts and an argument between André Butzer, Thomas Arnolds and Matthias Schaufler, three artists who have grown together in their art, tackling the fundamental question of what Arnolds, the Nosbaum Reding in-house artist eloquently dubs “the reality of painting”.[2] This is a debate on canvas, and, as ever, you, the collectors, are invited to participate.