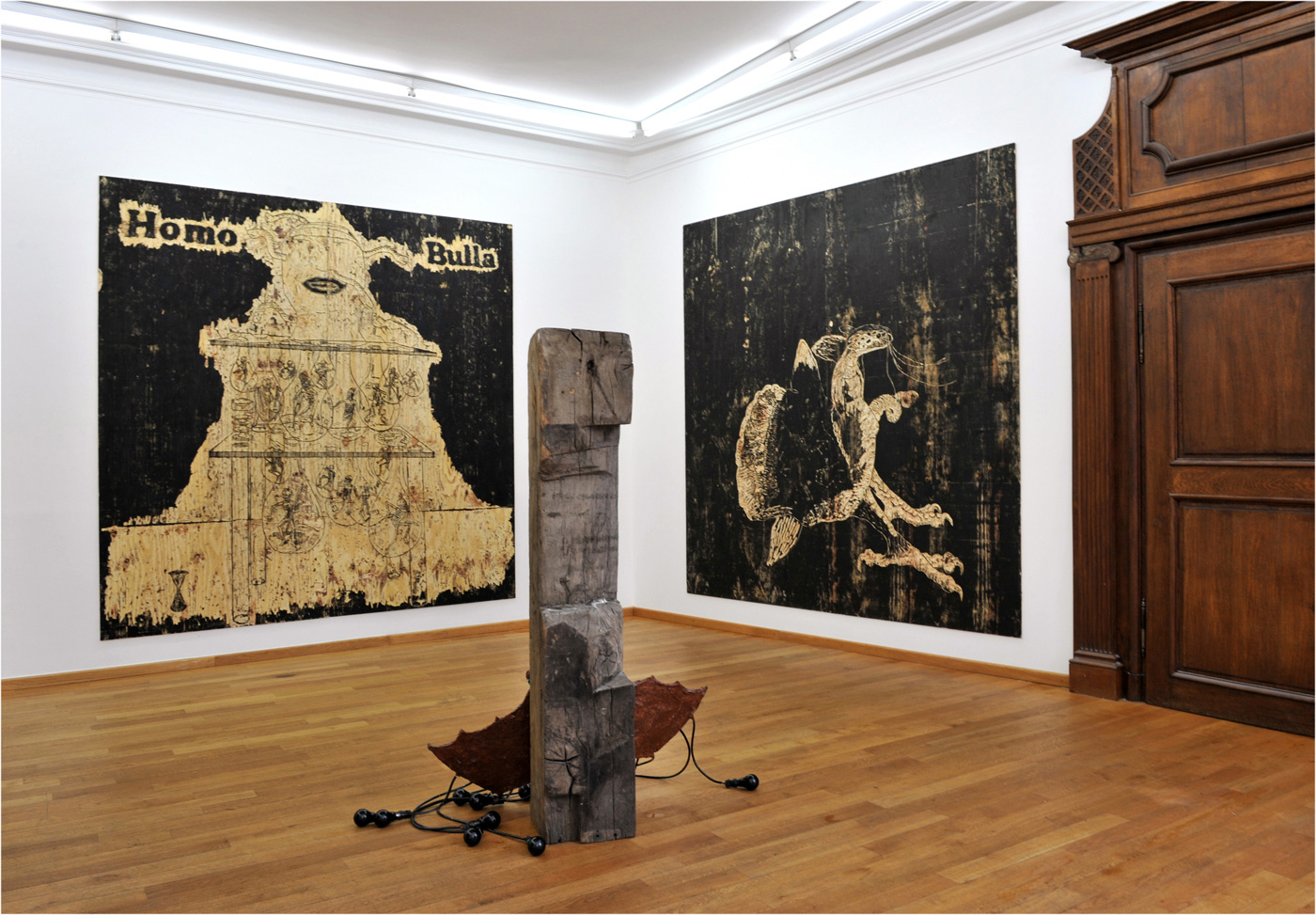 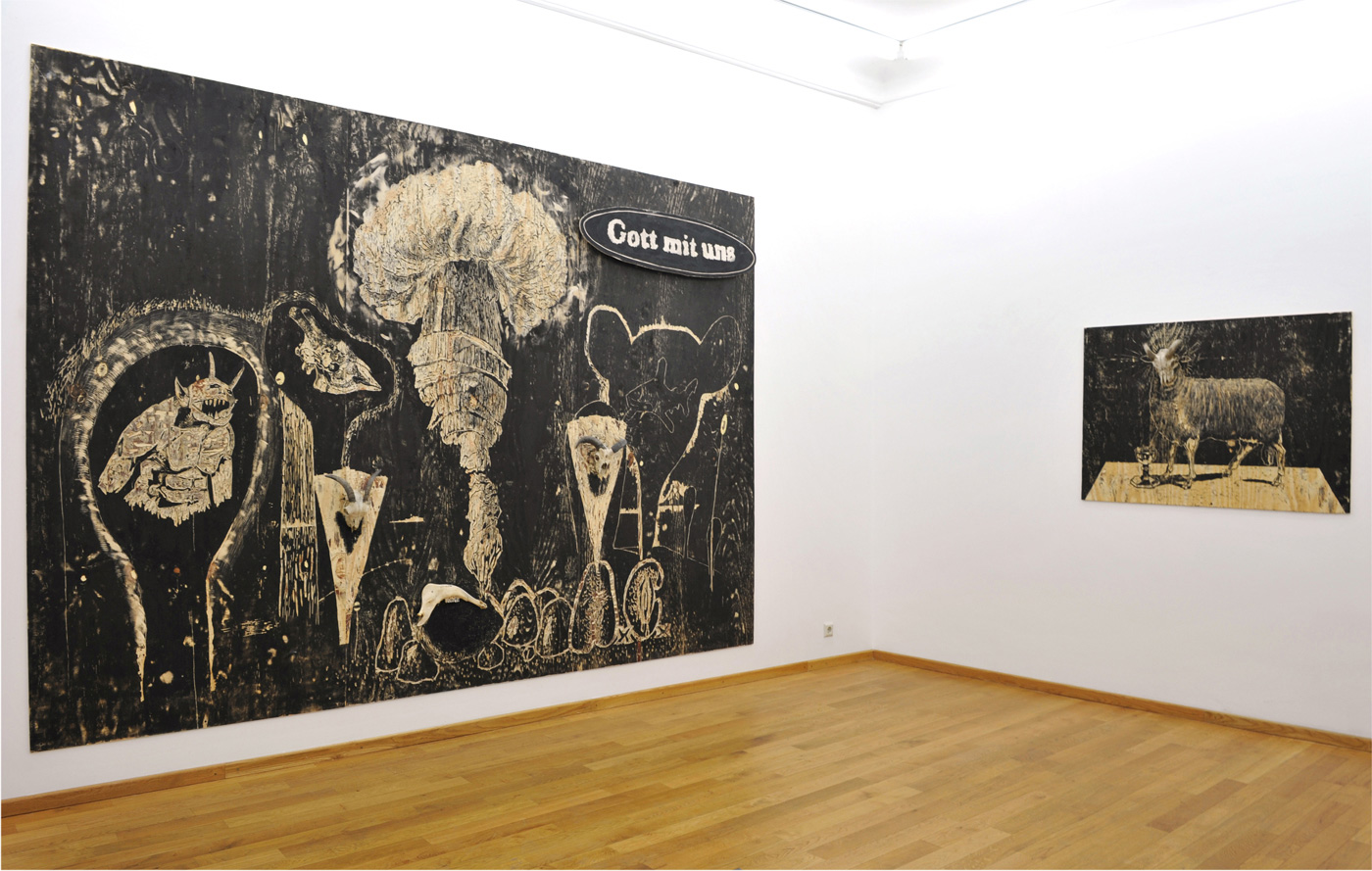 In his fourth solo exhibition at Galerie Nosbaum & Reding, Damien Deroubaix (born 1972 in Lille, France, lives and works in Berlin) is presenting a series of five woodcuts alongside new etchings and drawings. With its various references to the history of art and popular culture, the work of the young French painter and sculptor bears witness to an ongoing interest in the symbolic language of death, which he combines with the vernacular of advertisement, music and finance to take a both critical and ironic look at contemporary society.

Drawing on the iconography that characterises his paintings and watercolours on paper, Deroubaix’s engravings take the shape of large wooden panels adorned with a series of found objects – a tyre, ram skulls, hair, vine shoots… – acting as so many reminders of reality. Hit the Lights (2011), the work from which this exhibition borrows its title, thus features a black bat on the backdrop of a series of concentric rings reminiscent of a target. Reprising a motif from an installation the artist conceived specifically for his solo exhibition at Bloomberg Space in London in 2010, it refers to the life of Saint Anthony (ca. 250–356), the first known anchorite in the history of Christianity, for whom the bat symbolised man’s ‘vainglory’.

Representing a chimera, EA, Lord of the Depths (2011) refers to a song by the Norwegian Black Metal band Burzum, a name borrowed from J. R. R. Tolkien’s Black Speech in The Lord of the Rings, where it means ‘darkness’. Since Homer, whose description in the Illiad is the earliest surviving literary reference of the Chimera, this mythological figure is said to combine the physical and symbolic attributes of several animals. Long seen as an image of Satan, it also refers to our unconscious (‘chimerical’) desires and fantasies, which can only be overcome by catharsis, achieved through the spectacle of cruelty and human vanity. By combining the image of the Chimera with the Sumerian God mentioned in the song – Enki or Ea, the ‘God of Life’ who is represented by a goat and a fish –, Deroubaix further underlines its ambivalence, which is also evoked in the figure of the Ouroboros, a snake eating its tail which symbolises the eternal cycle of life and death.

Following this mythological thread, Homo Bulla (2011) consists of a wooden carving after a sculpture made from transparent glass bulbs manufactured in the historic Meisenthal glassworks, in the French Vosges region, on which the artist engraved motifs inspired from the Heidelberg Dance of Death (1488), one of the first known manuscripts to depict a Danse Macabre. The image of Death summoning individuals from all walks of life to their grave first appeared in late medieval Western Europe as a response to the devastations caused by the plague and has inspired generations of artists throughout history, as witness for instance the works of Hieronymus Bosch, Pieter Brueghel and Albrecht Dürer. In Deroubaix’s work, the plague is substituted with the ills of contemporary society, whose imminent collapse is announced by Gott mit uns (God with us, 2011) and World Downfall 2 (2009), the two woodcuts that conclude the show.