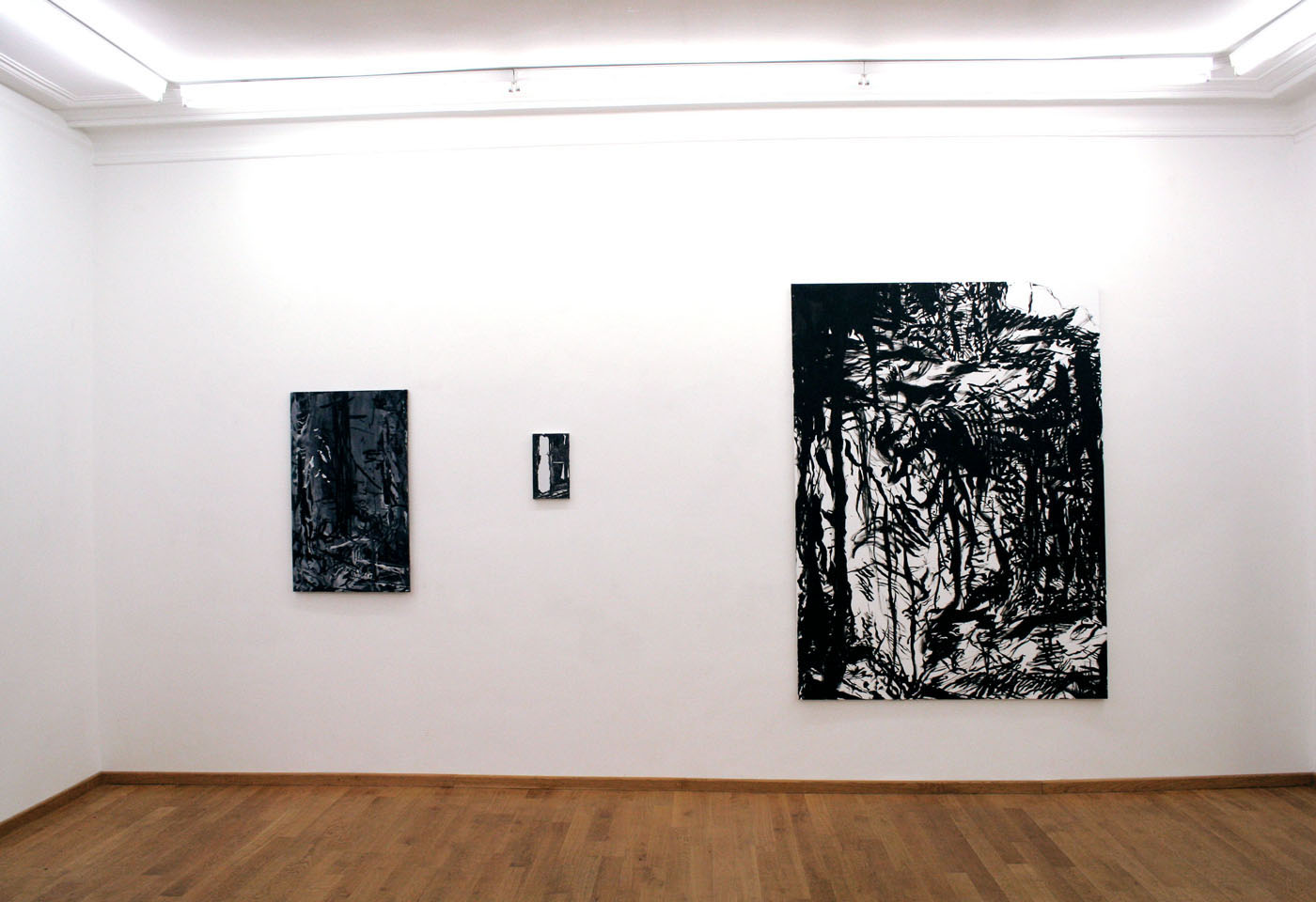 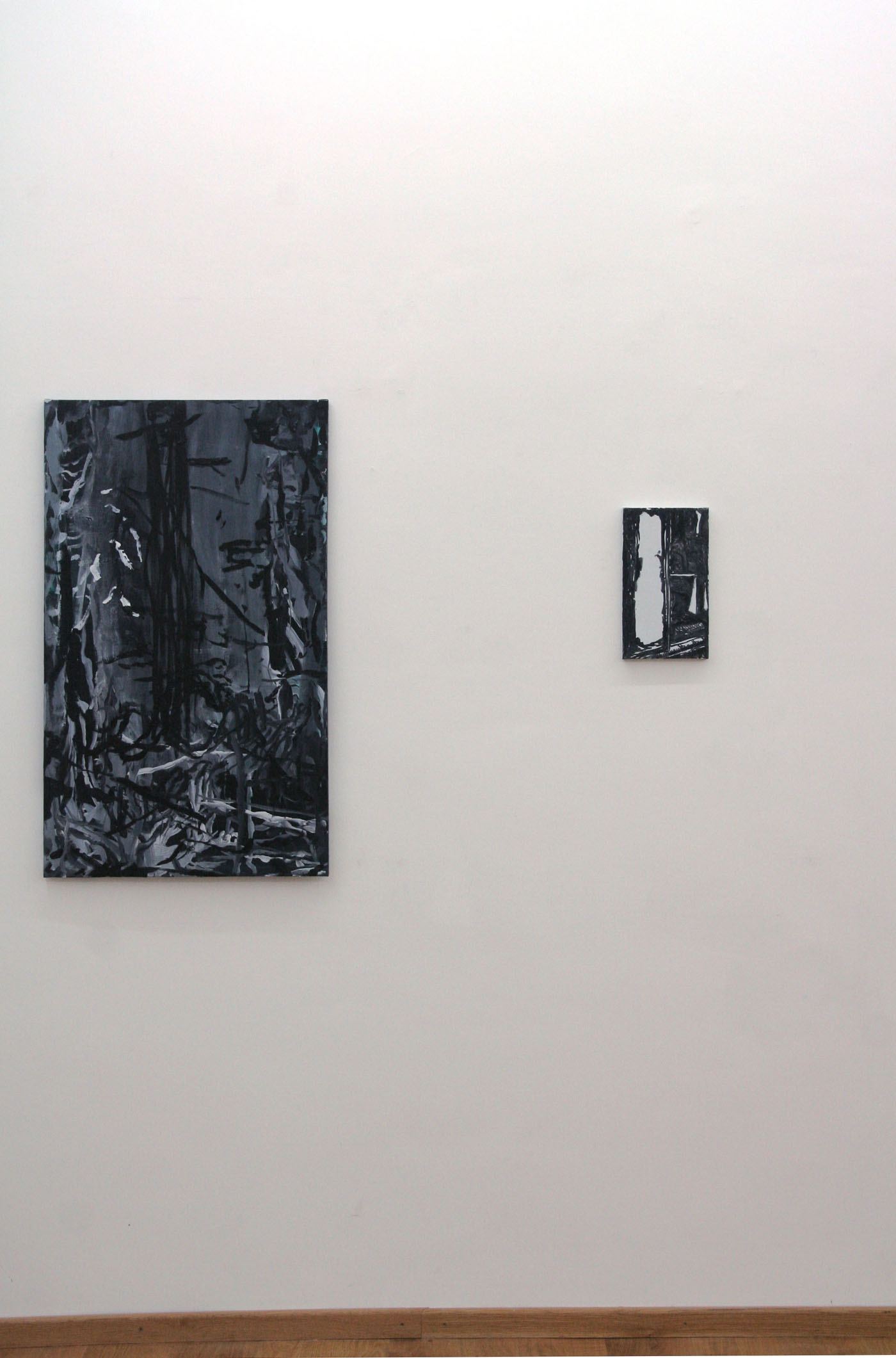 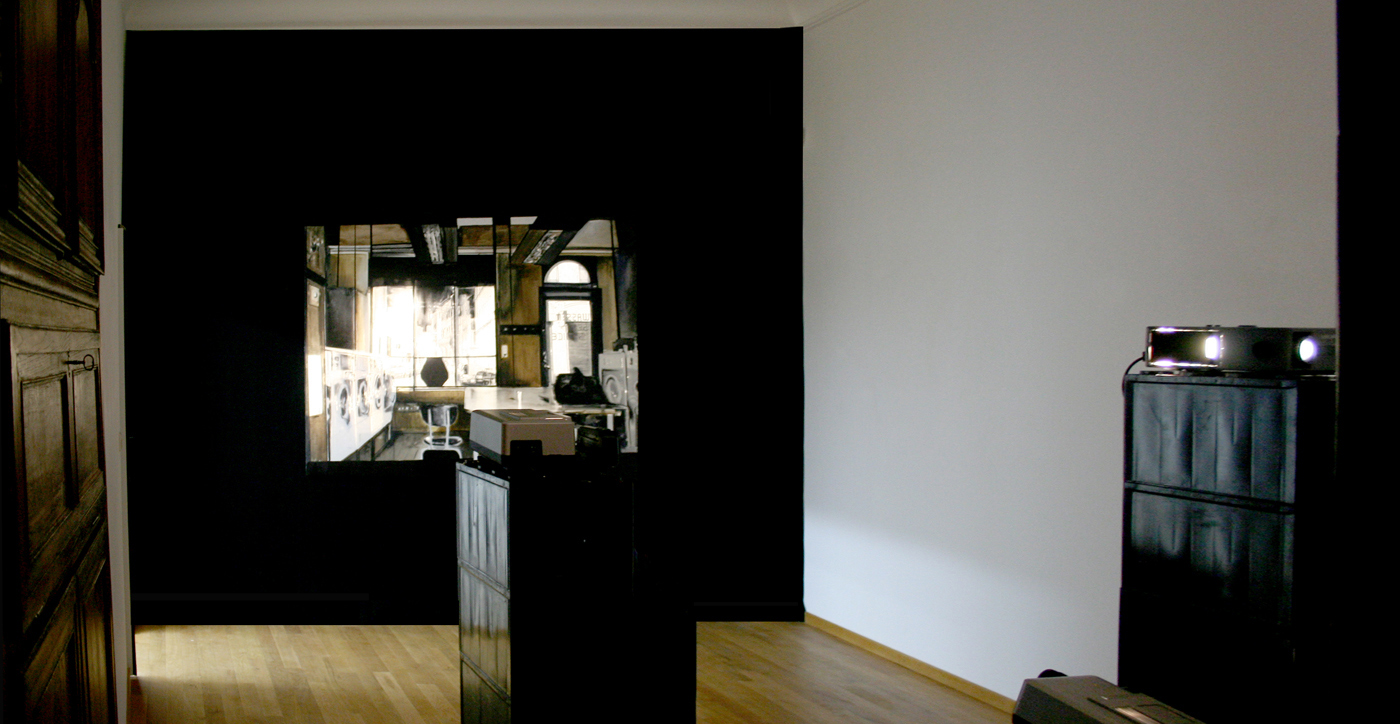 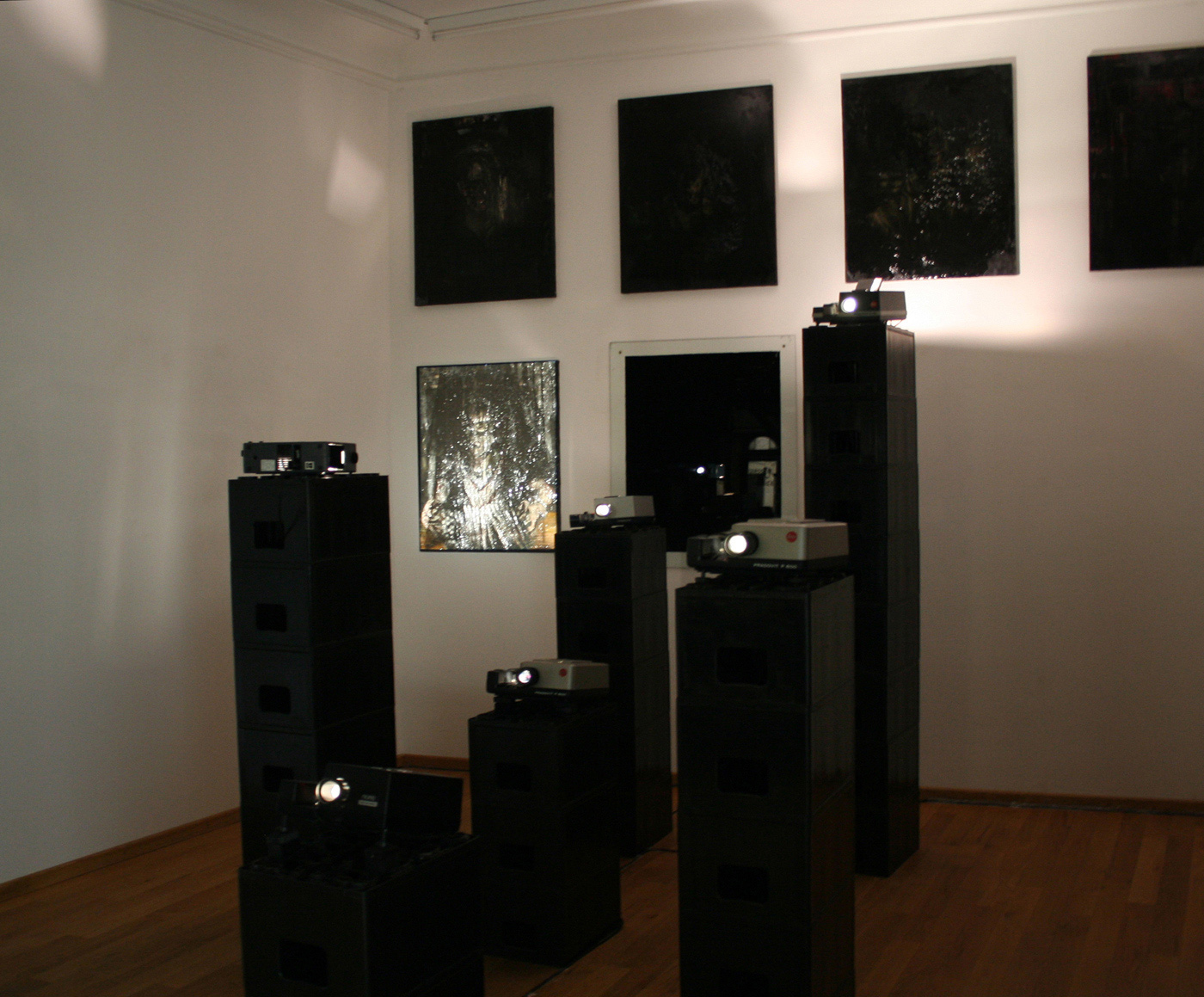 Gallery Nosbaum Reding presents an exhibition with three young—younger than thirty—Belgian artists: Steven Baelen, Manor Grunewald and Vadim Vosters. Though all three of them use drawing and painting as a medium, each artist deliberately chooses to employ these media differently.
Manor Grunewald and Steven Baelen share the first room in the gallery. For these artists, drawing is an efficient and effective means to outline new ideas and visions. It is therefore their primary means of expression. Vadim Vosters paints (or draws) dark spaces. He finds inspiration in James Ensor’s early homely, intimate scenes and the ambience of Léon Spilliaert’s work. Vosters is fascinated by the intangibility of light and how it influences and colours our perception. By using focused light to highlight his work, the painted image acquires virtual depth.

Steven Baelen (b. Roeselare, 1981, lives and works in Ghent) fills sketchbooks with densely packed drawings (or “notes” as the artist prefers to call them) of his direct surroundings. In these he explores and records everything he perceives. The “notes” breathe a homely, even intimate atmosphere. What strikes us, is the flat character of the images—a consequence of Baelen's analytical way of looking at things. Everything the artist sees, he records on the sheet of paper, without hierarchy, with only the composition in mind. This results in flat images, the notes becoming as it were a “skin” on which the artist focuses when he commences a painting. Though at first sight the sketches look true to nature, the “notes” do not correspond with reality. We could therefore rightly refer to them as false images.
Often Baelen’s “notes” acquire the character of installation drawings, which conquer space like a virus. Lending meaning to spaces is a particular feature of this still young oeuvre. In these spaces, which bear the traces of a previous life, the artist reconstructs his own familiar surroundings with charcoal. A tension results between the drawn elements and those already present in the surroundings. The space charges itself.

Baelen has made a name for himself mainly with these monumental wall drawings. Sometimes the narrative (and analytical) “notes” are the basis for paintings or drawings that tend to be more synthetical. Not the subject as such, but painting itself is central in these works. For Baelen, painting is defining, i.e. it involves coming to a (visual) conclusion. The artist himself puts it like this: “Everything I need for a painting is comprised in the ‘note”, i.e. the drawing is not a tool to reinvent reality (like Bonnard did). On the contrary: I 'use' my notes literally, as if they were photographs that tell me how to paint. As such the narrative element of the note becomes irrelevant. (That is also why I leave copies of my notes lying about in my studio, where they become smudged and damaged. In short: I leave things to chance, till a certain image starts to take shape that I can use for a painting or a drawing. Precisely because of this way of thinking I consider myself a 'fundamental painter'.”

The young artist Manor Grunewald (b. Ghent ,1985, lives and works in Ghent) creates paintings and studies, which mainly comprise drawings and collages. In these studies, Grunewald combines figures with undefined shapes, balancing between image and stain, sign and meaning. The tension thus generated turns his images into something palpable. Through minimal abstract interventions in the image, the artist raises questions about the characters and their relationships, while at the same time he underlines the signal function of the image. In this still young oeuvre, the artist sometimes alludes to the oppressive aspect of human communication. His fascination with the abstract, with patterns and visual motifs such as bark, brick, molecules, etc. constitutes an important key to his Grunewald’s oeuvre. Not only do these elements introduce an ambiguity between development and destruction, decline and construction—within the image they also function as a sort of noise that creates a short circuit at a visual and intellectual level.
The ideas Grunewald develops in his drawings and collages are transformed in his paintings in particularly dense, coherent and powerful images. Because the artist bans all narrative content and makes measured use of paint and colour, the motifs seem like heraldic emblems. Alienation and mutations of the body are often recurring themes in Grunewald’s paintings.
In Manor Grunewald’s works, we find the same fascination with the experience of space that is so emphatically present in Baelen’s installation drawings. For Nosbaum and Reding, Grunewald has created a monumental installation drawing; he also shows nine recent collage drawings that are presented as one whole. The technique of the collage was first used early in the twentieth century by artists such as Francis Picabia and Raoul Hausmann. Grunewald often combines the technique with drawings, which allows him to present new ideas and positions quickly and accurately.
For both Manor Grunewald and Steven Baelen it is the first time they present their works abroad.

Light is the main communicative element that links the work of art and the spectator. Vadim Vosters (b. Colmar, 1979, lives and works in Brussels) is fascinated by the intangibility of light and the way differences in the light influence and colour our perception. Initially, Vosters himself “lighted” his paintings in his installations. With “weird” sceneries, he creates an atmosphere that speaks a language of its own; the transparent language of light and dark. The combination of artificially focused light and matter lends a virtual depth to the image painted (or drawn) on the canvas. Later, he extended his artistic interventions to a theatrical “lighting” of sites. The city centre of Tielt (Belgium) for example inspired the headstrong performance Entrance/Entry (2008), which he turned into a video installation in the city's belfry. The video installation simultaneously projects images on three walls of a nocturnal procession of masked politicians. They march through a city that is lighted by a large spotlight, confronting us with a different perspective of the urban surroundings.
In an essay dating from 2007, Liesbet Kusters wrote about Vosters:
“Light marks the border between the visible and the invisible. Beyond that border, shrouded by darkness, there are things we cannot see, but which are there all the same. The darkness of the image causes things around us to become part of us. What is illuminated, allows visual activity, what remains in the dark, remains an unused potential, a sort of void. Yet, precisely because certain parts are illuminated, also those that remain in the darkness acquire meaning, namely through their presence. Precisely this presence “as a sort of being awake in a visually non-stimulating world” is more important to Vadim Vosters than the merely visual aspect. The intangibility of light holds a promise of tangibility. In this endeavour to make this promise come true and lend his work a physical dimension, the artist attempts to catch the light. Through the use of slide projectors this aspect becomes essential in the work Installation, Campo-Santo Ghent (2005). It is almost possible to literally ‘catch’ the beams that radiate from the projectors and the surface on which they are projected becomes a web that traps them. By manipulating the light, Vosters tries to control it and impose his will on it. To achieve this aim, he also manipulates the surface onto which the light is projected. He e.g. draws or paints onto parts of this surface, depending on the image projected, questioning the border between his intervention and the projection. But light does not only create an image, it also defines our perception of the image. For even if its content remains unchanged, as the light changes, the image acquires meaning depending on the atmosphere created. From this point of view, Vosters defines how his work relates to the public. Whereas architecture and light are supposed to impart a certain feeling of security and protection, Vosters’ installations create a sense of alienation. The focus of the artists’ attention is the inability of the viewer to fathom the structure of the image, and the ensuing sense of discomfort and distress.”

Patrick Ronse (b. Brugge, 1962) curates the exhibition. Since 2004, Ronse has been director of BE-PART, a platform for contemporary art in Waregem (B).
BE-PART invites young artists to create and present works of art.
* For this text the author used texts by Bart De Block, Edith Doove, Liesbet Kusters, Stijn Maes, and texts written by the artists themselves.